Setup your own free Minecraft Server running on releasehub.com

One of the coolest things about working at Release has been figuring out all of the fun stuff that we can do with the platform. While our main use case is helping people build environments for their applications, anything that runs in Docker will run easily on Release.

Early on, I found a handful of repos that helped us build out our platform. One that has been the most fun all along is the docker-minecraft-server from itzg. I used it in the early days because it had a little complexity and a fully working docker-compose ecosystem to play around with. It’s got the great side effect of when it runs, I let my kids test it out!

So while you’re sipping on egg nog and enjoying a 2020 Holiday season on COVID lock-down, here’s a walkthrough of how to get your very own free Minecraft server up and running on Release.

I highly recommend following along on the video tutorial. I've included step by step instructions for anyone that learns better through reading or if you're confused about a step.

If you want to see a live version of this setup, we fired up our own Minecraft server that we built using these steps. So if you're bored over the Holidays, pop in and say hello! Here's our Server name if you want to say hi.

Play Minecraft With Us on the Release Team Minecraft Server

Full video walkthrough of this tutorial

Detailed instructions to get your Minecraft Server up and running

At the time of this writing, we have a “Starter” plan that’s free so you can give this a shot and have some Holiday fun on Release. Since we’re hosting all of the environments on Release on the starter plan we have a limitation of 2Gb/container. That’s sufficient for a Minecraft server for your kids and their friends.

To get started, take a look at https://github.com/awesome-release/docker-minecraft-server, which we cloned from itzg. Fork or clone this repo into your GitHub account so you’ve got your own version of it to play around with.

Once you’ve got your own repo to work with, I recommend taking a quick read through the README, there are a lot of configuration options and the documentation is extremely well done.

We're also going to use the Rcon Web Administrative portal. Take a look at the documentation, specifically the environment variables that can be configured. itzg made a version of this for Docker called docker-rcon-web-admin that we are using when when we load the rcon and rcon-ws services in this tutorial.

For this walkthrough, we’re going to bring up a vanilla Minecraft server with an Rcon administrative portal running in a standalone container. This will let you and your kids have full control over the Minecraft server and ban friends who can’t fight off Zombie Pig Men. Here's an overview of what the system architecture looks like. 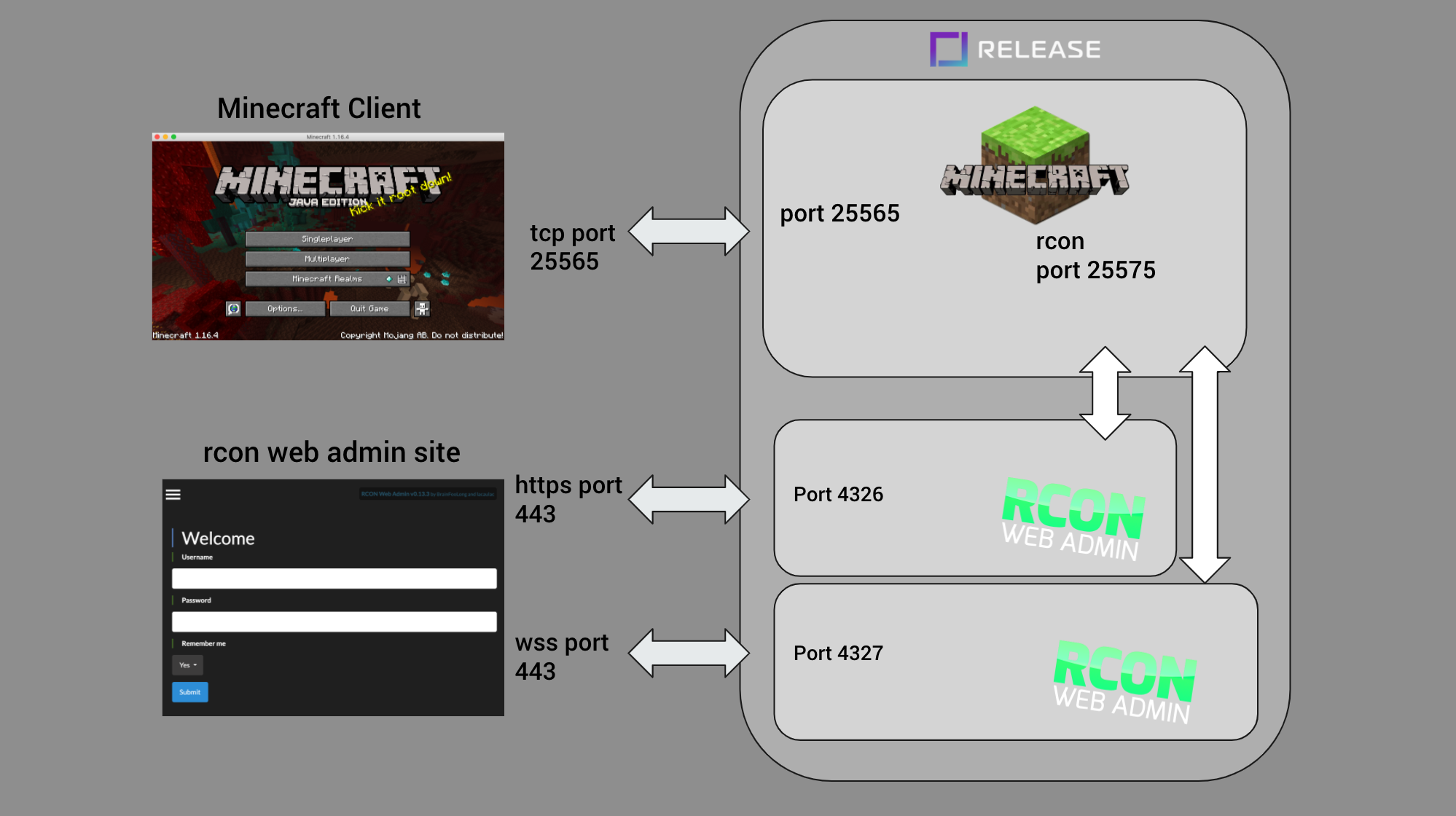 The master branch of this repo is already setup to work with this docker-compose file in Release. Take a look at the .release.yaml file in the root of the repo’s directory.

This sets the compose directive to `examples/docker-compose-with-rcon.yml’ which tells Release that’s the docker-compose file you want to use. If you want to play around with a Forge server or other examples, just point the .release.yaml file at the corresponding docker-compose.

1. Create a new application in Release 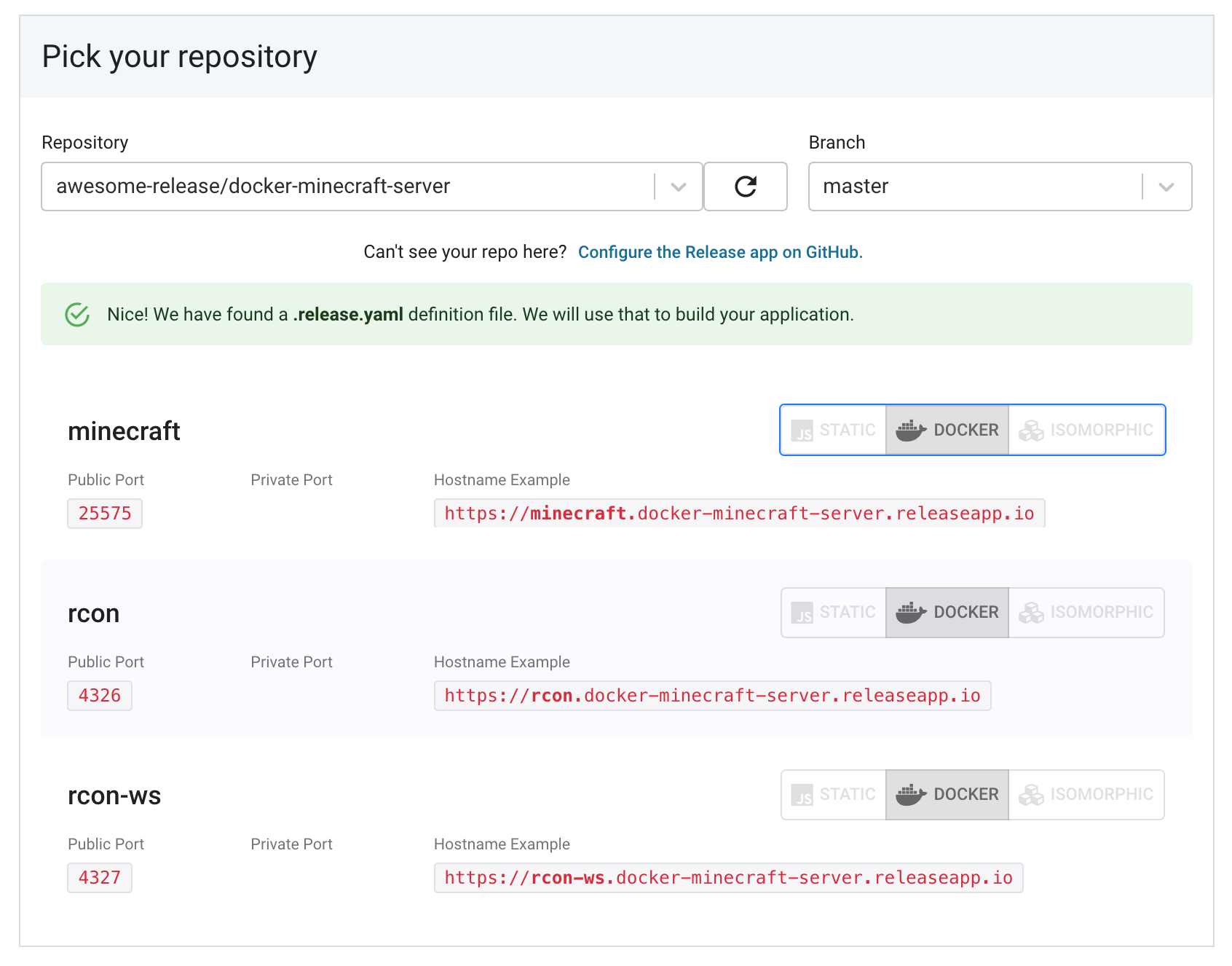 Release automatically detects and creates an application template from the docker-compose file but there are a few edits we need to make based on how this repo works and to make sure we can fit the server into the Starter plan. If you want to dive in, read the documentation about Release Application Templates.

For a little background, take a look at this diagram. 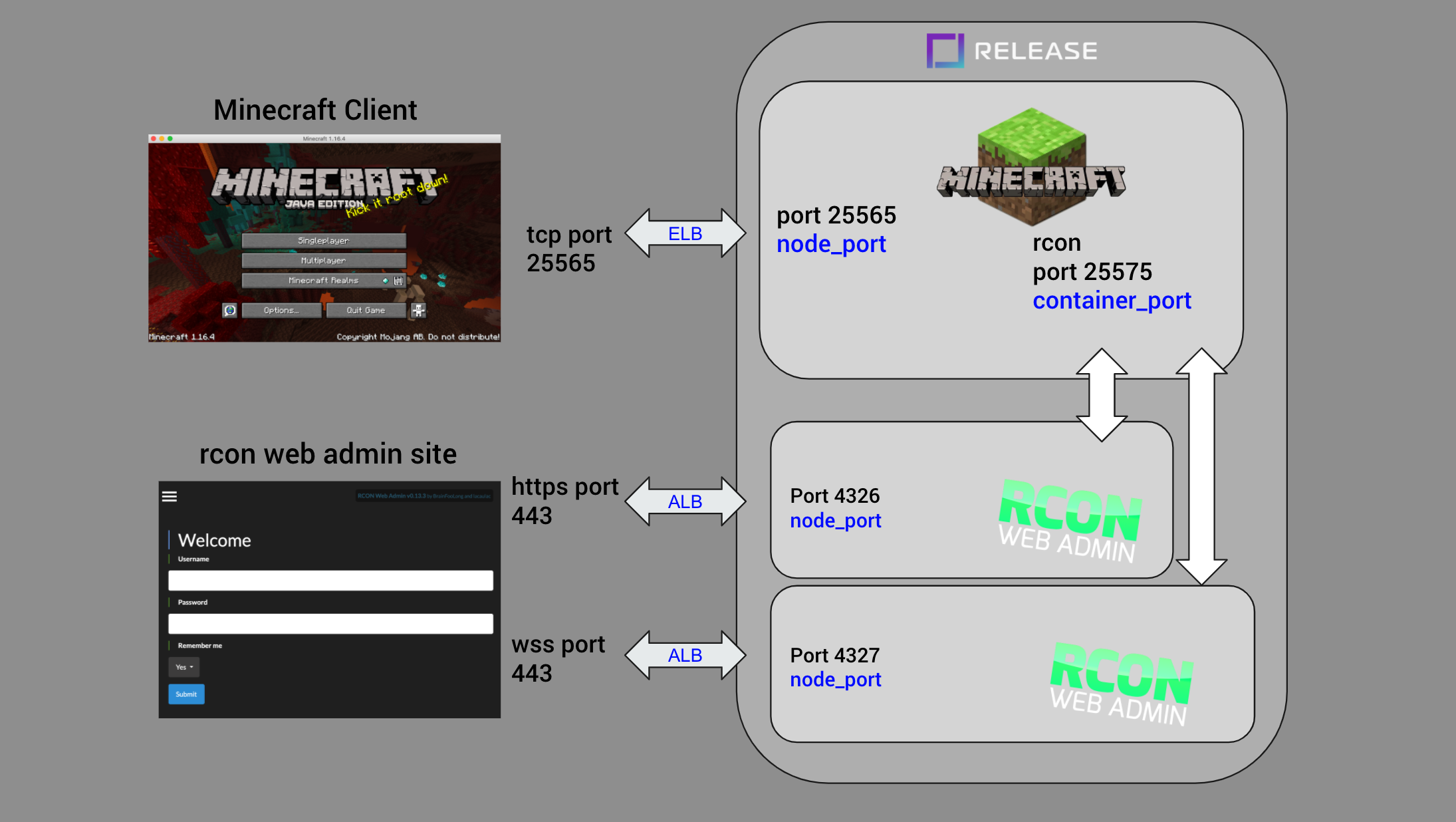 We need to make our application reflect this networking setup.

In Release we have two different kinds of loadbalancers based on Amazon's ELB's and ALB's.

We also need to make sure we're using the correct type of port for the use case. There are two types of ports container_port and node_port. In short, a node_port is exposed to the Internet and a conatiner_port is not. Because the rcon service is only internally facing, we want to set its port to a container_port. For more info on setting the correct type of port, read about ports in Release.

So let's make the changes necessary to setup the Application Template correctly. 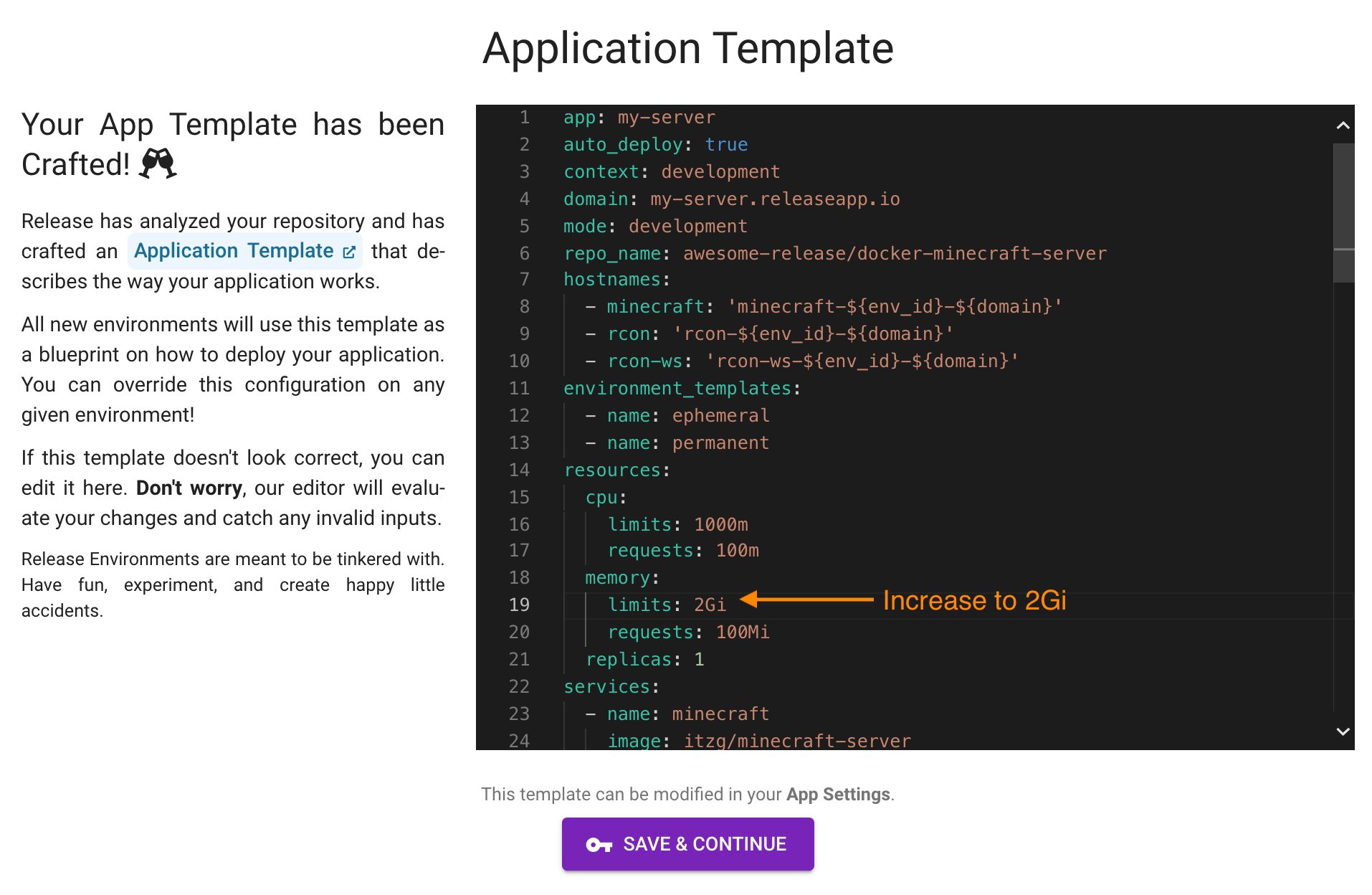 In this diagram we show the passwords that need to be set via environment variables. 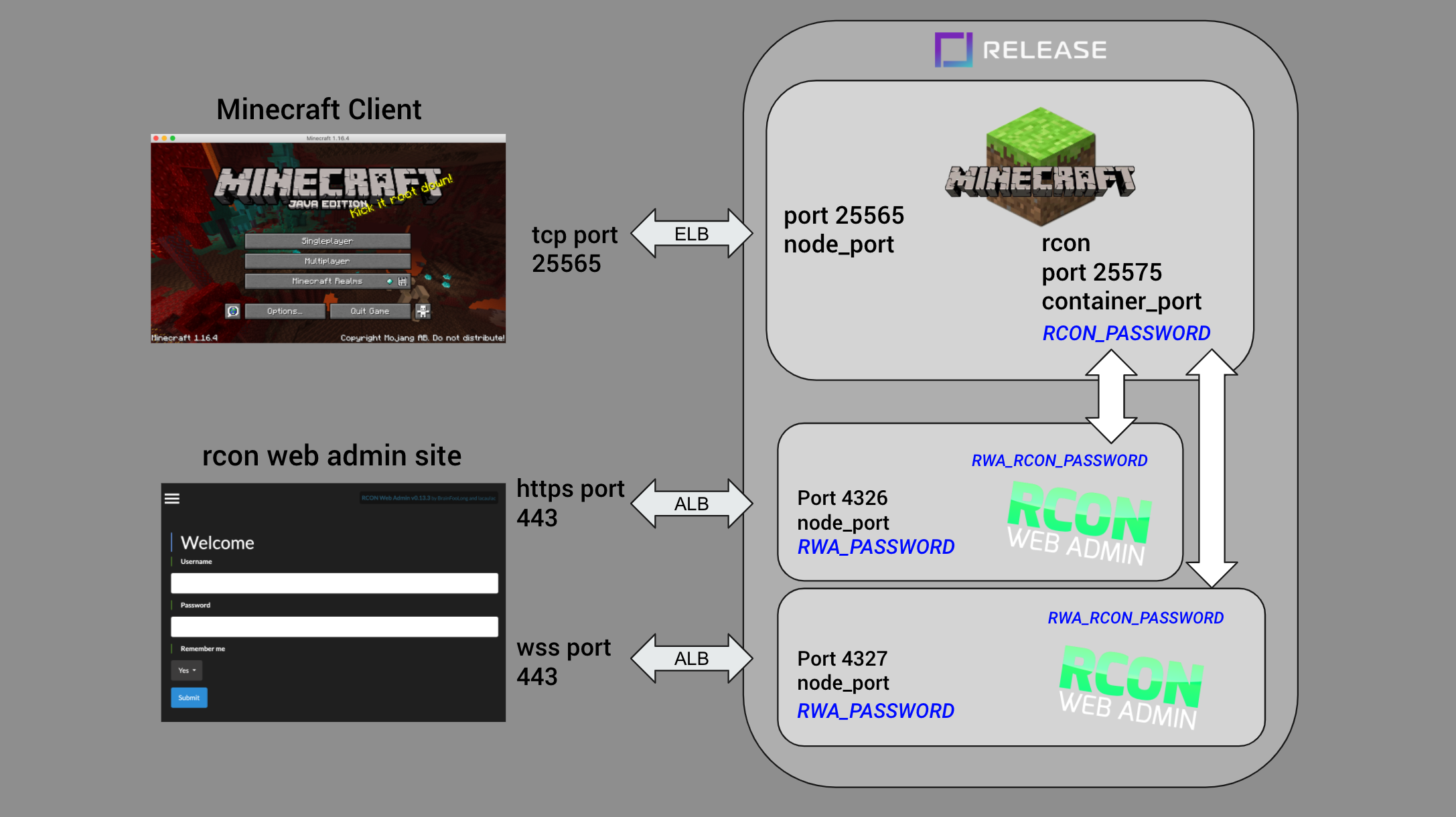 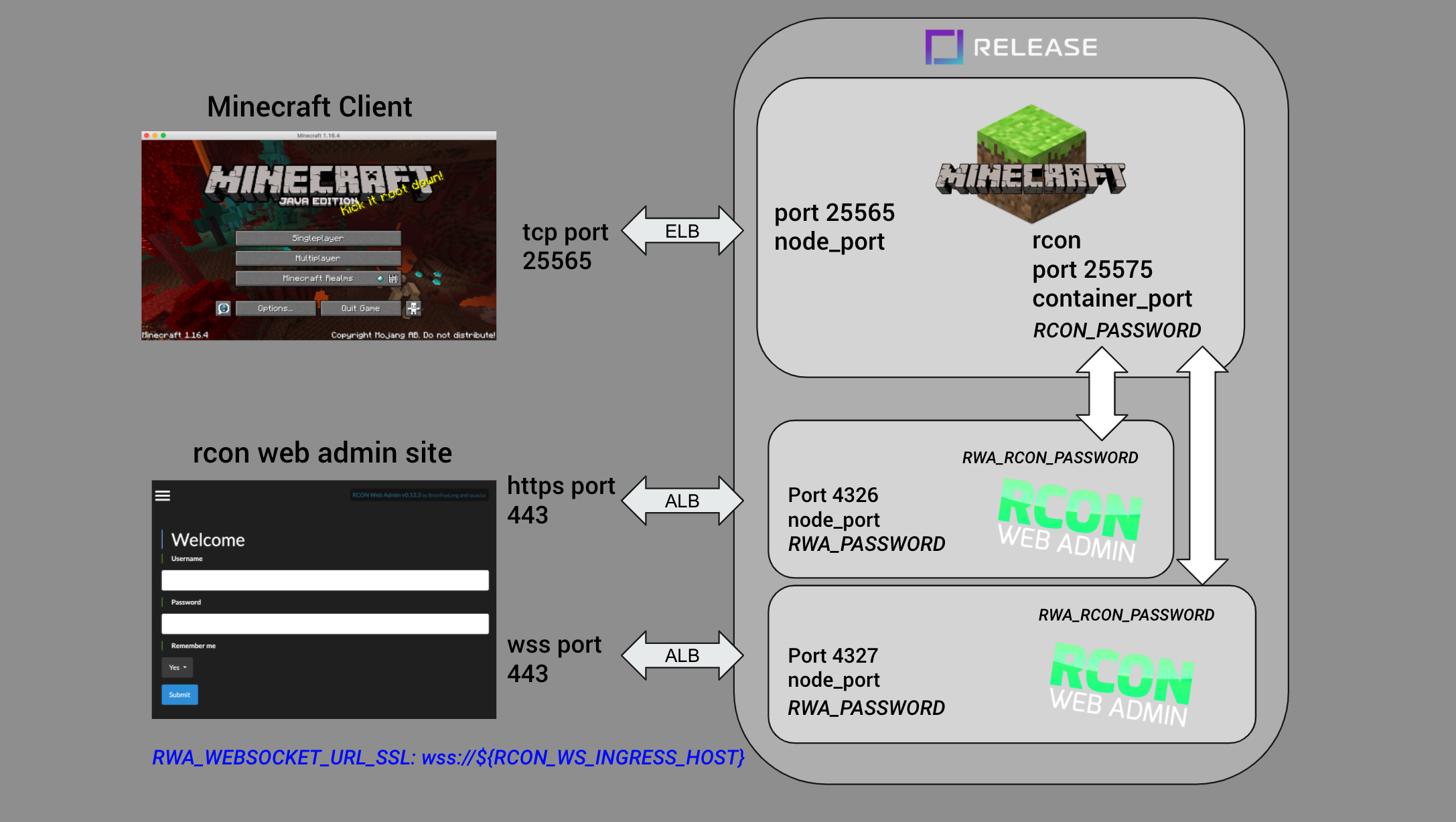 The last environment variable we need to add is a mapping that tells Release to map RWA_WEBSOCKET_URL_SSL to a dynamically created environment variable for hostnames created in Release RCON_WS_INGRESS_HOST. RWA_WEBSOCKET_URL_SSL tells the Rcon Web Admin tool which container host url is running the websocket for this service which is on our rcon-ws service on port 4327.

RCON_WS_INGRESS_HOST is automatically created everytime a new environment is created by Release and always conatins the correct hostname for rcon-ws. This value can change when new environments are created, thus we can't just hard set RWA_WEBSOCKET_URL_SSL. This is where an environment variable mapping comes into play. The diagram above represents the change we need to add in our Default Environment Variables.

When these chages and your env passwords have been made, your file should look like this:

4. Setup the Minecraft Client to Connect to your new server and login to the RCON web admin tool.

If for any reason you made a mistake and something doesn't work. You can navigate to your App Settings and edit your Application Template and your Default Environment Variables. Double check you've made the proper settings. Once you've made these edits, navigate to your environments screen, delete your environment and create a new one. The beauty of Release is environments can be torn down and up whenever you want. Here are the links to the docs on how to edit your App Template and Default Environment Variables.

Delete and Create a new Environment

You now have your very own Minecraft Server running on the Release Starter Plan. This server was created in an Ephemeral Environment in Release and will destroy itself in 7 days. If you'd like your server to remain indefinitely, you'll need to delete the environment and re-create it as a permanent environment.

Make sure you choose permanent when creating the environment.

With the RCON Web Admin tool you can control and make the server your own special place. If you have any questions, please contact the Release team at hello@releasehub.com. Jump in and say hello on our Release Team Minecraft Server here:

Happy Holidays from the Release Team!!!

Once suspended, tmcclung will not be able to comment or publish posts until their suspension is removed.

Once unsuspended, tmcclung will be able to comment and publish posts again.

Once unpublished, all posts by tmcclung will become hidden and only accessible to themselves.

If tmcclung is not suspended, they can still re-publish their posts from their dashboard.

Once unpublished, this post will become invisible to the public and only accessible to tmcclung.

Thanks for keeping DEV Community safe. Here is what you can do to flag tmcclung:

Unflagging tmcclung will restore default visibility to their posts.