We are getting to the end of this series with some behavioral patterns in Go. Today I'm bringing you the Mediator Pattern.

How to implement it? 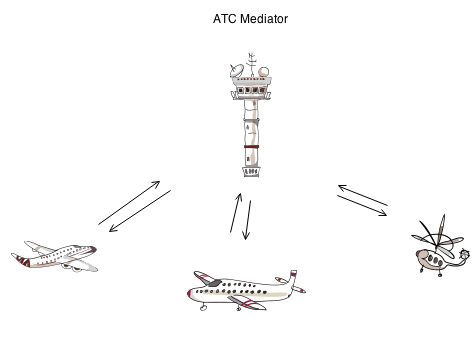 Following our steps from the previous subtitle, we need to detect our coupled classes:

We have a lot of subclasses that will actually behave similarly and that will need to communicate among themselves in order to coordinate how will they land on the runway.

The issue here is that if we create a lot of methods for communication among the classes, we will need to keep adding validations as soon as we add new AirTransports and the objects will become too convoluted and dependant.

So let's create an interface for our communication method:

Now we need our Runway which will implement the mediator interface:

This Runway is implementing the communication method from the declared interface and also adds two new methods to Message The AirTransports privately and a method to join the Runway.

So now we can actually implement our communication methods for the AirTransports:

So what we are doing here is relying on the Runway as a mediator for every message sent and received granting a log for the communication and a separate log for every AirTransport.

That's mostly the implementation. So let's jump into the instantiation:

We are creating a simple Runway and three different AirTransports. We are also making them communicate among them. This brings us to the results:

As you can see, in the terminal we will get all the logs from the pilots (or AirTransports) who are communicating over the mediator. The messages are repeated because they are broadcasted through all the users.

That's mostly it for this example
Happy Coding!