Haven't read the previous article yet?

- Check out the first part of the Vue-Docker series.

Now that we have Docker installed and scaffolded our project, we can start developing. Let's begin by adding the following to the Dev.Dockerfile:

In case you wonder about the absence the  npm install command: We'll use the vue_helper container image from the first article to manage npm packages.

We can build the development container by running:

You should then receive a container named vue_app. With it, we can start development.

Note: Given you have read the previous article, you'll notice a slight difference in the build commands. Previously, we've used the STDIN method to read the content of the dockerfile. While it's generally a bit faster, it specifies no build context to the Docker daemon. If you try and replicate the STDIN way to build the development app's container, you will run into an error:

The difference, in a nutshell, is that:

To develop, we must keep the container's content synchronized with our local source code. This can easily be achieved by using a bind mount.

Let's launch the development container by executing the following command:

If you are trying to get the container up with Vite instead of the Vue CLI,  you must currently (30.10.2021) pass a --host flag in your package.json file:

When the container is running, the app can be accessed over a browser. Open a new tab at http://localhost:8080 and you will see the familiar Vue boilerplate. And thanks to the bind mount, modifications to the code on your local machine will be replicated straight into the container. Vue CLI will pick these up and reload the browser page.

Finally, try and change the msg property of the HelloWorld component. If the change is visible inside your browser - congratulations - you've successfully set up your own Docker dev-environment 🌟. 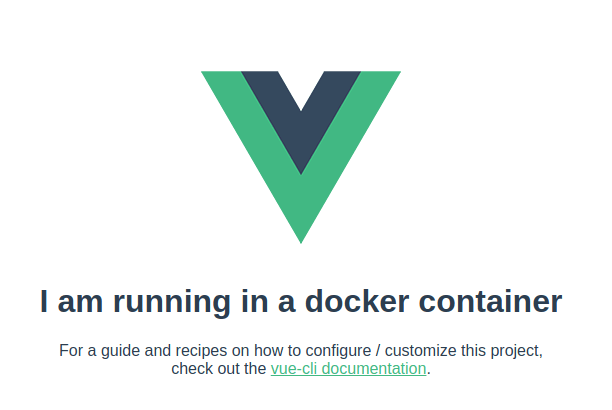 You can now change the application to your heart's desire.

In the repository for this article, I've created a simple to-do-list application that we can deploy later.

Prepare the app for deployment

We can already create & manage an app, as well as develop its source code using Docker. What's left to do is to make it ready for a productive environment - without the dev-server overhead.

There are several ways to do so. You could use the example from the Quick & Dirty article I wrote earlier, that is, a custom Express.js server. But why reinvent the wheel if there's a container to the rescue?

The example you find below is inspired by the official Vue 2 Docs. It works equally well with any other kind of JS framework that use Webpack or Vite.

Let's fill the remaining Deploy.Dockerfile with life by adding these commands:

Docker can interpret these to declare two distinct stages. This procedure is commonly referred to as 'Multi-Stage Building'.

Stages refer to one another by using the --from - flag. Like this, you can streamline your development workflow. You could, for instance, extend the above commands by adding one or several test phases.

At this point, you can also configure Nginx as per your project's requirements. Check out the official docs on Dockerhub for more information.

Once you're ready to ship your app, run:

You will receive an image that includes an optimized version of your app. It can be launched anywhere Docker is installed:

The application will then be available under http://localhost.

I've collected all the code from the first two articles together in a Github Repos. You are welcome to use it either as a boilerplate or Proof of Concept.

While you could use the example as-is, there's still room for improvement. So in the next and final article of the series:

This post was originally published at https://blog.q-bit.me/a-step-by-step-guide-for-developing-and-deploying-a-vue-js-app-with-docker-part-two/
Thank you for reading. If you enjoyed this article, let's stay in touch on Twitter 🐤 @qbitme

Dear Senior Devs, Use your privilege

tq-bit
Tobias is a selftaught web developer who loves reading, coding and cooking. On sunny days, he can be found hiking through the Teutoburg Forest, on rainy days he preferes a good fiction novel
Quick & Dirty: How to add a client search feature to your Ghost blog
#javascript #webdev #css #opensource
Let's build Vue directives: Scrolling elements into view
#vue #javascript #todayilearned
How to monitor the progress of a Javascript fetch - request and cancel it on demand.
#javascript #webdev #http