You have never used Docker before and you are a JavaScript developer. You want to understand how to use containers together with Node. Lets’ go!

In this tutorial I will be using my favorite editor Visual Studio Code. You will also need Nodejs and Docker installed. In my case I’m using Windows, so I got Docker for Windows from here.

Next command creates a new folder with name test-node-app, then creates npm package file and opens folder in VS Code.

You should see following in the console and will be able to access the server on the link http://localhost:8080/

To build our image we need a docker file. Create a file with name Dockerfile

And paste this inside:

This file tells docker to download Node.js of version 8, create directory for the app, copy there package.json files, run npm install for node_modules, tells which port this app wants to use and finally runs it with npm start.

We will also need a file called .dockerignore. Create and paste following inside:

First of all, build our image with this command.

Wait until it finishes and now we can see new image created.

If you are using VS Code, you can install a very nice Docker extension. It adds a button to side panel which opens Docker explorer. Here you can see all available images and containers. From there you can run, stop and remove containers which is pretty useful. 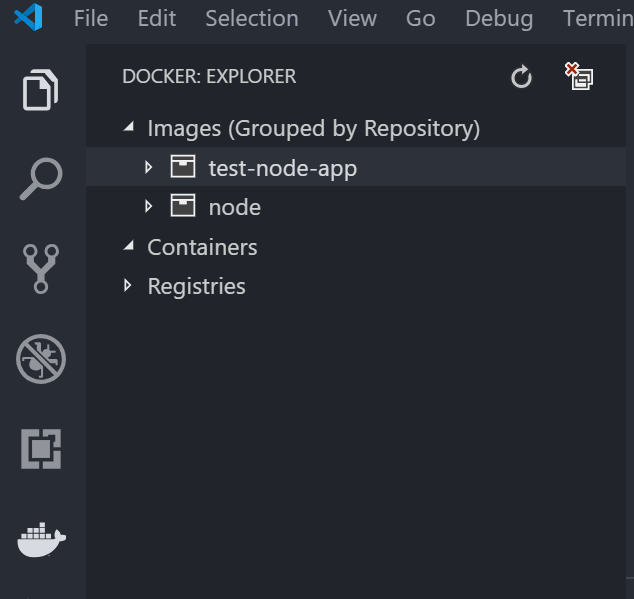 If you want to remove an image run this:

Time to run a container based on our image (our application in isolated environment). The important thing is that we need to tell docker how to map the port. Now we run our container and map 8080 port to 49165.

Which means we can now access the app by this url http://localhost:49165/

There is another very useful command to see all running containers:

You can stop container by right click in VS Code Docker Extension or by this command:

Now if you run docker ps again you will not see your container running. If you want to see stopped containers you need to add —all flag to the command like this:

If you still have some questions you can easy refer to official documentation here.

🚀 If you read something interesting from that article, please like and follow me for more posts. Thank you dear coder! 😏

Once suspended, vguleaev will not be able to comment or publish posts until their suspension is removed.

Once unsuspended, vguleaev will be able to comment and publish posts again.

Once unpublished, all posts by vguleaev will become hidden and only accessible to themselves.

If vguleaev is not suspended, they can still re-publish their posts from their dashboard.

Once unpublished, this post will become invisible to the public and only accessible to Vladislav Guleaev.

Thanks for keeping DEV Community 👩‍💻👨‍💻 safe. Here is what you can do to flag vguleaev:

Unflagging vguleaev will restore default visibility to their posts.