Containerization of an application is not the end of story.
For any serious application, it’s the beginning of a new world of orchestration.
We need to think about many things, such as:

It’s not as easy as it seems, even for a simple use case.
So, what can we do about this? That’s where an orchestrator comes into the picture.

The official documentation defines Kubernetes as:

Kubernetes, also known as K8s, is an open-source system for automating deployment, scaling, and management of containerized applications.

Running containers on a single host or running a single container is not sufficient for a large-scale application.
We need a scalable solution like K8s which can handle the containers on scale and in fault-tolerant manner.

The biggest advantage with K8s is that if an application can run in a container, it would(most probably) run on K8s irrespective of the underlying infrastructure.

K8s provides an abstraction over the underlying infrastructure which makes it possible. 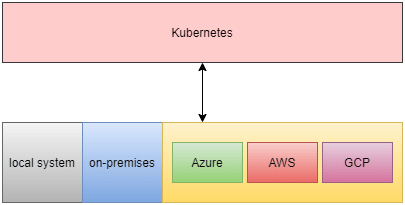 Control plane with the help of master nodes, manages the state of a k8s cluster.
It is not recommended to run user applications on master nodes. 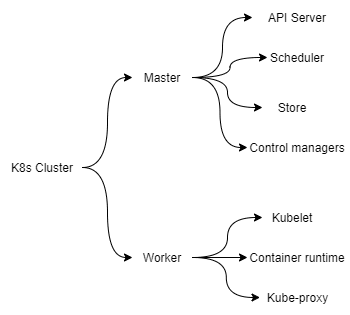 In a K8s cluster, control plane with master nodes manages the worker nodes, and the overall cluster.
Let’s see what is inside the control plane.

It watches for the new tasks(newly created pods) submitted to K8s cluster, and selects a worker node that can run those pods.
To select a worker node, it considers the health of worker nodes, their load, affinity rules, any other software or hardware requirements.

K8s uses etcd to store config and state of the cluster. etcd is strongly consistent and reliable distributed key-value store. Please note that the etcd is not used to store data of containers or user applications, it’s only for cluster state.

It manages and runs controllers, and responds to various events.
A controller’s main job is to monitor the shared state of the cluster and make every possible change to achieve the desired state if the current state is not the desired state, more on this later.

This is specific to the cloud on which a K8s cluster is running. If you’re not running K8s on a cloud, there will be no cloud controller manager.
From Kubernetes docs — the cloud controller manager lets you link your cluster into your cloud provider’s API, and separates out the components that interact with that cloud platform from components that only interact with your cluster.

When we on-board a workload/app on k8s, we tell k8s what’s our expectations eg. We need 3 containers always up and running.

So, this becomes the desired state of our cluster. Generally, it is part of the different payloads like your Pod deployment config in which you may define the number of replicas.

So, let’s say, we started with 3 replicas of our container.

After time T, one replica crashed.

And the good thing is — it will do it in an automated way.

A worker node is responsible for running a user application.
On a very high level, a worker node:

A worker node is a combination of:

The diagram summarizes the flow that we’ve seen up till now.

Let’s now look at some of the most critical K8s objects.

Pod is a wrapper around a container. It is the smallest deployable unit in K8s.

So, when we provide a Docker image and ask K8s to run and manage a container, it creates a Pod for that application. The containerized application runs inside the Pod.

It’s recommended to have one-container-per-pod container, but a Pod can have multiple related containers.

A Pod has a template that’s generally defined in a YAML file which tells what kind of container a Pod should host.

When a Pod goes down, K8s creates a new Pod.

Each new Pod has a different IP.

If a Pod has more than containers — those containers will share the same Pod IP and other network resources. 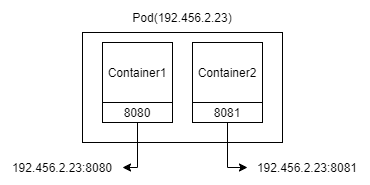 A ReplicaSet is another K8s object that acts as a wrapper around Pod. It is managed by DeploymentSet.

A ReplicaSet’s purpose is to maintain a stable set of replica Pods running at any given time.

The ReplicaSet knows from its config the Pod to run and how many replicas are needed. It then uses the Pod template to create those many replicas of a Pod.
To scale the application, ReplicaSet creates new Pods. 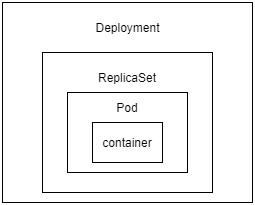 When a Pod goes down, K8s creates a new Pod with a new identity but from the same Pod template, and the new Pod will have a new IP. So, basically, the old Pod is lost.

StatefulSets can be used to manage the Pods when we need to retain the Pod identity.

StatefulSets are useful for stateful applications. They’re similar to Deployments but when a StatefulSet relaunches a container, it retains Pod’s identity, also called — sticky identity.

The sole purpose of a ReplicaSet is to maintain a stable set of replica Pods at any given time.

Here’s how it works in K8s-
Let’s suppose, we have a Java application.

During this whole process, K8s keeps running the application, there’s no downtime.

A Service is an abstraction which defines a logical set of Pods and a policy by which to access them . The set of Pods targeted by a Service is usually determined by a selector.

A Service is a logical grouping of a set of Pods which also acts as a load balancer of that set.

Pods can talk to each other via Service.

A call from outside of K8s cluster is intercepted by the Service which then forwards the request to a certain Pod from its set.

So, Service also acts as a network abstraction which hides all the networking complexities.

Main components of a Service

There are two main components of a Service:

How does a Service form a group of Pods?

The service uses a label selector to select the Pods.

Labels are simply a set of key-value pairs that we can attach to certain K8s objects like Pod.

Let’s suppose, we have three Pods P1, P2, and P3. And, we have two labels — env and version
Here’s how these Pods are tagged with these labels:

So, based on this, Service will have two Pods in its set — P1 and P3
P2 won’t be selected by the Service because while its env label matches with value prod, but version is different — Service expects version=1.0 and P2 has version=1.1

There are mainly three types of services:

Volumes are used as a storage solution for a K8s cluster.

We use or mount volumes to store the application data permanently so that if a Pod is crashed and started, it would not loose its data.

K8s uses a plugin layer to handle the volumes so it is capable of working with different types of storage solutions.

For instance, we can use a Azure Disk, EBS, etc. as a storage solution.

It acts as a storage abstraction which provides APIs to access and manage persistent storage.

These are storage requests made by the user. Users request for a Persistent Volume based on certain criteria, and if a persistent volume is found, it gets linked to the PersistentVolume Claims.

ConfigMap is a K8s object which is used to store non-sensitive Pod configurations. This is a key-value pair.

For sensitive data, it is recommended to use Secrets rather than ConfigMap.

ConfigMap is a great way to separate configs from the code.

ConfigMap can be injected into a container in three ways:

The only problem with first two is that these are static.

So, once an app gets started, and if there’s any change in the ConfigMap then it won’t be reflected until we restart the app because there’s no way to reload ConfigMap which was injected via environment variables or startup command.

Third option, using volumes, is the most flexible way where we create a volume for ConfigMap. Any change in the file will be reflected in the volume, and will be picked by the application.

Feel free to check out my page https://www.vmtechblog.com/search/label/kubernetes

Once suspended, vmtechhub will not be able to comment or publish posts until their suspension is removed.

Once unsuspended, vmtechhub will be able to comment and publish posts again.

Once unpublished, all posts by vmtechhub will become hidden and only accessible to themselves.

If vmtechhub is not suspended, they can still re-publish their posts from their dashboard.

Once unpublished, this post will become invisible to the public and only accessible to vmtechhub.

Thanks for keeping DEV Community 👩‍💻👨‍💻 safe. Here is what you can do to flag vmtechhub:

Unflagging vmtechhub will restore default visibility to their posts.