This series is about sharing some of the challenges and lessons I learned during the development of Prism and how some functional concepts lead to a better product.

In this specific post, I will start explaining what Prism is, detail some of its key features and discuss a little bit about its domain and its intended audience.

This will hopefully help you understand the technical choices I made that I will cover in the next articles.

Turn any OpenAPI2/3 and Postman Collection file into an API server with mocking, transformations and validations.

For those of you that aren't familiar with such, OAS2/3 and PC are essentially specifications defining a standard and language-agnostic interface to (possibly RESTful) APIs.

To be a little bit more pragmatic:

This YAML file is an OpenAPI 3.0 document claiming that:

We aren't going to go too much into detail about these formats; if you’re interested, you can go and read the official specifications:

Despite this simple example, we can say that all the specifications allow (with some nuances) to specify pretty complicated scenarios, ranging from authentication, request and response validation, to web hooks, callbacks and example generation.

A mock server is nothing more than a little program that reads the description document and spins up a server that will behave in the way that the document mandates.

Here's an example of Prism starting up with a standard OAS3 document: 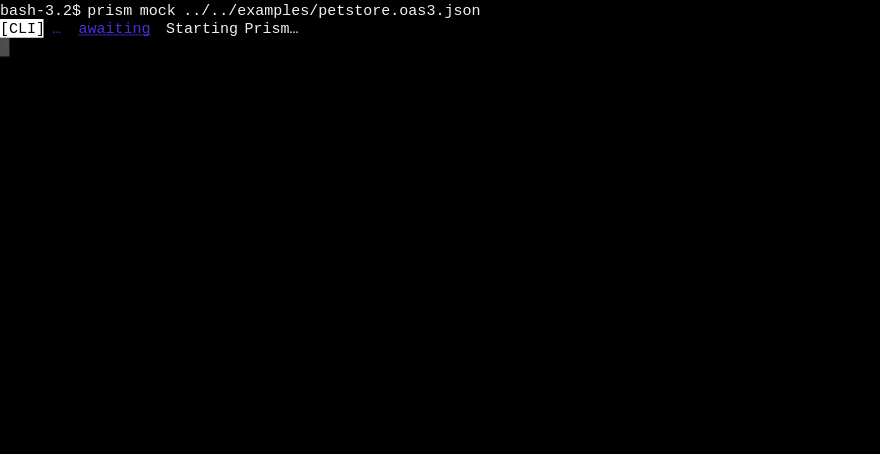 Technical decisions and trade-offs were driven by features. Here are the most relevant ones regarding this series:

Prism is written entirely in TypeScript. Primarily because Stoplight's stack is largely based on NodeJS and TypeScript.

We are using the maximum level of strictness that TypeScript allows.

A Lot Of Custom Software

Prism is not using any of the web frameworks you usually find on the market and employed for web applications, so you won't find Express, you won't find Hapi, nothing.

It was initially written using Fastify; and at that time I was not working on the project. I ultimately decided to remove it in favour of a tiny wrapper on top of the regular http server that NodeJS offers.

In case you are asking, the main reason for this is because most of the frameworks focus on the 80% of the use cases, which is totally legit.

On the other hand, Prism aims for 100% compatibility with the document types it supports, and, for instance, some of them have some very…creative parameters support that no parser on the market supports.

Another example? OpenAPI 2 and 3 are using path templating, but not the same as URI Templating specified in the RFC6570. For this reason, a custom parser and extractor had to be defined.

This specific case, together with other ones that required special code to be wrote, led us to gradually dismantle and neglect different Fastify features until I realised that we were not using it at all if not for listening on the TCP port; on the contrary, we were just fighting it because it was too opinionated on certain matters, such as errors.

Prism contains a custom made negotiator — which is that part of the software that taken an incoming HTTP Request, its validation results (headers, body, security) and the target API Specification document will return the most appropriate response definition that can then be used by the generator to return a response instance to the client.

The negotiator itself is kind of complicated, but I think we've done a good job in both documenting its decision process: 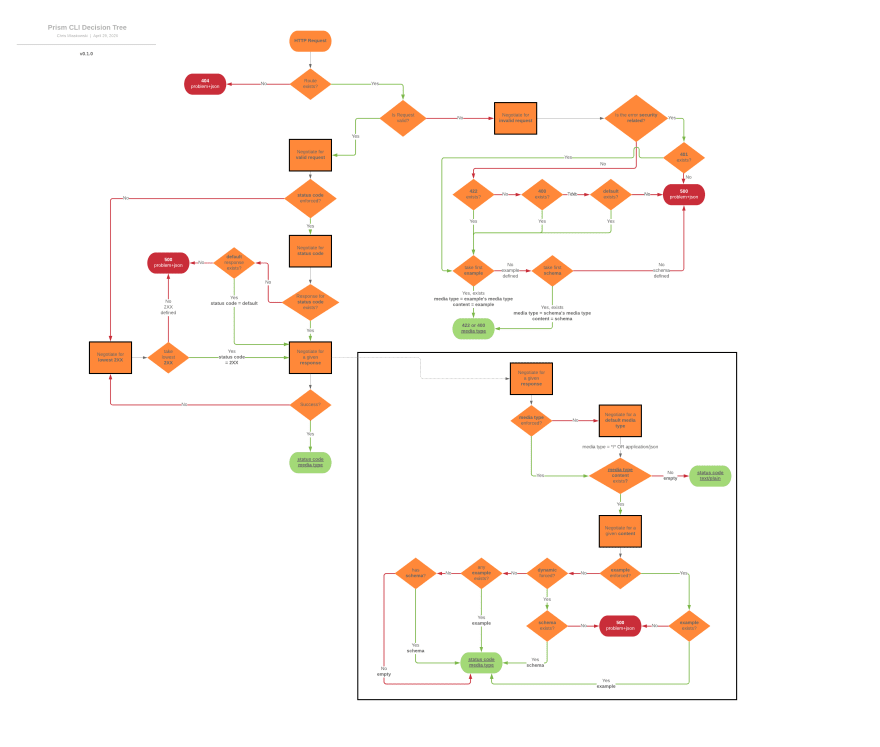 The diagram is also pretty much reflected in the code as functions division.

One of Prism's key features is the extensive validation.

Based on the provided API Description document, Prism will validate different parts of the incoming HTTP request, ranging from deserialising the body according to the content-type header and then checking the resulting object with the provided JSON Schema (if any).

The input validation result will influence the behaviour of the negotiator as well as the proxy's one.

It turns out that validation is a very complicated part of Prism and, although we have reworked it several times we still haven't got that right.

The journey of an HTTP Request from hitting your application server to return a response to the client is articulated.

We often do not think about it because the web frameworks do usually a very good job in abstracting away all the complexity.

Since Prism is not using any frameworks, I fundamentally had the opportunity of reimplementing almost the whole pipeline — and I started to have observations.

Here's what Prism is doing when a request is coming in:

Here comes the first key observation: almost every step that Prism executes might fail, and each failure has a specific semantic meaning and precise status code is associated.

Last time that I checked, on over 32 "exit paths", 30 of these were errors and only two of them were a "successfully returned response". Doing some math:

This fundamentally says that, in case of evenly distributed exit paths occurrences, only 6% of the request will be successful.

Are the exit path occurrences evenly distributed? Although I do not have a specific answer to that (but hopefully we will, since we're gathering statistics in the hosted version of Prism) — we have some empirical evidence I’ll talk about in the next paragraph that we can keep in mind.

Prism is a developer tool and, although it can be used as a runtime component, it is primarily used by API designers and client developers during the development phase of the API.

This is a very important detail since the typical developer that is using Prism has totally different aims from a regular API developer. The following table summarised some the differences that I've identified with an Application Developer

When you're developing an application, you're likely striving for success — and so you're going to create all the requests you need with likely valid data, likely following the flow indicated in the documentation.

On the other hand, when mocking an API with Prism, you're deep in the design phase. You'll probably tweak the document multiple times per minute (and Prism will hot-reload the document). You'll likely send invalid data all the time because you just forgot what you wrote in the document. You'll try weird combinations of stuff that is never supposed to happen.

We stated some paragraphs before that in case of evenly distributed exit path occurrences, only 6% of the request will be successful.

Now that we have clarified a little bit the typical user of Prism, it's fair to say that the exit paths occurrences are clearly not evenly distributed and, although we can't give a precise number, we can claim that's heavily leaning towards the errors side.

Essentially, when you send a request to Prism, most likely you'll get an error as a response.

After thinking a lot about this, I wrote this sentence that was the key factor to radically change Prism's architecture.

Prism's job is to return errors.

In the next article we'll talk about the abstraction used to model such use cases correctly and how I found it accidentally.

Once suspended, vncz will not be able to comment or publish posts until their suspension is removed.

Once unsuspended, vncz will be able to comment and publish posts again.

Once unpublished, all posts by vncz will become hidden and only accessible to themselves.

If vncz is not suspended, they can still re-publish their posts from their dashboard.

Once unpublished, this post will become invisible to the public and only accessible to Vincenzo Chianese.

Thanks for keeping DEV Community 👩‍💻👨‍💻 safe. Here is what you can do to flag vncz:

Unflagging vncz will restore default visibility to their posts.