Stack Overflow released the results of their annual developer survey last week, and for the fifth consecutive year Javascript checked in as the most popular language. This year, 62.5% of developers reported using Javascript, significantly more than the next non-query language, Java (39.7%).

Javascript is not only popular, but increasingly so, up from 54% in 2015. Its five-year trend, as well as those of other prominent languages can be seen in this graph: 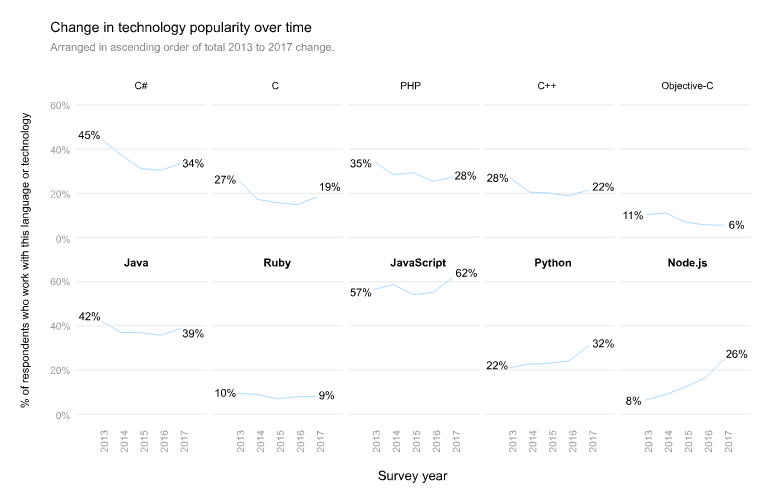 There are a few straightforward reasons for JavaScript's popularity. The language is simple enough to pick up quickly, flexible enough to be used on the client and server side, and comes built into your web browser. As Jeff Atwood, Stack Overflow's cofounder, wrote about a decade ago in the blog that would become his website: "any application that can be written in JavaScript, will eventually be written in JavaScript."

We shouldn't rush to crown JavaScript the greatest language to grace our hard drives though. The survey's respondents are overwhelmingly web developers, making their preference for JavaScript somewhat of a foregone conclusion. Plus, being the most prevalent language doesn't map directly to being the most enjoyable or profitable.

In fact, 40% of Javascript users didn't report the desire to keep working in the language, compared to just 27% of Rust users and 33% of those who use Smalltalk (a niche language that you most likely won't find in a bootcamp curriculum). And while Clojure developers report average salaries of nearly $80,000, JavaScript devs are much closer to the middle of the pack at about $55,000. 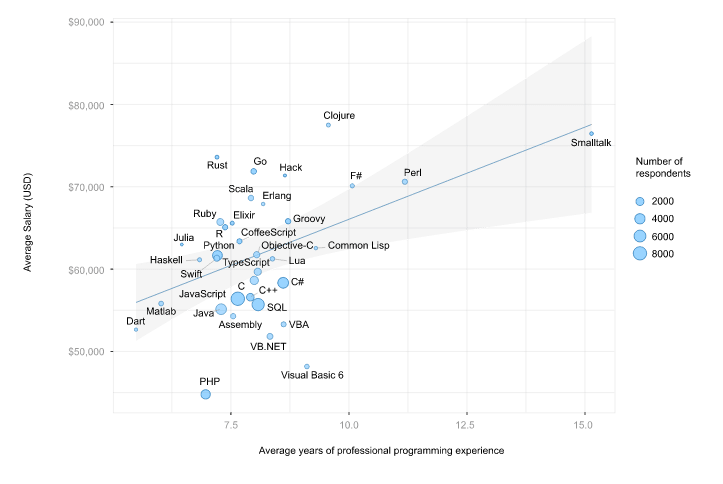 None of this comes as much of a surprise. Economics 101 tells us that JavaScript's ubiquity makes it a skill unlikely to demand top-level wages, and the language's warts have long been comedic fodder in the dev community:

Of course, the very code that I used to embed that tweet relies on Javascript. So while we may poke fun at the language, the majority of us will probably still be using it by this time next year, when Stack Overflow releases its 2018 results.