Plain text is made up of printable characters in a form that can be read and understood directly by people,
e.g: Fieldl9=467abe is meaningless, DrawingType=UMLActivityDrawing is better.

#21 - Use the Power of Command Shells

Every woodworker needs a good, solid, reliable workbench, somewhere to hold work pieces at a convenient height while he or she works them. The workbench becomes the center of the wood shop, the craftsman returning to it time and time again as a piece takes shape. For a programmer manipulating files of text, that workbench is the command shell.

We think it is better to know one editor very well, and use it for all editing tasks: code, documentation, memos, system administration, and so on

Embrace the fact that debugging is just problem solving, and attack it as such. It doesn't really matter whether the bug is your fault or someone else's. It is still your problem.

If your first reaction on witnessing a bug or seeing a bug report is "that's impossible," you are plainly wrong. Don't waste a single neuron on the train of thought that begins "but that can't happen" because quite clearly it can, and has.

We worked on a project where a senior engineer was convinced that the select system call was broken on Solaris. No amount of persuasion or logic could change his mind (the fact that every other networking application on the box worked fine was irrelevant). He spent weeks writing work-arounds, which, for some odd reason, didn't seem to fix the problem.
When finally forced to sit down and read the documentation on select, he discovered the problem and corrected it in a matter of minutes. We now use the phrase "select is broken" as a gentle reminder whenever one of us starts blaming the system for a fault that is likely to be our own.

Don't gloss over a routine or piece of code involved in the bug
because you "know" it works. Prove it. Prove it in this context, with this data, with these boundary conditions.

When you come across a surprise bug, beyond merely fixing it, you need to determine why this failure wasn't caught earlier. Consider whether you need to amend the unit or other tests so that they would have caught it.

There is a growing number of good text manipulation languages. Unix developers often like to use the power of their command shells, augmented with tools such as awk and sed. People who prefer a more structured tool like the object-oriented nature of Python. Some people use Tcl as their tool of choice. We happen to prefer Perl for hacking out short scripts. 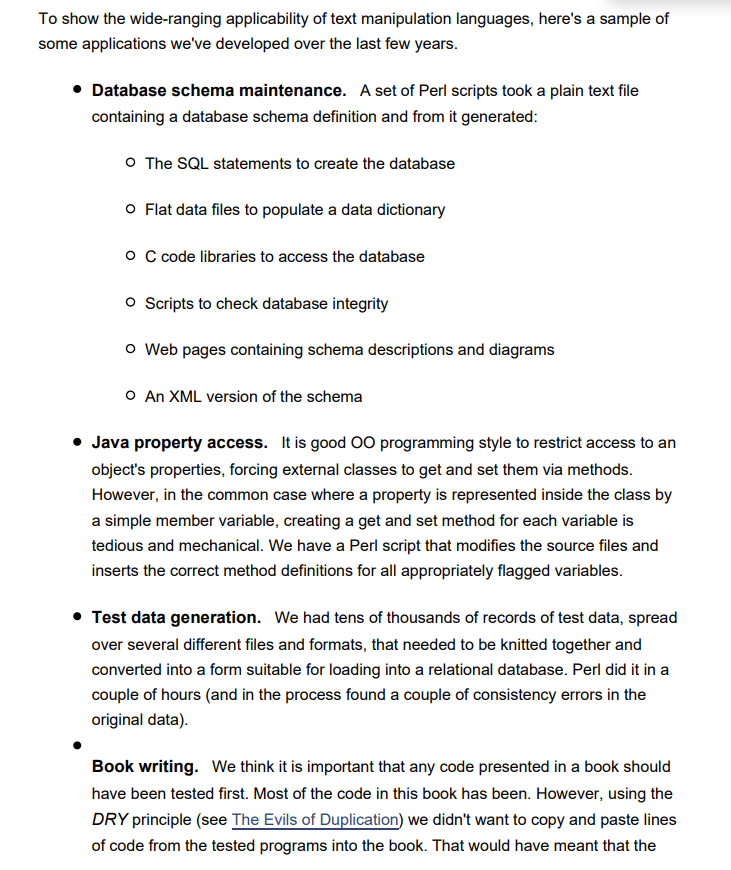 In the same way a woodworker invests the time in a jig, a programmer can build a code generator. Once built, it can be used throughout the life of the project at virtually no cost.

Once suspended, wassimbj will not be able to comment or publish posts until their suspension is removed.

Once unsuspended, wassimbj will be able to comment and publish posts again.

Once unpublished, all posts by wassimbj will become hidden and only accessible to themselves.

If wassimbj is not suspended, they can still re-publish their posts from their dashboard.

Once unpublished, this post will become invisible to the public and only accessible to Wassim Ben Jdida.

Thanks for keeping DEV Community 👩‍💻👨‍💻 safe. Here is what you can do to flag wassimbj:

Unflagging wassimbj will restore default visibility to their posts.