Blockchain basically is an innovation in information recording and distribution that avoids the sourcing of a third party to facilitate digital relationships. It is the result of proven technologies that are being applied in a fresh way. 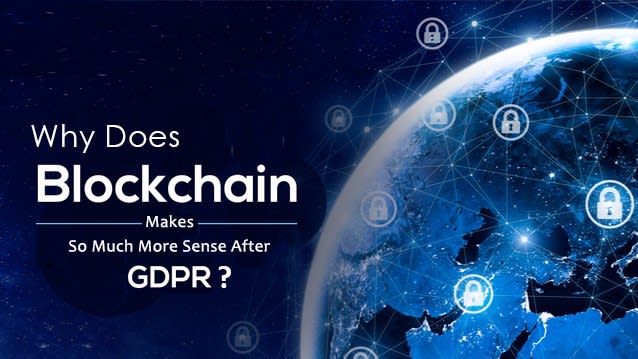 This technology was created by Satoshi Nakamoto who orchestrated three technologies together which are the Internet, private key cryptography and protocols that build incentives into an arrangement. This Blockchain Technology is frequently used about Bitcoin and other cryptocurrencies; in fact, without Blockchain Technology these digital currencies would never exist.

In the Digital world, Blockchain based platforms stores data in an anonymous fashion and provisions are there that allows data sets to be destroyed without even getting its details out in open. These data sets can well be destroyed in compliance with the GDPR requirement. This is the reason that Blockchain Technology is going to be frequently used with the implementation of GDPR.

GDPR is all about Data handling and in its presence the Blockchain technology makes a lot of sense.

Data Controller and Processors play a key role under GDPR and they work under the obligations as directed by the GDPR. According to the GDPR requirements whether the party is the controller or the processor, it remains significant to carefully assess the privacy roles of the parties involved in the blockchain network. However, this is a challenging task considering the involvement of multiple parties and processing categories.

The Blockchain can be categorised in two main classes: Private (this type of controlled by a limited group of people) and the other is public (this type does not come under anyone’s control).

The main objective of GDPR is to centralize the services that control the right to access the user’s data which is contrary to the Blockchain processes. It is important to note that not all technologies can be compatible with the GDPR unless they provide the right to exercise the Data; this is true in case of Blockchain technology in general which is not entirely obliged to adapt to the GDPR norms. It simply means that the data cannot be used for processing personal objective.

The Blockchain technology may be compared with the cloud computing systems where the operator of the cloud system is the Data processor himself and the users uploading the data to the cloud are Data processors themselves. However, it is not necessary that all the Blockchain systems will have a central operator or administrator. This implies that the system operated under blockchain technology may be operated by all its users in a peer-to-peer network and every participant in that blockchain system can act as Data controller himself and a Data processor for others.

The Blockchain technology involves more than one computer based on different locations. Hence it takes time to understand that which rule of jurisdiction it should be compiled with. Whereas the GDPR applies to Data controllers or Data processors at a broader territorial reach. The European Data protection rules are most likely to apply to most of the Blockchain based activities even if it has little or no connection to Europe.

This is Martin specialist at Wenso, provides a bespoke web development services across different technologies.

How To Write A Good Marketing Article

Trending on DEV
Can you become a web developer if you are 40?
#career #motivation
Senior front end dev here, ask me anything!
#webdev #discuss #ama
Workspace Wednesday: Show me pics of your at-home setup
#workstations #discuss
Developer Fears: Breaking Production
#fears #career #motivation #webdev
VSCode vs Vim
#productivity #vscode #vim #healthydebate
When starting a new project, when wouldn't you want to build in a cloud?
#discuss #watercooler #architecture #cloud
Day 0: Welcome To My Blog
#webdev #career #beginners #codenewbie
May 29th, 2020: What did you learn this week?
#weeklylearn #discuss #weeklyretro