It should be, but it turns out that undefined is a variable. So what happens if we set a value to it? The weird world of JavaScript…

TL;DR undefined is not a restricted keyword so we can name by mistake our variable undefined and set a value to it which will cause bugs during a runtime. Use linters to prevent it from happening.

There is a good reason for using void keyword instead of undefined in your if statements and this is because undefined variable actually might be defined. The reason behind it is not a restricted keyword. Undefined is a property of the global object, so it's a variable in a global scope. Go ahead and type window in your browser console - you will find "undefined" property inside the window object. So:

What's a void in JavaScript?

In simple words: void in JS is an operator used to return undefined value.

The above code shows that the void keyword is the best choice when it comes to checking variables for an undefined value.

Disclaimer: at the beginning of the article I wrote that undefined might be defined. That means in some cases "void 0 === undefined" might return false. We will go back to this issue shortly.

What will happen if I define "undefined"?

In modern browsers (including IE11) which support ECMA-262 5th version from 2009 also known as ES5, such a variable still will be undefined because it's read-only.

If you are used to using let like me, you will get something different:

We get the Identifier 'undefined' has been declared because it was defined - inside a window object. But shouldn't we get an error when we use var anyway? We should! That's why it's good to type at the beginning of each .js file:

Strict mode will prevent us from defining undefined:

I want to name my variable “undefined” anyway.

There is a trick. The above rule specified in 15.1.1.3 applies only to global objects. Local scopes are different: 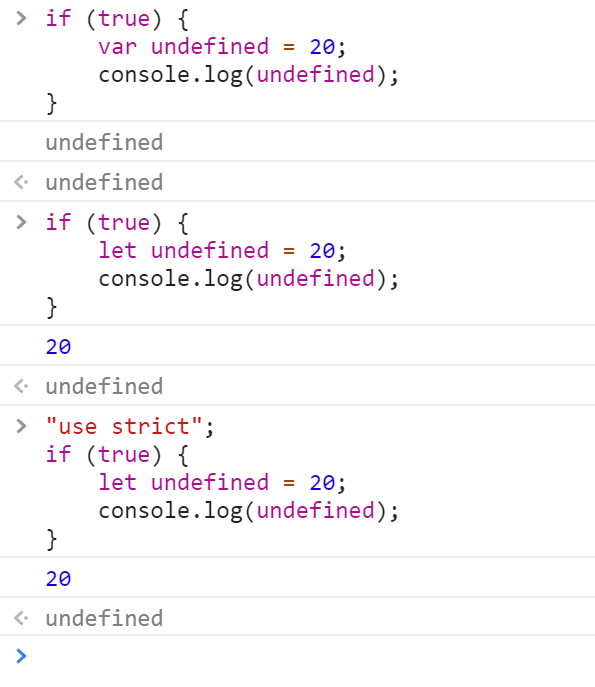 There is a reason to set a value to undefined. In a jQuery undefined is specified as a parameter to make sure it wasn’t defined before, for example in other included in project script:

undefined isn’t really being passed in so we can ensure the value of it is truly undefined. In ES5, undefined can no longer be modified.

Turns out we can set a value to undefined in node.js environment as well. But Node.js Supports ES5 so what‘s going on here?

The answer can be found in official Node.js docs:

And this is a huge problem. Now when you are writing your if statements like so:

… you can’t be sure if your variable will be undefined because somebody could have named by mistake, a variable “undefined” tens of lines earlier.

Then how to determine if the variable is undefined?

There are multiple ways to do that:

I don’t like this way because null is not null in JavaScript but is an object, and you have to remember to use ==, not === which nowadays is not recommended or typical.

Typeof always returns a string. Back in times when I was a beginner in JavaScript, making my first lines of code it wasn’t obvious for me why I should check for undefined with a string. For this reason, I don’t like doing so but it’s recommended in ESLint so this is an option as well.

Although it will work I wouldn’t recommend it, because variable something could be set to false which means it has a value and is not undefined anymore.

I think this is the best way. There is not much to remember because void 0 is always undefined. It looks unusual but it does its job and is easy to type.

Once suspended, wisniewski94 will not be able to comment or publish posts until their suspension is removed.

Once unsuspended, wisniewski94 will be able to comment and publish posts again.

Once unpublished, all posts by wisniewski94 will become hidden and only accessible to themselves.

If wisniewski94 is not suspended, they can still re-publish their posts from their dashboard.

Once unpublished, this post will become invisible to the public and only accessible to Wiktor Wiśniewski.

Thanks for keeping DEV Community 👩‍💻👨‍💻 safe. Here is what you can do to flag wisniewski94:

Unflagging wisniewski94 will restore default visibility to their posts.