Recently I was asked to refresh an old application that has the so-called spaghetti code. There are different levels of problems. Many can be solved just refactoring to use new JavaScript language features such as using modules. However, two problems are hard to solve without the help of a framework, which I call them:

In the post, I will show you how AppRun can help to solve the problems. Therefore we can avoid spaghetti code.

I cannot show the real production code I am dealing with, so I made an abstracted example to demonstrate the problems. As usual, I am using a counter example that has two buttons. One to increase the counter. The other one to decrease the counter. Also, I made it a litter complicated to show how many times each button is clicked. 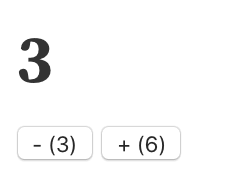 The code below uses jQuery. jQuery is a library that provides the convenience to access and manipulation of the DOM. It does not provide any architectural guidance. jQuery code is similar to the vanilla JavaScript code that can go wild.

You can see from the above code that event handlers plus and minus have the problem patterns. They update the state directly. They also render the DOM in different pieces.

But the real problem is that there isn't a way to break them further. The state has to be shared globally. And the rendering has to be different in each click event.

In much more complicated real applications, the logic could be long and tangled even more.

AppRun is the framework that can solve the two problems.

Sort of following the Hollywood Principle (Don't call us. We call you.) here, we provide code pieces to AppRun and wait for AppRun to call them.

We will be able to concentrate on the parts that are needed to update. We can spread out the rest of the state using the spread operator. Also, because there is no reference to a shared global object, it is very easy to unit test the state update logic.

Using AppRun, we have a counter application made from the state, _view, and update as shown below.

With the AppRun state management and DOM differential rendering in place, we no longer have the problem mixing state update with DOM rendering.

Usually, at this moment, I will show you the live demo on glitch. This time, I will show the interactive notebook I made on observable HQ. I feel I like the notebook more and more.

No matter how complex the application is, we will always have three parts, the state, view, and update. We no longer mix the state update with DOM rendering. Because the three parts are totally decoupled, our codebase is so much easier to understand, test, and maintain.