Chess is a great game. It’s even better if you’re good at it. Regrettably, I’ve never taken the time to learn chess strategy, so I decided to rely on the power of computation and game theory instead! As a fun side project, I have implemented a simple chess AI using JavaScript.

You can find the full source code for this tutorial in my GitHub repository.

The final product is playable at https://zeyu2001.github.io/chess-ai/. 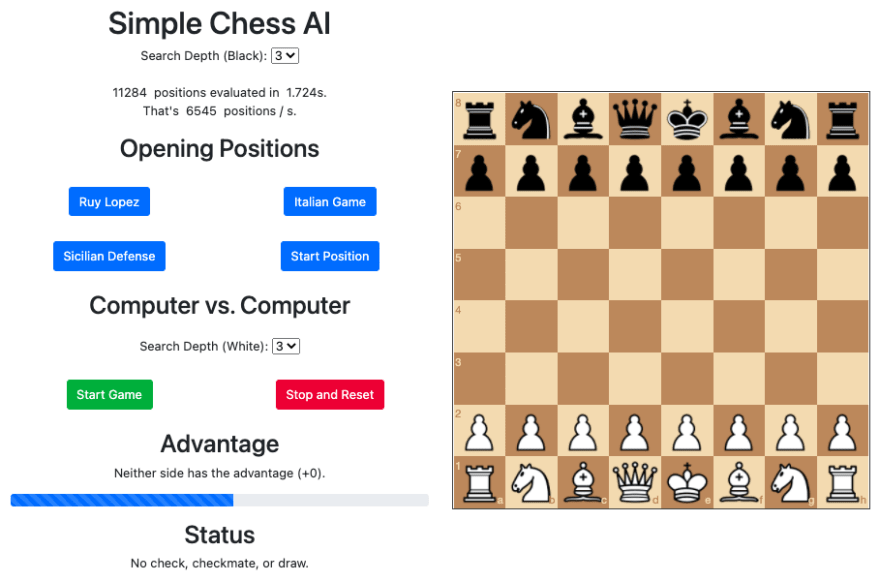 You should know basic programming and the general concept of a tree data structure. Everything else will be covered as part of this tutorial.

The two main algorithms involved are the minimax algorithm and alpha-beta pruning. These will be explained in-depth later on, and should be relatively simple to grasp if you have experience in programming.

Getting the GUI and game mechanics out of the way. This allows us to direct our focus towards only the most fascinating aspect of the application: the decision-making (AI) part! For this, we will be using external libraries:

With these libraries, you should be able to create a working chess game by following the examples (5000 through 5005 in particular) on the chessboard.js website.

Great! We have a functioning chessboard. But how do we implement an AI that plays (reasonably) good chess? Well, we’re going to need an evaluation function. Basically, we want to assign a ‘score’ to each chessboard instance (i.e. each set of positions of pieces on the board) so that our AI can make decisions on which positions are more favourable than other positions. 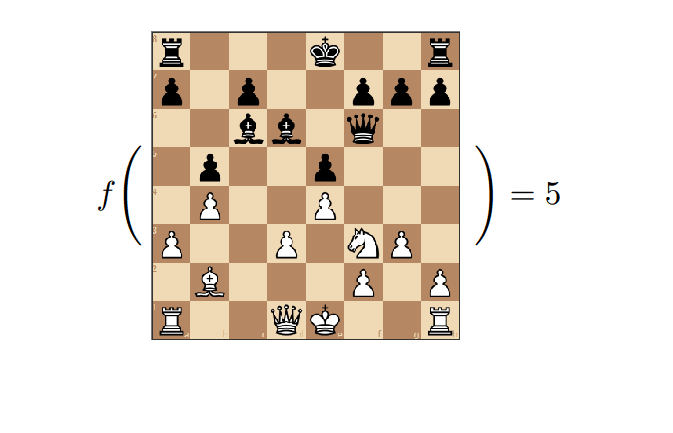 The AI will be able to compare between the two potential scenarios, and decide that Move A is the better move. Of course, this does not consider future ramifications — what if Move A gives our opponent the opportunity to attack? We will overcome this hurdle in the following sections by performing lookahead to anticipate subsequent moves.

The first aspect of our evaluation involves assigning weights to each piece type. If our AI plays from black’s perspective, any black pieces will add to our score, while any white pieces will subtract from our score, according to the following weights:

For instance, the PST for knights encourages moving to the center: 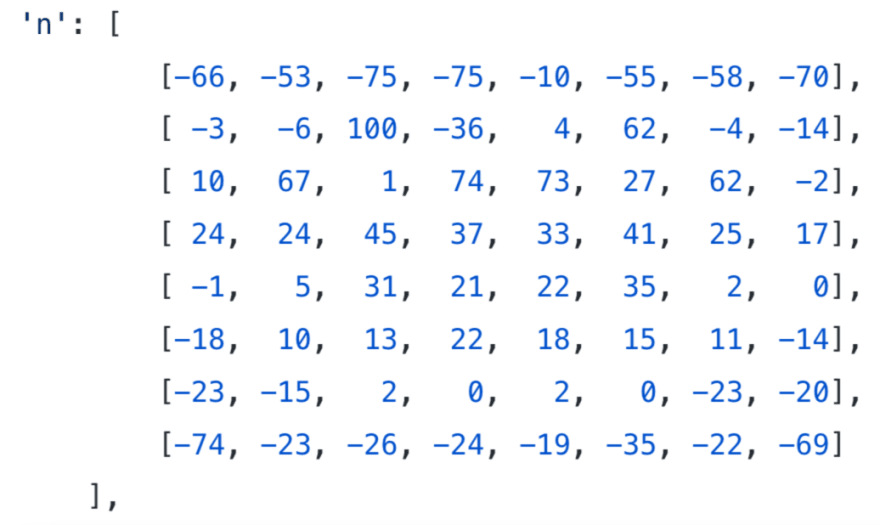 This is from white’s perspective, so it would have to be reflected for black.

I certainly am not a chess expert, so the piece weights and PST values are adapted from Sunfish.py. The following is my implementation of the evaluation function. Note that instead of iterating over 64 squares for each evaluation, we simply start from 0 and add or subtract from the score according to the latest move, keeping track of the previous score.

Now that we have an evaluation algorithm, we can start making intelligent decisions! We will use the minimax algorithm for this, and I highly recommend reading up on the Wikipedia article to better understand this decision strategy.

We can represent chessboard positions as nodes in a *game tree. *Each node is a chessboard instance, and has children corresponding to the possible moves that can be taken from the parent node.

At the leaf nodes, the evaluated score is backtracked. Positive and negative infinity are wins and losses respectively. At each recursive layer, the maximizing and minimizing roles are alternated. Layer 0 is the current game state, and the goal is to maximize our score.

The question our AI has to answer is: “Out of all the possible moves at Layer 0, which guarantees the maximum score?”

This is the same as asking, “Assuming my opponent is always making the most optimal decisions, which move leads to the possibility of attaining the best possible score?”

If we want our AI to be any decent at chess, we would have to perform a lookahead to anticipate our opponent’s subsequent moves. Of course, we can only anticipate a couple turns in advance — it’s not computationally feasible to look ahead as far as the final winning or losing states. We will have to introduce a depth limit that corresponds to the number of turns we are willing to look ahead, and use our evaluation function to determine the favorability of game states once we reach the depth limit.

This is a fun recursion problem, and I recommend trying to implement it yourself, although my implementation can be found below. If you're stuck, here’s the general idea:

Here’s my implementation. Note that I used a slightly modified version of chess.js, which allows me to use game.ugly_moves() and game.ugly_move() to generate and make moves without converting them to a human-readable format, improving the efficiency of the algorithm. The modified version can be found here, but using the normal game.moves() and game.move() will work just fine too.

Our AI should now be able to make reasonably good decisions. The higher the search depth, the better it will play. However, increasing the search depth drastically increases the execution time. Alpha-beta pruning helps to improve the algorithm’s efficiency by ‘pruning’ branches that we don’t need to evaluate. An additional reading resource can be found here.

The core idea of alpha-beta pruning is that we can stop evaluating a move when at least one possibility has been found that proves the move to be worse than a previously examined move.

Suppose that the game tree is as follows: 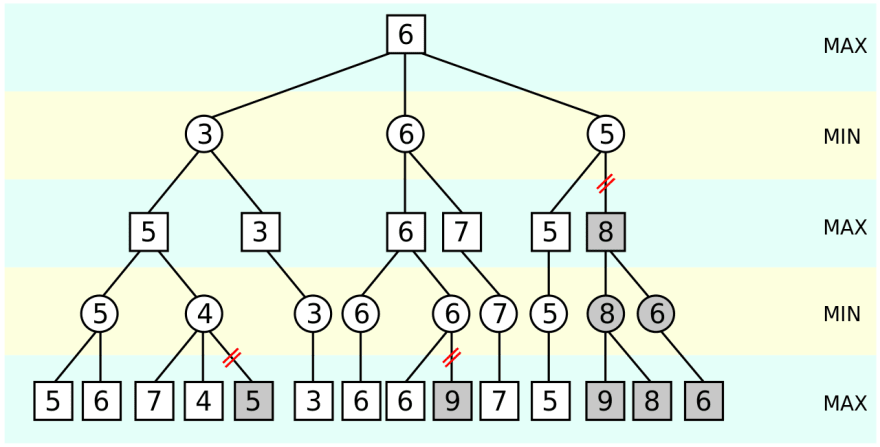 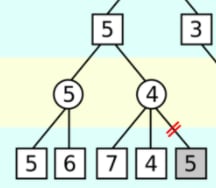 The maximizing player first considers the left child, and determines that it has a value of 5. Other paths will only be chosen if their value is x > 5.

In order for this path to be relevant, x > 5. But we know that x <= 4. This is a contradiction, so the maximizing player wouldn’t choose this path and there is no point evaluating this path further.

The same idea can then be extended to the rest of the game tree. We use two variables, alpha and beta, to keep track of the maximizing and minimizing values (5 and 4 in the previous example) respectively. This only requires minor modifications to the previous minimax function — see if you can implement it yourself!

That’s all! I hope you have enjoyed reading this article as much as I have enjoyed writing it. I’ve explained how I implemented my AI, and hopefully introduced several new and interesting concepts to you.

I’ve also implemented some other features, including pitting the AI against itself. You can play it at https://zeyu2001.github.io/chess-ai/, and refer to my GitHub repository for the implementation.

Once suspended, zeyu2001 will not be able to comment or publish posts until their suspension is removed.

Once unsuspended, zeyu2001 will be able to comment and publish posts again.

Once unpublished, all posts by zeyu2001 will become hidden and only accessible to themselves.

If zeyu2001 is not suspended, they can still re-publish their posts from their dashboard.

Once unpublished, this post will become invisible to the public and only accessible to Zhang Zeyu.

Thanks for keeping DEV Community 👩‍💻👨‍💻 safe. Here is what you can do to flag zeyu2001:

Unflagging zeyu2001 will restore default visibility to their posts.