Hello everyone and welcome to another edition of Front-End News, the only show on YouTube that brings you information on the latest events in the industry.

Here are the highlights of what I have prepared for you today:

Mozilla is back again in the limelight this week, this time with a pair of consecutive updates to their flagship product, Firefox. These fixes address a “zero-day exploit” and users are strongly encouraged to update their browser immediately to version 67.0.4 or newer. 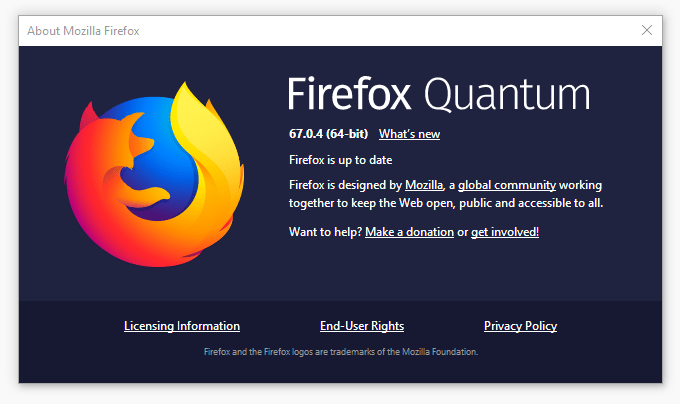 The credit for finding the first vulnerability is given to security researcher Samuel Groß, who is a member of both Google Project Zero and the Coinbase Security teams. The second issue, of lower severity, is credited to Coinbase Security. Now, in case you didn’t know, “zero day” means there are already attacks happening that target these vulnerabilities. The news portal ZDNet confirmed that the two exploits were used in a spear-phishing attack against Coinbase employees, as well as other, undisclosed, cryptocurrency organizations.

So what are you waiting for? While Firefox automatically checks for updates and installs them, you can force the process yourself by opening the menu, selecting Help then About Firefox. Once the upload is downloaded, restart the browser to install it. That’s all you need to do.

A new article came up this week on the Google Developers Web.dev blog, describing in great detail how Google Search experience was enhanced using service workers.

For those that don’t know, a service worker is a script that runs in the background, separate from the web page. Some of the most common uses are the push notifications or synchronizing data in the background. More details can be found via the Google Developers portal link below.

The article goes through the reasons behind the decision to use service workers, the most important challenges the team encountered and the solutions they found to reach the project goals. For all the “juicy” details, you have the entire article link down below.

CSS Day is one of the most prestigious conferences in the industry and the seventh edition took place last week in Amsterdam. It featured an amazing line-up of speakers and I simply couldn’t keep up with my Twitter feed as the presentations happened.

There is good news though for those unfortunate enough not to be able to attend (such as me). The recordings of all the presentations are up now on the official YouTube channel of the conference, free for everyone to see.

So fetch the popcorn, grab a notebook and say goodbye to your loved ones for the weekend, before you start the viewing marathon. See you at the other end.

Next item on the list is a project called “Every Layout”, created by Heydon Pickering (@heydonworks) and Andy Bell (@andybelldesign). They are taking a new approach in layout building, where the code takes advantage of the algorithms in the layout engine, instead of enforcing a “pixel-perfect” structure based on a static design mockup.

The entire system is built on top of a set of “rudiments”, rules and axioms that describe the elementary behavior of the building blocks. Next, there are 8 major layout primitives, covering some of the most common scenarios one can encounter.

The project is still under development, as only 3 layout primitives are ready at this moment. So keep an eye on the website for more updates, if this is interesting to you. I know I will.

Were you ever the victim of a cyber attack due to using software that was not up-to-date with the security patches? Let us all know in the comment section down below.

Caden lets you take control of your data