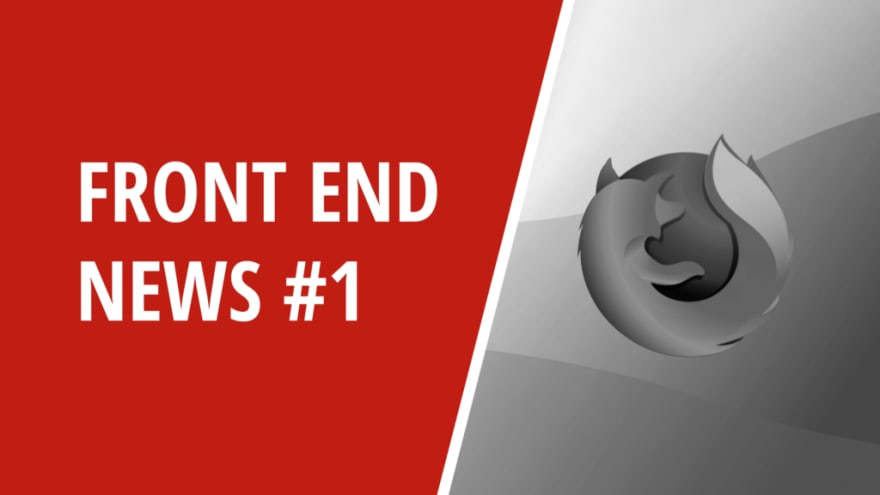 Hello everyone and welcome to the first episode of Front End News. I’m starting this series of articles (and videos) to aggregate the most important events that impact the front-end development industry over the previous week.

Today’s leading story is the follow-up on Mozilla add-on outage of May 3rd. We’ll continue with more details on the features built in the new Chromium-based Edge browser, we’ll see what are the JavaScript trends for 2019, there are news and updates from CodePen and we have a new handbook to read with the launch of the Web Project Guide book.

I’ve also made a video version of the content that you can view (and listen to):

On May the 3rd, all Firefox users around the world had the unpleasant surprise of finding that their add-ons stopped functioning and it was also impossible to install new add-ons. Mozilla released a quick-fix update on the same via the “Studies” system. This requires opting into the “Telemetry” feature, to the dissatisfaction of a large part of the user base. A permanent fix, not based on “Studies” was released on May 8th, with the 66.0.5 Firefox update for desktop and Android users and 60.6.3 for Firefox ESR (Extended Support Release, developed for large organizations like universities and businesses that need to set up and maintain Firefox on a large scale).

On May 9th, Mozilla issued a statement on the official blog, titled “What we do when things go wrong” where they apologized for the whole situation.

We strive to make Firefox a great experience. Last weekend we failed, and we’re sorry.

Mozilla CTO Eric Rescorla also made a blog post on the technical details of the outage and how the team provided the solution that fixed the entire issue. He also listed the lessons learned from the entire debacle and promised that a more detailed analysis will be released as soon as possible.

Microsoft released a 1-minute video on their Windows YouTube channel with a glimpse into the future of Microsoft Edge. The Verge picked up the ball and published an article explaining in detail what the major changes are.

The first feature is the IE mode built seamlessly into the browser. This is targeted mainly for businesses and large entities which have internal web apps built on top of Microsoft proprietary technologies. Businesses will also have the option to customize the New Tab page with the company logo, loading shortcuts to some sites into the top tabs as well as integration with Microsoft Search and Office 365.

The second major feature is allowing users to create Collections which they can share with friends or family or export into Word or Excel.

Last but not least, there will be a whole set of features and options related to privacy, which Microsoft hopes it will make Edge more attractive to users.

Speaking about Edge, Microsoft returns to the MacOS browser scene after a break of 15 years. VentureBeat signals that Edge is available for Mac users in two variants, a daily build and a weekly one. At this moment, neither Collections nor the privacy tools, are available, with an update expected later this year.

A glimpse at the JavaScript trends of 2019

CV Compiler published an article highlighting the existing JavaScript trends. They analyzed 300 job listings published in April this year where JavaScript is the main language required.

React sits comfortably at the top with 267 listings, followed by Angular (195) and Node.js (176). Developers are also asked to be familiar with Git , Continuous Integration or Test Driven Development.

The article also mentions skills not displayed in the chart, like Agile (150), UX (101) or Scalability (70). There are quotes from industry experts and the overall conclusion is that it has never been a better time to be a JavaScript developer.

CodePen refreshes their Job Board

CodePen announces an updated job board, both visually and under the hood. To celebrate this, they are running a promo the entire month of May. New jobs are $100 off and run for 60 days, double the normal time.

If you (or your company) have a web development job and want it promoted to a pool of top-notch developers from all over the world, that’s a great option right there. Don’t miss it.

2019 brought us already two great handbooks for front-end developers: The CSS Handbook by FreeCodeCamp and The Front-End Developer Handbook by Front End Masters. Today I present you now a new one — the Web Project Guide. This book is written by Deane Barker and Corey Vilhauer from Blend Interactive and it will be released as it is written. The first two chapters are already available and two new chapters will come live every month.

That’s it for today. I’m working on getting this a weekly occurrence and get a stable publishing schedule. Thanks for reading and I hope you’ll come back in the future.