Docker is a free and open framework for building, delivering, and running apps. Docker allows you to decouple your code from your hardware, allowing you to easily deliver apps. You will handle the infrastructure the same way you manage your apps with Docker. One of the characteristics you have with docker is that you can run multiple docker environments in the same host environment.
However, docker may be able to maintain only a certain number of containers, because it runs on a single node. But what if someone wants to work with or develop thousands of containers.

This is where Docker swarm comes into the picture. A docker swarm is the virtualization of the large number of nodes(running Docker engine) running in a cluster. These nodes can communicate with each other, helping developers to maintain multiple nodes in a single environment.

A swarm mode consists of Multiple Docker hosts which serve as managers (to handle membership and delegation) and workers which run swarm services. A Docker host may be a manager, a worker, or both at the same time. You determine the optimum state of service when you develop it (number of replicas, network and storage resources available to it, ports the service exposes to the outside world, and more). Docker strives to keep the optimal state. Docker schedules a worker node's activities on other nodes if that node becomes inaccessible. A job, as opposed to a standalone container, is a running container that is part of a swarm service and operated by a swarm manager. 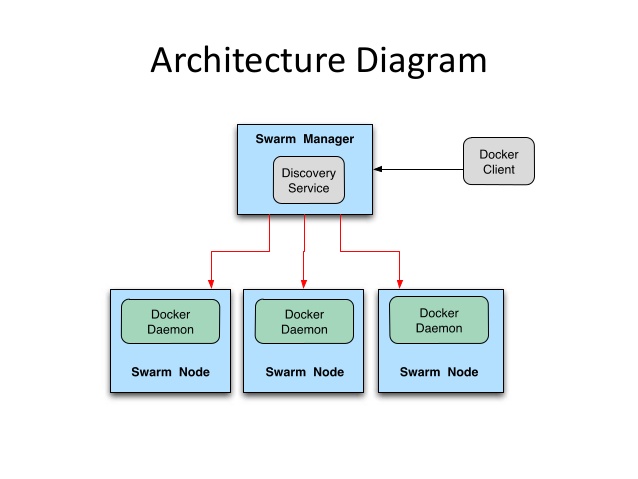 Previously, we have used terms such as manager, worker, nodes, etc, Now let us try to understand what it means and how the docker swarm works.

A node is a Docker engine instance that is part of the swarm. This can also be thought of as a Docker server. One or more nodes may operate on a single physical device or cloud server. But in development, these swarm cluster nodes can be spread over several machines on the cloud.
There are two types of nodes, a manager node, and a worker node.

The tasks to be executed on the manager or worker nodes are described by a service. It is the swarm system's core mechanism and the main point of user engagement with the swarm.
When you create a service, you also create containers and also specify tasks, which must be executed inside them.
The swarm manager distributes a certain number of replica tasks among the nodes in the replicated resources model depending on the scale you set in the desired state.

External modules, such as cloud load balancers, can access the service through the PublishedPort of any node in the cluster. regardless of whether that node is actually performing the service's task. Ingress links are routed to a running task instance by all nodes in the swarm.

After looking at what the docker swarm is and its related terminology, let us see what are the different features that swarm mode offers on the docker engine

Now, let us get into some practical, we are going to create a cluster, add two worker nodes and then deploy services to that swarm.
Pre-requisites:

This tutorial includes three Linux hosts with Docker-enabled and network-compatible communications. They can be physical, virtual, or Amazon EC2 instances or otherwise hosted.
One will be a manager and the other two will be workers.
We are going to use three Linux machines hosted on AWS, that is EC2 instances.

While creating EC2 instances add the following rules in the security group as follows:
The following ports must be available. On some systems, these ports are open by default. 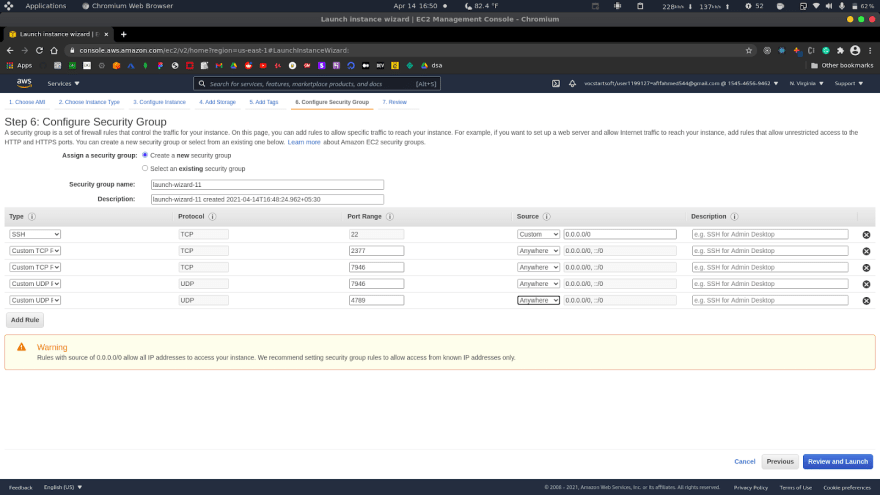 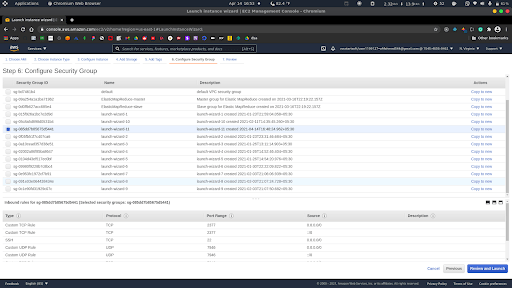 Repeat this for all the three machines.

You are able to create a swarm after you have completed all the setup steps. Ensure that the host machines are running the Docker Engine daemon. Open a terminal and ssh on the computer where the manager node must be executed.

Run the following command to create a new swarm:

The --advertise-addr flag configures the manager node as 172.31.80.181 to publish its address. The other swarm nodes must have access to the IP address of the manager.
The output consists of commands to attach new nodes to the swarm. Nodes will enter as managers or workers according to the flag value.

To see the current state you can use docker info: 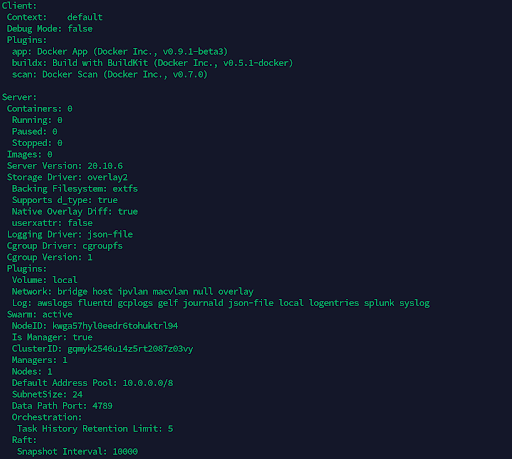 In this above image, we can see that there are no containers running on the docker server and the swarm flag is active. This also prints out the clusterId and number of managers and nodes etc.

To view information about nodes use the command

The * next to the ID represents that this is the node we are currently connected to.
The swarm mode Docker Engine names the machine hostname node automatically.

It's time to add worker nodes to the above-created swarm cluster.
ssh into the machine where you want to run your worker.
Now, we must run the output of docker swarm init as a command in this worker terminal:

You can execute the following command on a manager node to retrieve a worker's join command if your command is not available:

Do the same with the other worker as well. SSH into another machine and run the join command.

To view worker nodes, open a terminal and ssh in the machine that runs the manager node and execute the Docker node ls command:

The manager nodes in the swarm are determined by the column MANAGER. Worker1 and worker2 are identified as working nodes by the empty state in this column.

Deploy service to the swarm

Now we have a cluster with a manager and two workers. We can now deploy services to the swarm cluster.

Open the terminal into the manager node after SSH, and run the following command:

Let's break down the above command:

To see the list of running services run the below command:

This image lists the name of the service we just create and the number of replicas, along with the base image, which is alpine.

In this article, We started with a description of the docker, then we discussed the need for multiple docker hosts. We then described what is docker swarm, its uses, and its working through docker swarm architecture, we also covered, different docker swarm terminologies like manager node and worker node. After we thoroughly understood the docker swarm we stated to implement it or run services in a swarm cluster. We started with creating 3 Linux hosts in AWS as EC2 instances along with the security group configuration(by adding TCP and UDP rules).
We looked at how to create or initialize a swarm cluster through a manager node, then we added a couple of worker nodes to the same cluster. TO conclude we added a service running Linux alpine to run a ping command.
Also this is my first article on dev.to, and really enjoyed writing it.

Is kind of like CoffeeScript it is "dead" still has 1.3 million downloads per week.
Swarm is also way easier to setup and manage than k8, at my company we use swarm.

mohammed afif ahmed
I am a computer science student and a Full stack developer, also an open source enthusiast.
Everything you need to know about linux File System directories!
#linux #tutorial #os #windows

Once suspended, afif_ahmed will not be able to comment or publish posts until their suspension is removed.

Once unsuspended, afif_ahmed will be able to comment and publish posts again.

Once unpublished, all posts by afif_ahmed will become hidden and only accessible to themselves.

If afif_ahmed is not suspended, they can still re-publish their posts from their dashboard.

Once unpublished, this post will become invisible to the public and only accessible to mohammed afif ahmed.

Thanks for keeping DEV Community safe. Here is what you can do to flag afif_ahmed:

Unflagging afif_ahmed will restore default visibility to their posts.