Mandarine is an open-source typescript framework that runs on Deno. Mandarine is used to develop any type of server-side application (Mostly MVC) with the use of strong design patterns such as Dependency Injection, or the SOLID principles.

On this post, we will cover why Mandarine is perhaps, the best server-side framework in the Deno community. I admit, it's a hot take to describe Mandarine as such, but I will defend these points throughout the post.

We have to start from this point. NodeJS as you may already know is meant to work with Javascript and yes, you can make it compatible with Typescript as well, but NodeJS itself was not created under a Typescript paradigm. Unlike Deno, Deno was fully created to support typescript out of the box, most Deno applications are written in Typescript and this will continue to be this way. As Ryan Dahl (Creator of both NodeJS & Deno) stated:

The reason I address this is because I keep seeing packages in Deno that are written in Typescript but they have the same kind of code a Javascript code could have & this is really an issue because people are just trying to think in a "Javascript way" inside a Typescript environment which definitely stops the development of more powerful features & stops the limits of our imagination in a Typescript environment. I keep seeing people coding the "equivalent" of a NodeJS package in Deno and while this may be good at some extend, I can't stand the fact that the "Javascript way" is being kept in many Deno packages.

Mandarine changes this. Mandarine takes advantage of every single feature Typescript has to offer, from generic classes inside Mandarine's core, to the use of Decorators & Metadata reflection for the creation of Mandarine-powered applications.
Mandarine tries to get as far away as possible from a Javascript thinking in a Typescript runtime. Typescript really are not just Types, Typescript has an extensive core of solutions for design-patterns and functionalities that many developers are not taking advantage of which is something Mandarine is looking forward to changing.

(A simple quickstart in Mandarine)

Mandarine believes in the strong use of Design Patterns as well as the benefits of Object-Oriented programming. Mandarine makes use of two important design patterns: Dependency Injection & MVC in order to provide the most SOLID development.

Mandarine is well-known because of its dependency injection system. Among only 3 frameworks that support Dependency Injection in Deno, Mandarine has perhaps the most stable approach. It allows dependency injection by both construction-based & property-based with the benefit of property-based injection not having to specify what type we are trying to inject like in Angular or NestJS where property injection needs to receive a token (type). Also, another +1 for Mandarine's dependency injection system is the fact there is no such thing as a "Module": If you come from Angular or NestJS for back-end, you will know dependencies usually go under the concept of "Module" and through Modules is the way your application communicates with other components. In Mandarine such concept does not exist since everything in Mandarine is either a Mandarine-powered component or not and so by the time you use the dependency declarator-decorators such as @Controller, @Service, @Component, @Configuration or others that component is immediately available for injection at other Mandarine-powered components. If you come from a Java environment, you probably know about Spring Boot, most likely, you have used. Mandarine uses the same concept of dependency injection that Spring Boot has.

Mandarine has a set of built-in tools that allow back-end development to be easier, not only in terms of design patterns as we mentioned before, but in terms of common features that are highly used.

Mandarine's built-in ORM is perhaps my favorite feature. It allows you to write SQL queries in the same way you would in frameworks like Spring Boot. With the concept of MQL, much of the functional (or SQL) boilerplate code is taken away.

Here is a clear implementation of how this works: 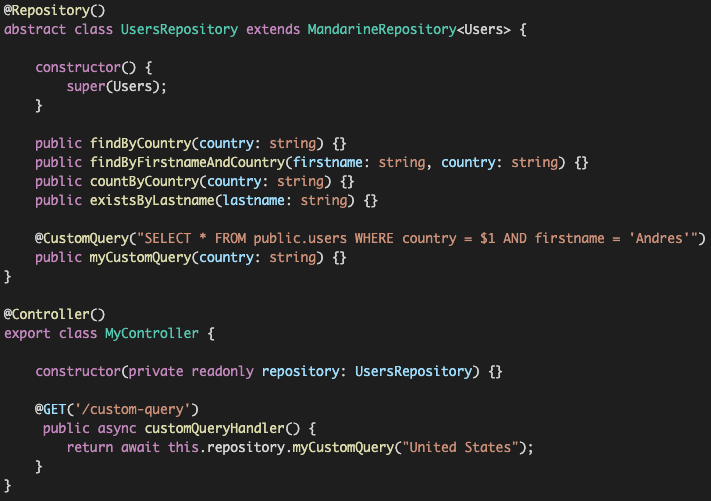 Mandarine brings the concept of Native Components to Typescript. Native components are classes that Mandarine uses as default to boost the framework. These classes usually have some sort of information related to the different behaviors of the framework. For example, in Mandarine, there is the native component WebMvcConfigurer which has the behavior of how the session container (for the session middleware) will behave, it also has information about the default resource handlers (used for serving static content). With the concept of Native Components, Mandarine allows the developer to override (through @Override) and establish custom behaviors in a OOP way, making it not only straightforward but readable in terms of lines of code to execute such thing.

Many of you may know the express syntax, which is something like

This syntax is widely used in the NodeJS community as well as the Deno community. In Deno, we have several frameworks that take use this approach such as Oak or Pogo. While this approach may be found straightforward, it really sticks to the way we write javascript & as I mentioned before, I believe a Typescript ecosystem should make use of all its Typescript features, otherwise, what's the point behind using typescript really?. Mandarine takes a different view and creates your routes through the use of decorators such as @GET, @POST and so on, similar to NestJS or Spring Boot.

Just to make the last remark about why Mandarine is perhaps the best server-side framework by far in Deno, Mandarine has announced the list of features that will be available in version 2.0.0 (expected to land during last week of August 2020, or first two weeks of September 2020). These features include:

We have deeply analyzed some of the most important features that divide Mandarine from the rest of server-side frameworks in Deno. The opinions behind whether Mandarine is really the best server-side framework in Deno will be different for every person, although we can state the fact that Mandarine accomplishes a better interaction between a modular application through enforcing principles such as SOLID or MVC. On the other hand, a opinion-driven thought is whether enforcing OOP programming and making use of all typescript features is really a good thing. Some would argue that Javascript is the way it is and it should be written that way, my take really goes to: If Javascript is what it is, why did we even invent Typescript?, and what I'm saying with this is that in a Typescript environment, you should think in a Typescript way: interpreting Typescript as only types is fundamentally wrong.

This post is not meant to cause any controversy on the different contributions people have made to Deno rather than presenting both facts & views to how Mandarine can get to solve different issues in a enterprise-like way, not only technically speaking but also theoretically speaking.

The different comparisons made to different frameworks such as Angular, NestJS, Pogo or Oak do not refer to facts rather than opinions on what a better approach looks like. While it is true that these frameworks do things the way they do it for a specific reason which has been thought by knowledgeable developers, it is also true that every approach can have a better approach which is exactly what I am dressing in the different comparisons and their final objective.

It is clear that every developer has a preference towards a coding style, some will prefer decorators, others would prefer functional-like declaration. Every opinion on the matter is of course appreciated by this post.

How I built a Bitcoin indexer using ZeroMQ

Once suspended, andreespirela will not be able to comment or publish posts until their suspension is removed.

Once unsuspended, andreespirela will be able to comment and publish posts again.

Once unpublished, all posts by andreespirela will become hidden and only accessible to themselves.

If andreespirela is not suspended, they can still re-publish their posts from their dashboard.

Once unpublished, this post will become invisible to the public and only accessible to andreespirela.

Thanks for keeping DEV Community 👩‍💻👨‍💻 safe. Here is what you can do to flag andreespirela:

Unflagging andreespirela will restore default visibility to their posts.