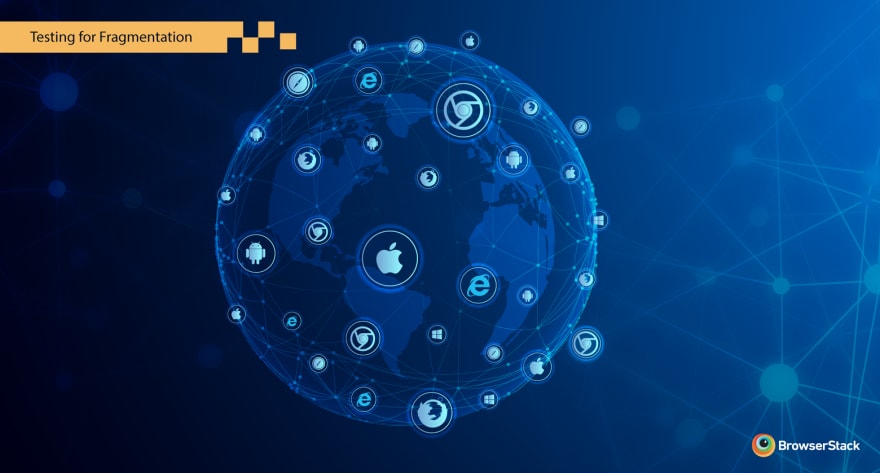 “Testing for Fragmentation” is a blog series. It takes a look at the market data on devices, platforms, browsers, etc. in use today, how this diversity comes into play during software development and testing—and what 2 million+ developers on BrowserStack do to account for it.

In this post, we look at how Fragmentation varies across the globe and key statistics you should keep in mind if you have a presence in these markets.

The growth mantra of online businesses is scale—reach more users, fast. However, as you scale across countries, it’s important to ensure that your app/website is compatible with your users’ devices and browsers.

Compatibility is to online businesses what distribution is to brick and mortar ones. You might have the best product in the world, but it counts for nothing if your customers don’t have the experience you designed for them.

For instance, being compatible with the top 20 devices will help you cover 70% of the US audience. In India, not only will the devices be different, the coverage provided will be less than 35%. Similarly, if your mobile website doesn’t load properly in Opera browser, you would have ignored almost half of the Nigerian market!

Clearly, what works in one market won’t necessarily work for another. So, in this blog post, we will outline country-specific fragmentation nuances that you need to consider if you have a presence in these markets. Or plan to, in the future. We have tried to cover at least one country in each continent.

After reading this piece, you should know: 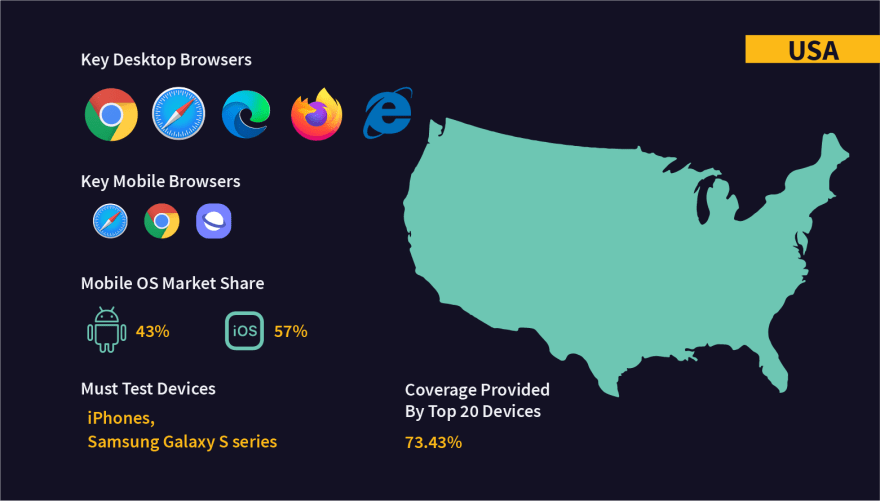 A strong market share of Apple devices in the US makes testing on iPhones and iPads (both new and old) a no-brainer. It’s a common myth that iPhones are not affected by fragmentation. However, if you do a risk-based analysis, testing on older iPhones is critical. They have significant traffic (over 40% of iOS traffic) and the probability of UI breaks is higher.

Another set of devices to consider is tablets. The market share of tablets, in terms of traffic, is over 5%. Testing on the most popular Apple and Samsung tablets should be enough to cover a decent majority.

Things get more interesting when we come to desktops. For accessing the internet, the usage of desktops in the US is still more than mobile. The problem it creates is that the browser market is more fragmented.

You can safely release your websites only if you have tested them extensively across Edge, Firefox, and IE apart from the usual Chrome and Safari. This is mainly because each one of them has over 5% traffic coming through them. 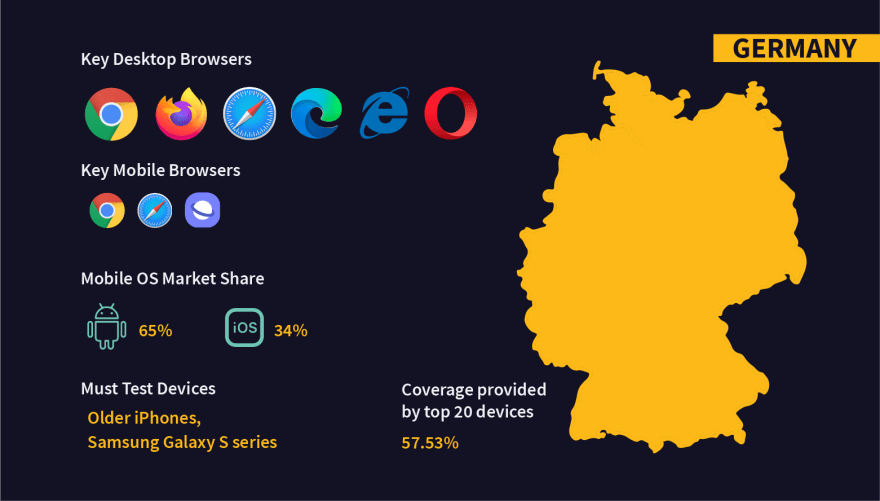 The usage pattern of devices and browsers doesn’t vary much across western Europe. While device fragmentation isn’t as high as Asia, a stronger market presence of Android devices makes things difficult for testers. The three leaders in Android—Samsung, Huawei, and One Plus—run their own custom OSes, thereby increasing the combinations to test on.

For desktop browsers, testing on Chrome, Firefox and Safari is a must. However, IE and Edge have over 5% traffic each and testing on these two browsers can optimize the experience for a lot of your users.

Tablets, too, perform well in Germany and contribute to around 4% of the traffic. Most of this is from Apple and Samsung tablets, so adding them to your test suite will improve coverage. 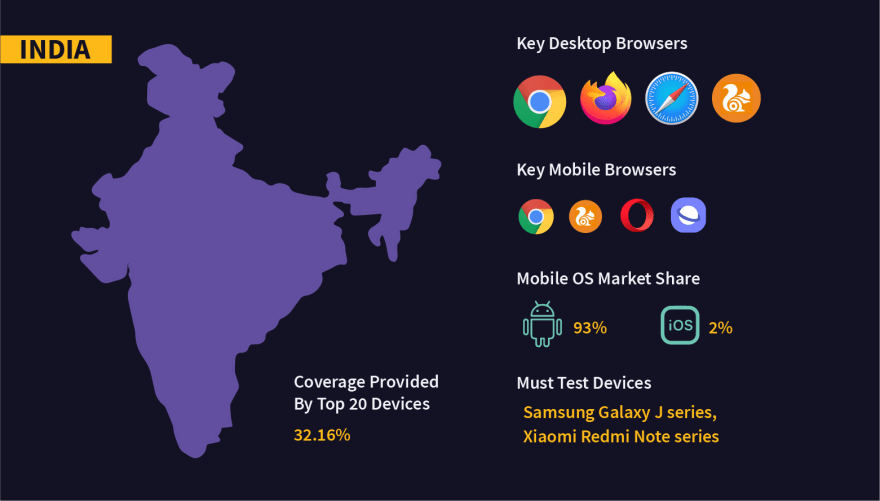 Very few markets are as dynamic and as complex as India; as expected, fragmentation here is colossal. While the new devices and browsers are allowing millions of people to access the internet, testing across these devices becomes a nightmare. The Indian market is so fragmented that testing on the top 20 devices accounts for less than one-third of the user base.

Besides new and upcoming brands and models, there are established names like Samsung J series, Xiaomi Redmi series, as well as the multitude of Oppo and Vivo devices to test on. Android has a staggering 93% market share in India, and a new OS for affordable phones, KaiOS, beats iOS in terms of the traffic.

The same holds true for browsers. If your traffic comes from India, UC Browser and Opera must feature in your test suite. They account for over one-fourth of the traffic in mobile browsers.

A lot of first-time internet users in India leapfrogged desktops and are using mobile phones directly. Given this, and the fact that over 75% of traffic comes from phones in India, testing on mobile browsers is as important as desktop browsers. 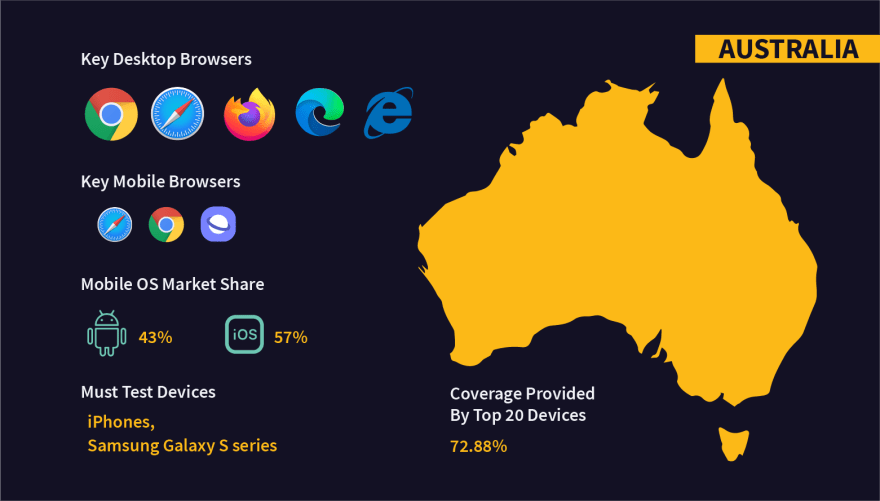 The fragmentation landscape in Australia is very similar to that in the US. A large bulk of the traffic comes from Apple and Samsung Galaxy devices, with Apple having around 57% market share.

In terms of browsers, the must-test browsers are Chrome, Safari, Firefox, IE and Edge, each bringing more than 5% of the total traffic.

The Australian market has over 8% traffic from tablets, one of the highest in the world. If you have traffic from this region, testing on tablets is strongly recommended. 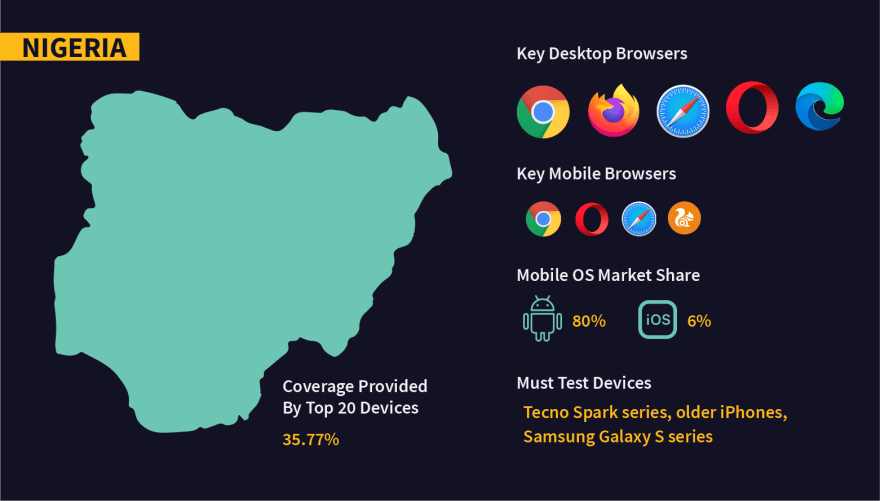 Much like Asia, the African continent is also a highly fragmented market. Mobile forms more than 70% share of the traffic and Android devices own 76% of the market. Interestingly, Windows phones have a larger market share in Nigeria than any other country. However, in the larger picture, it is only about 1% of the traffic.

Here, too, testing on the top 20 devices will give you less than 40% coverage. In addition, you will have to test on unique phones such as the Tecno Spark and Infinix Hot series of devices.

The most interesting behavior is exhibited in terms of mobile browsers. In Nigeria, Opera leads the market, surpassing even Chrome and Safari. This is primarily because Opera helps users in saving data costs. Chrome is catching up fast, but Opera still leads the market. 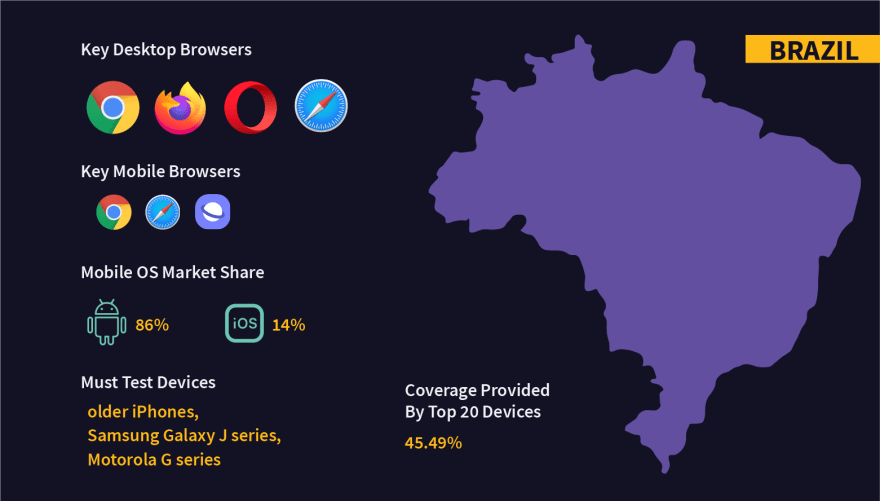 The extent of fragmentation in the Brazilian market is high, thanks to a higher market share of Android devices (around 75%). Here, too, the devices you need to test on are different from the other parts of the world.

Interestingly, over 70% of internet traffic in Brazil comes from desktops. While this is declining, it will be a while before the scales tip. Testing for desktop browsers thoroughly is a must for this market. Even though Chrome owns more than 80% of this space, testing on Firefox, IE, Opera, and Safari shouldn’t be missed. 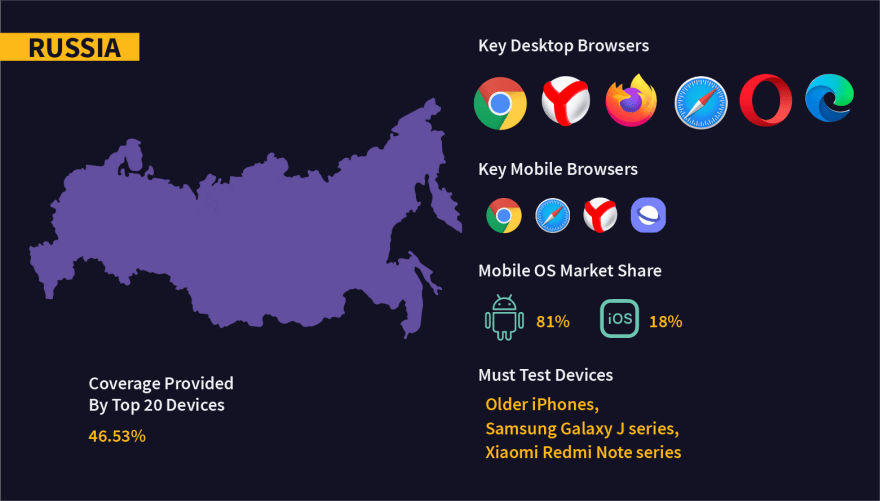 Russia is also a highly fragmented market with the top 20 devices giving just over 45% coverage. The key devices you need to test on are older iPhones, Samsung J and A series, and Xiaomi Redmi series devices.

In terms of browsers, Yandex is the 2nd most popular browser in Russia and testing on it is a must if you have Russian customers. Opera also garners over 5% of Russian traffic and should ideally be a part of the test suite.

Every country has its own set of differences in terms of the devices or browsers that people use to access the internet. The best way to prepare is to be cognizant of the differences that exist and account for them while building your test suite.

These differences might seem daunting at first, but looking at them together for your entire traffic will make decisions much easier. You can never test on all devices, but by knowing the key trends across the globe, you can minimize a huge portion of risk by testing for those variables.

Gradle all the way down: Testing your Gradle plugin with Gradle TestKit