This article is taken from my course, Step Up Your JS: A Comprehensive Guide to Intermediate JavaScript.

In this article, we’ll cover a lot of seemingly unrelated topics and tie them together at the end. There’s also a TL;DR at the end for those who want the short version.

JavaScript gives us access to three global functions: Object, Array, and Function. Yes, these are all functions.

All JavaScript objects have a prototype. Browsers implement prototypes through the __proto__ property and this is how we’ll refer to it. This is often called the dunder proto, short for double underscore prototype. Don’t EVER reassign this property or use it directly. The MDN page for __proto__ warns us in big red blocks to never do this.

If we were to log the prototype of an object in Chrome, this is what we’d see.

There are a couple of important points:

To understand object prototypes, we need to discuss object lookup behavior. When we look for a property of an object, the JavaScript engine will first check the object itself for the existence of the property. If not found, it’ll go to the object’s prototype and check that object. If found, it’ll use that property.

If not found, it’ll go to the prototype’s prototype, and on and on until it finds an object with a __proto__ property equal to null. So if we were to attempt to look up the property someProperty on our obj object from above, the engine would first check the object itself.

This is called the prototype chain. It’s normally described as a chain going downwards, with null at the very top and the object we’re using at the bottom.

When performing a lookup, the engine will traverse up the chain looking for the property and return the first one it finds, or undefinedif it’s not present in the prototype chain.

This can be demonstrated. Here we’re going to work with __proto__ directly for the purpose of demonstration. Again, don’t ever do it.

This prototype chain is depicted below.

When we log obj, we get an empty object because the property testValue isn’t present directly on the object. However, logging obj.testValue triggers a lookup. The engine goes up the prototype chain and finds testValue present on the object’s prototype and we see that value printing out.

There’s a method available on objects called hasOwnProperty. It’ll return true or false based on whether the object itself contains the property being tested. Testing for __proto__, however, will ALWAYS return false.

When we call a function with new, it sets the returned object’s __proto__ property equal to the function’s prototype property. This is the key to inheritance.

This lets us assemble the following prototype chain.

You might be wondering what the point of this is. We can just attach this method inside the constructing function itself, like this.

You’re right, this works. The difference is that this way, each object created by calling new Fn() will have its own version of print placed directly on the object. They’ll be distinct functions in memory. The problem with this is performance and memory usage.

There may be times when you need thousands of new objects created from a constructor function. Using this second way of attaching print, we now have thousands of copies of print, each one attached to one of the objects.

Using the prototype chain, no matter how many objects we create out of Fn, we have one print sitting on Fn.prototype.

One method is not a big deal. Large programs, however, often have tens of methods that objects need. If an object needs access to 20 methods and we create 100,000 objects, the JavaScript engine has created 2,000,000 new functions.

If this needs to happen multiple times, this will cause noticeable speed and memory issues. Compare this to having a total of 20 functions and giving each object the ability to use the same functions through the prototype chain. Much more scalable.

Using console.time and console.timeEnd, we can directly show the difference in how long it takes. Here’s the time difference of creating 2 million objects with functions directly on them vs. on the prototype. We’re storing all the objects in an array. 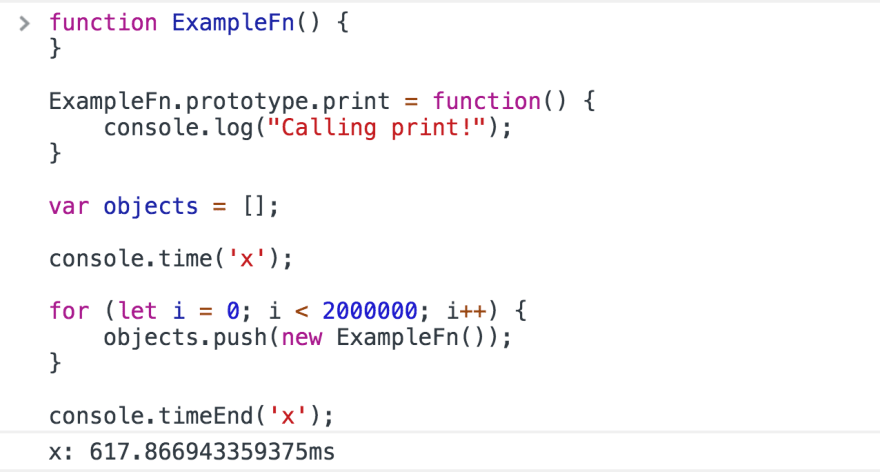 As we can see, putting the print method on the prototype takes about half the time.

As mentioned, an object’s __proto__ is equal to the prototype of the function that created the object. This rule applies to literals also. Remember that object literals come from Object, arrays come from Array, and functions come from Function.

The end of the __proto__ chain of both Array and Function is equal to Object.prototype. They all derive from the same thing. This is why arrays, functions, and objects are all considered first-class objects in JavaScript.

We’ve thrown the word constructor around a few times. Let’s explain what it is. Every function’s prototype has a constructor property on it that points back to the function itself. This is something the engine does for every function.

An object created by running new Fn() will have its __proto__ equal to Fn.prototype. So if we were to attempt to log the constructor property of that object, the engine would give us Fn through its lookup process.

There’s a way to set the prototype of an object manually. Object.create. This function will take in an object as a parameter. It’ll return a brand new object whose __proto__ property is equal to the object that was passed in.

This gives us an easy way to extend the prototype chain. We can make objects inherit from any object we like, not just a function’s prototype.

If you’d like more information and examples, the MDN page for Object.create is a great resource.

That was a lot. I know. However, you now have a deep understanding of inheritance in JavaScript.

In short, inheritance in JavaScript is implemented through the prototype chain. Every normally created object, array, and function has a prototype chain of __proto__ properties ending with Object.prototype at the top. This is why they’re all considered first-class objects in JavaScript.

We can check if an object has its own property by using the hasOwnProperty method. We can manually set up inheritance by using Object.create.

That’s It. If this was helpful, please hit the heart so this story reaches more people. Also feel free to check out my other work.