In this post, we are going to be talking about the linked list data structure in the language of "thank u, next" by Ariana Grande. If you haven't watched the piece of art that is the music video for the song, please pause and do so before we begin.

A couple quick definitions so we make sure we're on the same page:

In the above diagram, we see five different nodes, and each has a data value. The first four are in the order which she lists her exes:

Thought I'd end up with Sean
But he wasn't a match
Wrote some songs about Ricky
Now I listen and laugh
Even almost got married
And for Pete, I'm so thankful
Wish I could say, "Thank you" to Malcolm
'Cause he was an angel

The last one is Ari herself:

Plus, I met someone else
We havin' better discussions
I know they say I move on too fast
But this one gon' last
'Cause her name is Ari
And I'm so good with that (so good with that)

We can create a super simple linked list by creating nodes and linking nodes in the following way:

The final code for this post is also in Python here

If we print out what the Sean node looks like, we can see that it stores his name as the data attribute as well as a reference to the next node, which is Ricky. We can traverse all the nodes by using the next attribute! 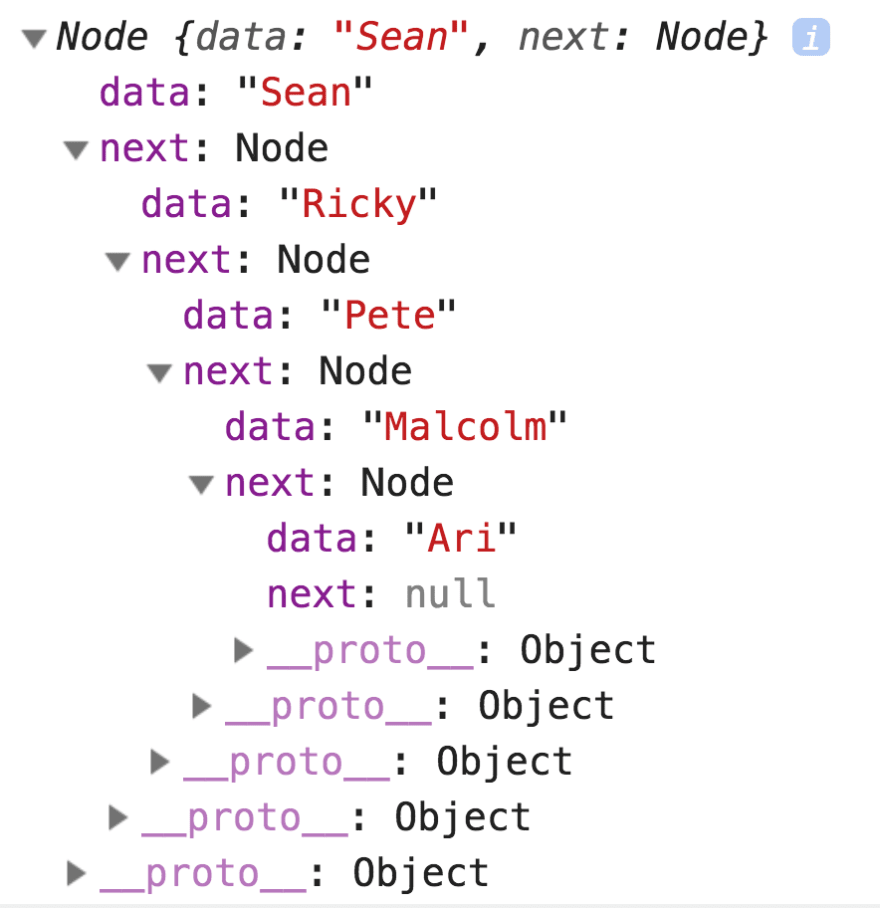 Also, at the end of the linked list, there is a null pointer. In this case, since Ari is the queen, she's good by herself and doesn't need to move on to her next significant other. So, no thank u, next for her node.

Linked lists have some benefits compared to arrays, which are their main alternative in the world of linear data structures. Arrays are traditionally stored in a contiguous block in memory, which allows us to use the speedy indexing formula start_of_array_in_memory + space_allocated_for_each_array_item * index_of_item_we_want. While it's super efficient (O(1)) to get an item at an index, it's less efficient to insert or delete items from the array -- we would need to move everything to a different block in memory. It's not guaranteed that there's space before or after that array to insert the new item. If you insert or delete in the middle, the same logic applies -- you would have to move the items around in memory to fill holes or allocate more space.

Unlike arrays, linked lists do not need to be stored in one contiguous (or side to side 😉) block in memory which makes insertion and deletion at the beginning of the linked list easier. The pointers can point to any location in memory, so you don't have to move all the data around to add a new node.

The other drawback with linked lists is that they use up a little more memory than arrays since they store the data and the pointer to the next node whereas arrays just store the data.

Let's look at the code we would use to implement some of these operations. We'll insert at the beginning of the linked list, and implement remove at index to show what needs to take place to do that:

Here's a visualization of what it would look like to remove Ricky from our linked list in case Ari became less effing grateful for him:

Everything in red gets deleted.

Two other helpful methods are search and iterate:

So, we know that storing Ariana Grande's exes in a linked list is a great use of the data structure since we are always listing them in the same order when we sing along to "thank u, next", But what other data works well in a linked list? One use is a task queue. Printers, for example, can only print one thing out at a time, but we still want to load up future tasks and not have to press print for each page! When we create a list of tasks, we will always add the newest item to the end of the queue and then print out the one that's first in line! A back button implementation is similar! Or an undo hotkey! We will usually implement a stack or queue data structure on top of a linked list to implement these. I've also found them really helpful for a lot of code challenges.

Hopefully, this post taught you love instead of patience or pain.

How to do Ping-Pong pair programming in a remote environment