JavaScript is undoubtedly a must have if you want to become a web developer. That's because it allows you to create web apps which interact with users.

So, if you're a JavaScript beginner, I'll tell you some basics to get into context and make your learning curve smoother. This way you'll understand the background instead of doing a copy-paste of code.

A variable is a representation somewhere in memory that stores a value. You can declare and initialize a variable in just one code line:

Alternatively, you can first declare the variable and then initialize it (with more than one line):

var vs let vs const

Before ECMAScript 6 (2015), the only way to declare a variable was using var. But now you can use let and const. The main differences have to do with scope, re-assignation and hoisting.

let and const have block scope, that means you can access to them just in the block code they are declared. You can understand it better after analyzing this table: 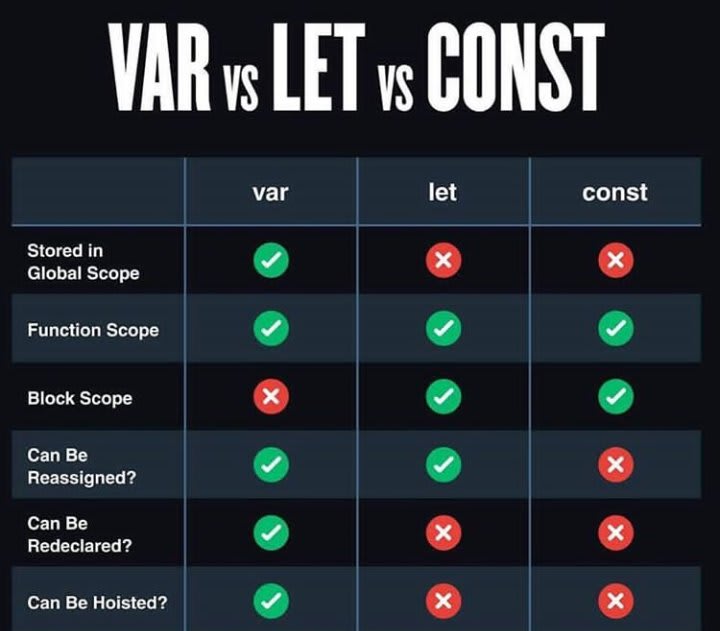 I suggest you using let or const rather than var.

A function is a block of code that perform a task. They're useful when writing web apps since they make code more readable. As a JavaScript beginner, you have all you need to understand functions.

In general, every function in all programming languages have a name, arguments to input and a result to output. By the way, there're functions that don't need arguments to be invoked.

The syntax of a JavaScript function is as follows:

Now let's see an example of a function that returns the addition of two numbers:

A new way to declare functions is arrow functions. As you advance as a developer, you'll see that arrow functions are easy to read and, sometimes, more adequate than the normal ones.

This is the syntax of an arrow function.

I'll be explaining the use of arrow functions and normal functions in other post (coming soon).

Scope in JavaScript is how accessible a variable is. There are basically two types: Local Scope and Global Scope.

You can access your variable just inside the block code or function it's declared. For example in a function:

In the same way, in a block code:

Notice that I declared x using let. If I did the opposite, using var you could access the variable outside the block code. It turns out that var declares a global variable.

In this case you can access your variable wherever in your code. For example:

As you read before, if you declare a variable using var, you create a global variable.

Arrays are a type of variable developed to store multiple variables of multiple types. They're useful when you need to store many values related to a single variable.

For instance, imagine you're managing a group of people:

As you can see, the syntax of an array is:

You can modify arrays using methods.

Objects are representations of real life things into code. So an object has properties (its characteristics) and methods (things the object can do). Let's create an object called axel:

In this example, properties are height, country and profession. You can access them using dot (.) notation:

On the other hand, returnInfo is an especial property that has a function as value. That's why it's a method. You can invoke this method:

Why did we use this while coding the element method?

this makes reference to the object itself. So we are considering height, country and profession of axel. It's an important word to take into account.

What if you have to create too many many objects of the same type? Creating 'manually' each of them is not efficient. So, to solve this problem you can use Object Templates.

Basically you create a function and, from this function, you create your objects.

juanito is created and you can access its properties:

These were some concepts you need to understand to make your learning path more productive. Basics of JavaScript are essential for every web developer.

If you're a JavaScript beginner and you think it's a lot of information, don't give up. You can master this and acquire more knowledge as time passes by. I challenge you to become a JavaScript Ninja. This is the beginning.

If you liked this post, you can subscribe. I'll continuously update blogs that may help you in your career as a developer.