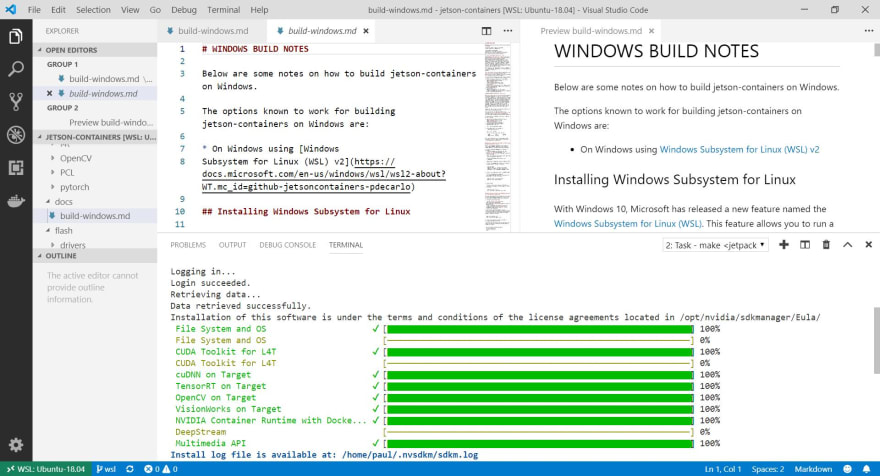 In this post, we are going to walk through building Ian Davis's jetson-containers project on Windows 10 using Visual Studio Code and version 2 of the Windows Subsystem for Linux. In a nutshell, the jetson-containers project allows you to build CUDA compatible images for running GPU accelerated applications as containers. The project supports all current Nvidia Jetson devices (Nano, TX2, Xavier etc.) and also supports third party carrier boards like the Orbitty Carrier for Nvidia Jetson TX2/TX2i/TX1.

Containerizing Nvidia CUDA drivers and the necessary runtime dependencies is exciting because it can be coupled with a container orchestrator solution like Azure IoT Edge to create cloud configurable IoT deployments which take advantage of GPU acceleration capabilities on Nvidia Jetson devices. This opens up a realm of possibilities for computer vision, ML processing, and other AI workloads that can now be deployed into edge environments and updated remotely using a cloud-defined configuration. In my opinion, this will open the world up to a new paradigm of AI solutions that will be deployed into areas never before considered and backed by first class software lifecycle support using IoT services available in Microsoft Azure.

Step 1: Installing the Windows Subsystem for Linux on Windows 10

With Windows 10, Microsoft has released a new feature named the Windows Subsystem for Linux (WSL). This feature allows you to run a bash shell directly on Windows in an Ubuntu-based environment. Within this environment you can cross compile images for AARCH64 without the need for a separate Linux VM or server. Note that while WSL can be installed with other Linux variants, such as OpenSUSE, the following instructions have only been tested with Ubuntu.

This feature is not supported in versions of Windows prior to Windows 10. In addition, it is available only for 64-bit versions of
Windows.

Full instructions to install WSL are available at the official Microsoft Docs page for WSL.

To install WSL on Windows 10 with Fall Creators Update installed (version >= 16215.0) do the following:

WSL 2 is a new version of the architecture that powers the Windows Subsystem for Linux to run ELF64 Linux binaries on Windows. Its primary goals are to increase file system performance, as well as adding full system call compatibility. This new architecture changes how these Linux binaries interact with Windows and your computer’s hardware, but still provides the same user experience as in WSL 1 (the current widely available version). Individual Linux distros can be run either as a WSL 1 distro, or as a WSL 2 distro, can be upgraded or downgraded at any time, and you can run WSL 1 and WSL 2 distros side by side. WSL 2 uses an entirely new architecture that uses a real Linux kernel.

Support for WSL v2 requires installation of WSL v1 as instructed in the previous section.

Full instructions for upgrading to WSL v2 are available at the official Microsoft Docs page for WSL v2.
To install WSL v2 on Windows 10 (version >= 18917.0) do the following:

After confirming that you are running Ubuntu-18.04 using WSL v2, you are ready to begin following the "Cross-Compilation" steps below.

We will use the Ubuntu 18.04 WSL v2 environment to cross-compile AARCH64 compatible jetson-containers images capable of running on Nvidia Jetson hardware.

1). Install the Nvidia SdkManager into the WSL v2 Environment

After you have setup the Cross-Compilation environment on Ubuntu using Windows Subsystem for Linux v2, you are now ready to beging building jetson-containers. 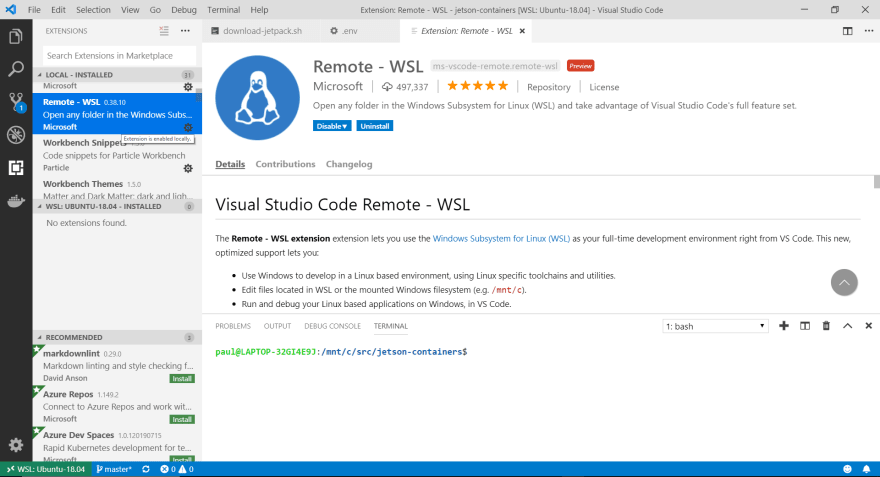 Note: You may want to add these lines to your ~/.bashrc file if you wish to start these services automatically when starting a new WSL v2 instance 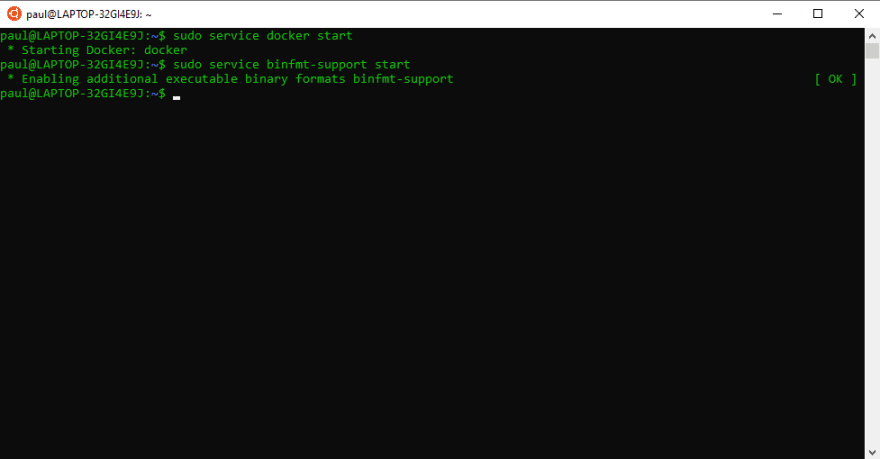 3). Clone jetson-containers project into WSL v2 environment and Open in VS Code

4). Run build tasks in VS Code to create jetson-containers images

Note: It is required to build one of the <jetpack-depencies> dependency images before building subsequent containers. This will require that you have an active account from https://developer.nvidia.com and that you have specified that user as the value of NV_USER in the .env file you created. Please be aware that you will be prompted for the account password during the retrieval of the sdks during the build process for any of the tasks. 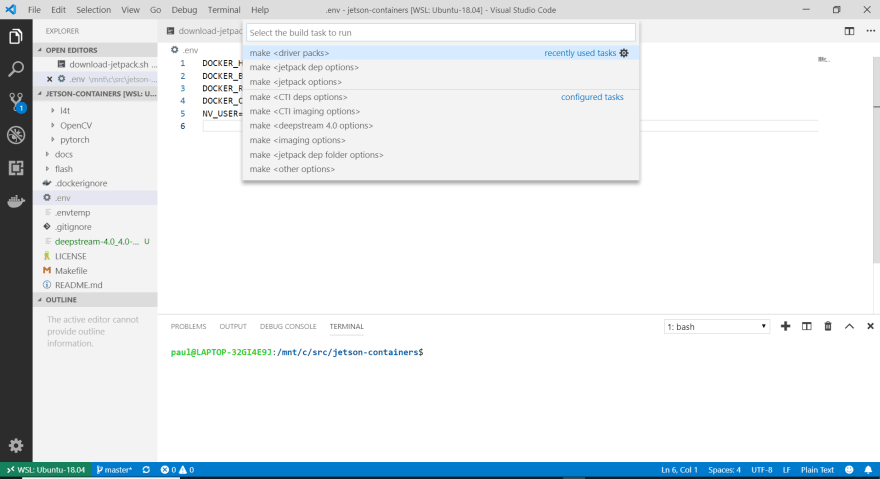 It is amazing to see that the Windows Subsystem for Linux v2 is capable of building native AARCH64 compatible containers with CUDA support from Visual Studio Code. WSL v2 brings a fully-compatible Linux Subsystem with 100% Linux syscall compatibility, allowing to build basically anything that you can build in a native Linux environment. When coupled with the Remote WSL extension , we can perform builds against the Linux Subsystem from Windows 10 allowing for a truly cross-platform development experience.

What is also amazing is that Ian Davis has curated every currently available Jetson platform into his jetson-containers project, allowing us to build containers for a completely foreign architecture (ARM64) that are compatible with Nvidia GPU accelerated hardware. Since WSL v2 can allow us to build pretty much anything that Linux can, we can now bring this ability to develop GPU accelerated container solutions to developers on Windows using VS Code with WSL v2.

As development of jetson-containers progresses, you can expect to see more details on how to use it in my upcoming articles. For a look at related content on dev.to, check out Supercharge your containerized IoT workloads with GPU Acceleration on Nvidia Jetson devices, Getting Started with IoT Edge Development on Nvidia Jetson Devices, Getting started with DevOps CI / CD Pipelines on Nvidia ARM64 Devices, and Using Cognitive Services Containers with Azure IoT Edge

Until next time, Happy Hacking!

How to resolve python command not found error in Linux