We're only just starting to understand the true potential of technology at the intersection of Artificial Intelligence, MLOps (Machine Learning & DevOps), Cloud Computing and Edge Computing - but the possibilities are endless.

For the past few years, our AI Engineers, Data Scientists and Cloud Advocates at Microsoft have been working with the University of Oxford to further the development of these technologies and further the practical application of these in the world.

The collaboration has resulted in the University of Oxford offering specific courses on AI and Cloud/Edge computing - and on the development of the AI Edge Engineer Learning Path on Microsoft Learn.

On the 1st October we brought together the team at Microsoft and the academics at University of Oxford that worked to build this learning path - watch the show to find out more about this free Learning Path, as well as some of the amazing applications of these technologies. 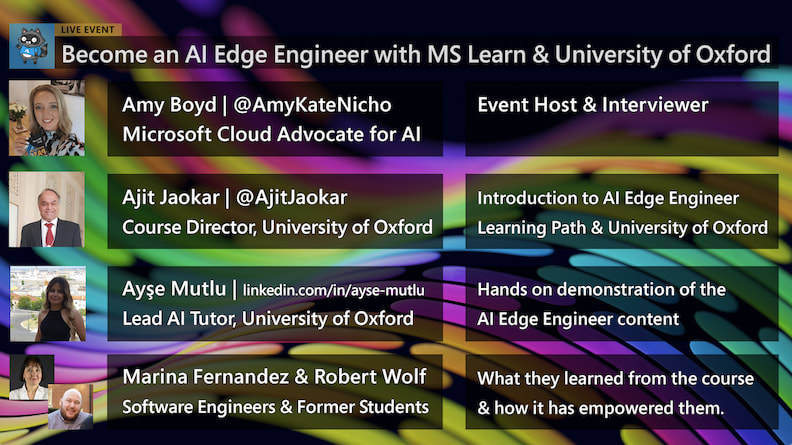 On this show we met:

Here are the links shared on the show:

A huge thank you to all of the on-air team as well as Salman Chishti and Lee Stott for their efforts behind the scenes.

Azure-cli: Installing the tool on Linux

How to use PyTorch from Perl?

Once unpublished, this post will become invisible to the public and only accessible to Adam Jackson.