YAML files are files that let us define a configuration of whatever it may be.

No, not like that, more YAML as in Camel 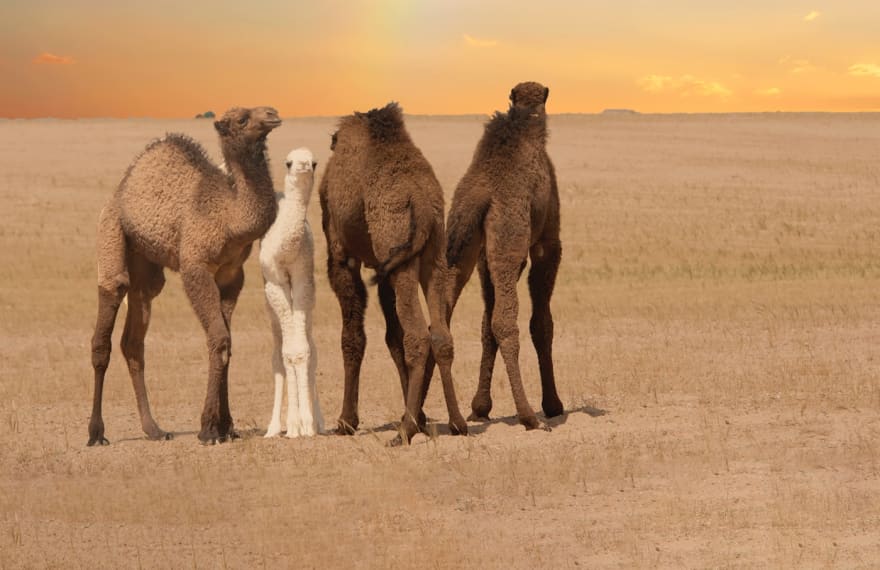 YAML actually stands for "YAML Ain't Markup Language" even though it from the beginning stood for Yet Another Markup Language. The reason for changing its meaning was to make clear its purpose as data-oriented, rather than document markup.

Yep, you got it, it's a recursive definition. It's also called a human-readable data serialization language.

Thanks for the history lesson, what about its role in Kubernetes?

As we said before we've been showing you Kubernetes usage by using the command line and that ain't quite how people use it.

Let me guess I use YAML files

Right, every single thing you can describe and deploy to Kubernetes can be described as a YAML file. It's actually simpler that way as well. But before we talk about specific Kubernetes usage we need to know some basics about the YAML files, so to understand the file when we are looking at it

This article isn't really part of a series but I have written other parts on it. If you are completely new I recommend reading part I first below

Below is some more resource that I recommend you have a look at when Kubernetes is starting to click:

What do we need to know about the format to be able to work with it? Well, YAML is a superset of JSON which makes a JSON file a valid YAML file. That's an interesting piece of information but really want to know is the structures used within namely:

Let's start with creating a file, let's call it config.yaml:

This above right here contains some useful insights on the YAML format. The --- is called a separator and is optional unless we have more than one structure in the file. What we see after that is version and name. The key is separated by its value with :.

This is supposed to be a superset of JSON right, aren't we missing double quotations?

Ah, sharp eyes, double quotations "" are actually optional. Why write more than you have to right? So the above corresponds to the following in JSON:

The above is a map, but one of the keys in your Map can point to a map in turn, like the below example:

Ok then, let's look at our next format lists. Consider the following example:

todos in this case is the list type and this would correspond to the following in JSON:

The above would correspond to the following JSON:

I get it, I think. What about Kubernetes?

Oh, one more thing before we turn all Kubernetes. Tabs = NOT cool. Spaces are what you use but be consistent, if you start using 2 spaces, usee that throughout.

Most of the things you can deploy to a Cluster in Kubernetes can be described as a YAML file. There are some obvious advantages to that:

So what are we going to describe in YAML then? We will not only describe but deploy the following:

Describe and deploy a Pod

Lets build up YAML file for a Pod gradually and finish off by deploying to the Cluster. Ok, here we go:

We start by specifying an apiVersion. Then we continue with specifying kind: Pod. Now this one is important. This can be many different types like a Deployment or a Service for example, Pod it is.

Metadata
The next part of our file is the metadata part. Here we give it a name and also a label:

Now we come to the part where we describe the parts that make up the Pod.

All put together our pod.yaml file should now look like this:

At this point we want to deploy it to a cluster. So we will talk to our old friend again, minikube and kubectl.

Sometimes my minikube is a bit slow so I restart it with the command minikube start. Once that command has finished running let's check the pod situation with:

It should list all the Pods that are currently up and running:

As you can see above we have done a fair bit of experimenting in the past and created all sorts of Pods, this will obviously look different for you.

Thereafter let's take our pod.yaml file and create a Pod from it. To do that we run the command:

Which simply means create a Pod from a file -f, with file name pod.yaml. The result of this command is:

The result of the command implies we got a Pod created, let's rerun our pods listing command:

This time around our new Pod is up and running. But of course, deploying just a Pod like this is no good. The reason is that Pods are mortal, if it goes down, its gone. No service will bring it up again.

So why even show it?

It might be educational to show how you can create an artifact from a file but from a Kubernetes standpoint, it's not using all the wonderful services that could keep it alive if something happens. After all, that's why we have Kubernetes, for the resilience.

Therefore, let's look at a deployment next.

Before we continue let's clean up after ourselves with:

This trigger something called a graceful termination, which is the recommended way of doing things. If you are impatient though you can force delete it with the following command:

We of course delete the graceful way so after a while we get this:

Were you to run kubectl get pods our pod is now gone. All our app data, gone, vamose.

I get it, take it easy, I won't create Pods directly, can we continue?

Ok then, deployments, the right way of doing things.

We will use something called a ReplicationController. Now, this is technically an older concept that is gradually being replaced by Deployments which are a high-level concept managing the deployment of ReplicaSets. There are issues on dashboard support and other things still, which makes all these similar concepts hang around to confuse us a bit more ;) Bottom line is its ok to use these older concepts for still some time.

This time around we will define a new type of object, a so-called ReplicationController. Now, this is a deployment that not only points out what image to deploy to a Pod but also how many Pods we want any given point, a so-called desired state. Let's have a look at the file, starting from the top:

We define the kind as of type ReplicationController instead of Pod and we go on to name it in the metadata as my-rc. Now let's head down to the specification part:

The really interesting part here is replicas, the number of Pods and the rest of it is mainly us pointing out the same image again.

The specification looks slightly different at the top level, as it is a ReplicationController but the inner spec is what we are used to, pointing out the image, port and other things. Let's see the full file that we name rc.yaml:

We create the above deployment based on the file by typing:

Above we see that our replication controller is created.

Lets list all our pods right now and make sure we get as many pods as expected: 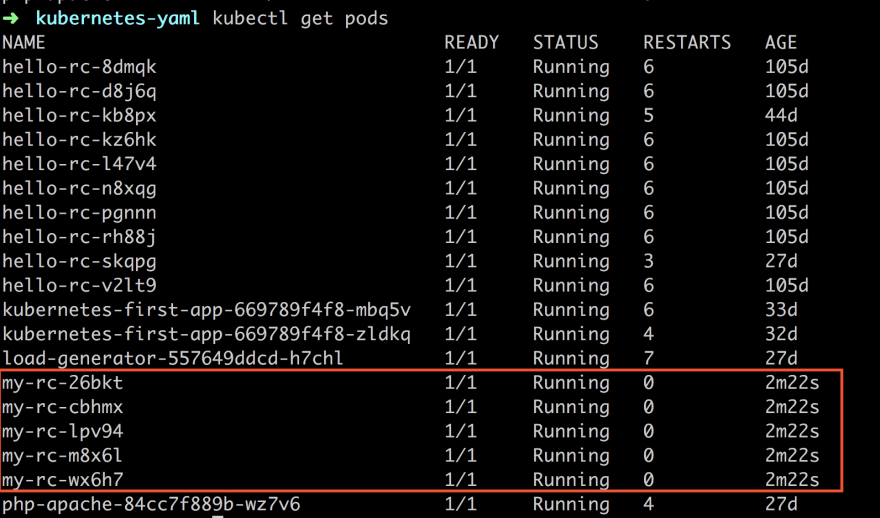 Looking at the above listing we see that we have 5 replicas, 5 instances of our Pod. We could try and delete one and see what happens:

It tells us the above Pod is deleted so we wait for the graceful deletion to finish and then we list our Pods again and this is what we get:

As you can see above, our specific Pod is deleted but it's being replaced by another one, the number of replicas is intact, Kubernetes is doing its job

So how do we bring it down, garlic, a stake?

Now there are two way we can bring it down, garlic or deletion ;)

It's as simple as typing

Let's take away the other replication controller as well, it's been hanging around my system for far too long:

and you will be able to see the Pods being terminated:

In this article, we talked about the file format YAML, what it is, how it works. We also discussed how we should be using YAML files to configure our Kubernetes experience. Furthermore, we showed how to deploy Pods but also ReplicationControllers. Hopefully, this was educational and gave you a taste on what real Kubernetes management looks like.

Microsoft Azure
Any language. Any platform.

Why Should You Use Streaming Data Platforms Like Kafka?