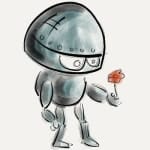 What software development tools (libraries/frameworks/apps/whatever) make you feel relaxed while you're working with them?

Do you even use CSS floats these days 🤔