GitHub Actions are a new way to create custom workflows on GitHub. They are language agnostic, so whether you prefer to write them in Python, Node.js, Ruby or PHP, you can do so. Once the proper folder structure is created in your GitHub repository, GitHub will immediately recognize the presence of a new Action, and act accordingly.

(tl;dr You can view this Action on GitHub right now.)

There are so many possible things you can do with GitHub actions, it would take an entire blog post to just begin to describe them.

For me, I wanted to build an Action to automate the importing of my DEV blog posts into my Jekyll site on a cron schedule. I really enjoy the writing experience on DEV and want to keep that as my primary blogging platform, while also importing that data into my personal site.

In this case, the end objective will be to have a GitHub Action that:

Furthermore, in my use case, I wanted to keep the number of blog posts on my Jekyll site limited to a specific number of recent posts as specified in an environment variable, ${NUM_OF_POSTS}. Therefore, I wanted the Action to also do the following:

I specifically wanted the Action to raise a pull request from a new branch, and not just commit the changes, because I try to follow the GitHub flow for new work. I wanted my Action to also follow that flow. 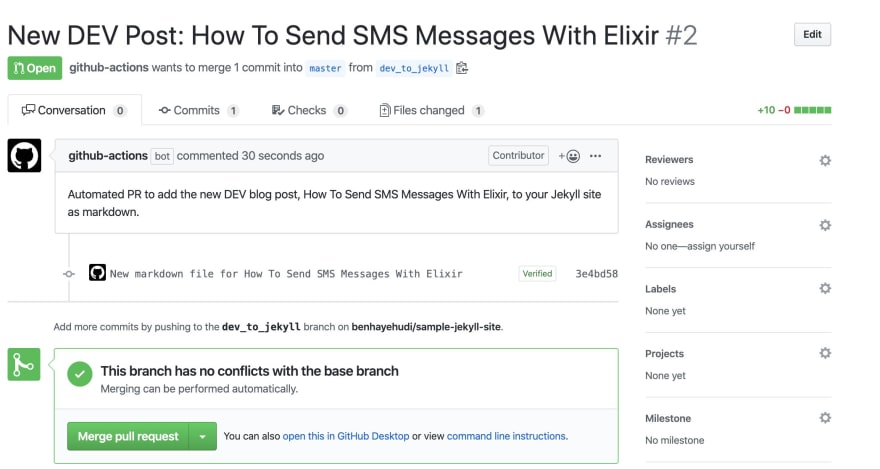 The first item I did in creating the Action was add an action.yml file that contained some basic information about the Action:

Specifically, in the above file, I defined the name of the Action, a brief description, and that I want it to run on Docker. If I publish the Action to the GitHub Marketplace, I also specified the icon and color to use for the listing.

Once that is done, I moved on to building the actual Action. All the code for it is located inside an index.js file.

Initially, I set up my require statements. The Action requires the following dependencies:

I used Jason Ectovich's actions-toolkit to interact with the GitHub API. I also used dotenv to manage my environment variables, axios for my asynchronous API calls and btoa to Base64 encode the contents of the new Jekyll markdown file to be created as part of the pull request.

All the code for the Action is wrapped inside a Toolkit.run() function. Once I get some basic repository information from the GitHub API stored in variables to be used later, the next thing to do was to get my posts from the DEV API. That is accomplished using axios:

At this point, the devPosts variable holds my most recent DEV posts.

Next, I needed to also get the contents of my Jekyll site's _posts folder. I did that using the toolkit:

The posts variable holds now the contents of my _posts folder.

During this time I also store some data points in variables to be used later:

I also create the file name for the newest markdown Jekyll post. I do that by manipulating the data returned from DEV into the pattern used for my Jekyll file names:

Now I am ready to check on the conditions necessary for making a new pull request. I need to answer the following conditions:

The answer to each question above will alter the course of action the code takes.

If the conditions are met, the Action will end up creating a pull request that adds a new markdown file with the following contents:

I could have also added the entire DEV post to the markdown file, or only a portion of the text, but in my use case on my personal site, I only want to create a small blog post card that links to the blog post on DEV.

Depending on the number of current posts in the Jekyll _posts folder, the pull request may also include the deletion of the oldest Jekyll post:

The process of building this action was a great learning experience for me. I knew that I wanted to keep a current list of my most recent blog posts on my personal site. I also knew that I did not want to manually manage that process. The GitHub Actions tooling provided me with the opportunity to build an automated workflow to manage that process for me.

I 💙Contributions! If you have ideas for improvements and enhancements, please bring them. If you would like to use this Action in your own project, please do that as well! I'd love to hear about how you are using it.

The DEV Posts to Jekyll Markdown Action can be found on GitHub.

Once unpublished, this post will become invisible to the public and only accessible to Ben Greenberg.

Thanks for keeping DEV Community 👩‍💻👨‍💻 safe. Here is what you can do to flag bengreenberg:

Unflagging bengreenberg will restore default visibility to their posts.