One of my biggest problems with JavaScript and Node.js dependency trees is that it's... never been super easy to understand what you've got and what you can do to remediate.

I've been exploring the npm ls API a bit more recently, and wanted to share some of the things I've found that I wish I'd known about over the last few years!

An Introduction to npm ls

If you're not familiar with npm ls, it's a command available with the npm CLI that will list dependencies that have been installed to node_modules. Additionally, it will return a non-zero exit code if the dependency tree that's resolved in node_modules is not what should be resolved from package.json.

Here's a quick example of npm ls from one of my projects, good-first-issue:

By just running npm install, I'll get 1337 modules in total. Yes, that's the real number with the module's current package.json – I'm just as surprised as you!

If you scroll through that list, you'll see a bunch of lines with deduped at the end. This means that npm was able to resolve a version of that module that met the requirements of multiple dependencies that require it to be installed. With my first-ever grep command (grep deduped npm-ls.txt -c), I was able to find the total number of modules that were deduped: 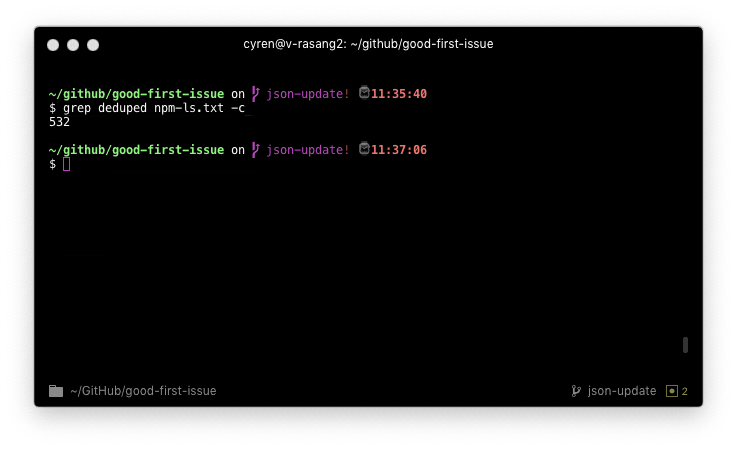 It turns out that of 1337 modules, 532 were successfully deduped. It's worth noting that every line with deduped is a module that didn't need to be installed because it was installed via another path that isn't marked as deduped. Given this context, we know that there were 805 modules installed in total.

Bare vs. --production vs. --development

Being able to understand our dependency tree better is awesome! That said, npm ls by itself will tell you the current state of the entire node_modules directory... if you care about what's going to production, it'd be nice to separate the dependencies that will be shipped to production from the devDependencies that are simply used to make your life as a developer easier.

From running npm ls --production on the same project, we get a... much smaller result:

Understanding the modules introduced into production is fantastic and super valuable. But, what if you also want to understand your development dependencies?

Luckily, npm ls also provides a --development flag that allows you to understand the dependencies that are only used in development. There are a few more advanced use cases for this, most of which are geared toward helping developers like you and I understand what's being used locally and how it could be optimized.

One neat feature of npm ls is the ability to pass a package name as an argument to the command. For example, if I wanted to find all instances of graceful-fs in my dependency tree I can run npm ls graceful-fs which will spit out the following: 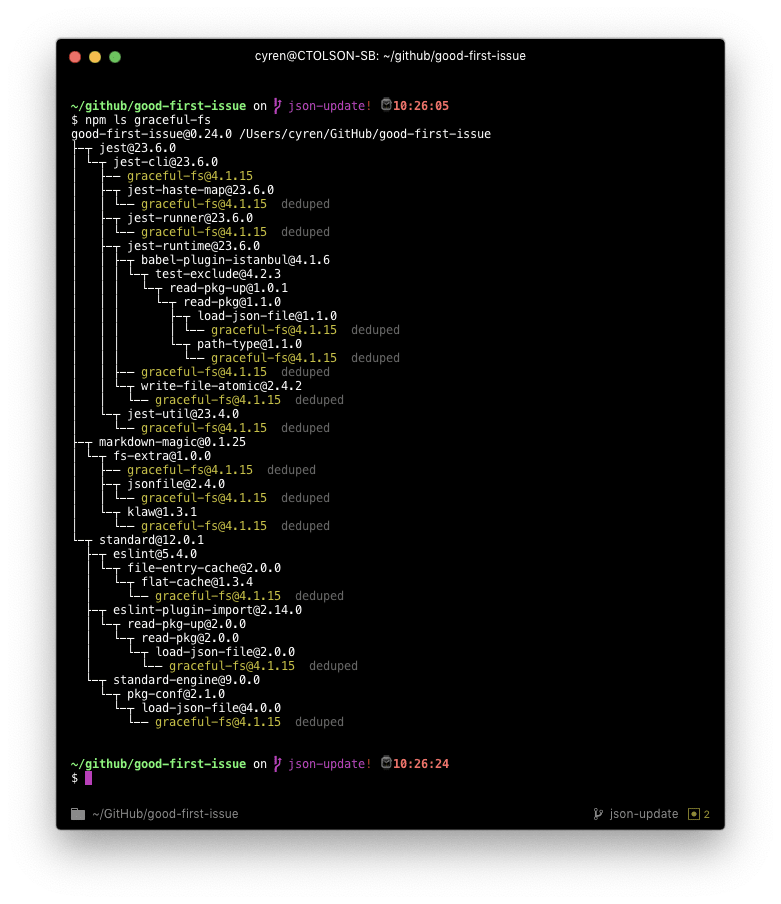 For me, this is a stand-out feature! I spend a lot of time exploring the security space within Node.js and the JavaScript module ecosystem. This particular feature is incredibly useful to me, as one of the most common ways that you'll introduce security vulnerabilities is through your dependency tree (rather than directly introducing them in package.json). Being able to surface all instances of a specific module you know is vulnerable is extremely useful, and this command makes that super simple.

Usage in CI/CD for JavaScript projects

In a recent discussion in the Node.js Package Maintenance team, usage of npm ls in CI/CD environments was raised as a possible best practice to ensure that the dependency tree that's being resolved by npm is entirely valid and will be able to run.

I'd not thought about this before, but it's an astoundingly good safeguard. Since npm ls will exit with a non-zero exit code if the dependency tree is invalid, the command effectively becomes a zero-effort safeguard in your CI/CD to make sure your dependency tree is resolving exactly how it should. Additionally, this idea can be combined with npm ls --production for production builds!

I've been exploring npm ls a bit over the past few days, so I wanted to share my knowledge with y'all. I'm totally sure there's still more utility I've not discovered in the command, and would absolutely love to hear about it if you've got any tips! Additionally, I'd love to know if you're going to start using npm ls more, and how you're planning on using it! 💖

Once suspended, bnb will not be able to comment or publish posts until their suspension is removed.

Once unsuspended, bnb will be able to comment and publish posts again.

Once unpublished, all posts by bnb will become hidden and only accessible to themselves.

If bnb is not suspended, they can still re-publish their posts from their dashboard.

Once unpublished, this post will become invisible to the public and only accessible to Tierney Cyren.

Thanks for keeping DEV Community 👩‍💻👨‍💻 safe. Here is what you can do to flag bnb:

Unflagging bnb will restore default visibility to their posts.