In this post I will show you how to set up a .NET Core application with a Svelte frontend for development.

You've probably heard of React, Vue and Angular by now. Svelte is an alternative to those with some important differences which make it stand out:

Traditional frameworks allow you to write declarative state-driven code, but there's a penalty: the browser must do extra work to convert those declarative structures into DOM operations, using techniques like virtual DOM diffing that eat into your frame budget and tax the garbage collector.

Instead, Svelte runs at build time, converting your components into highly efficient imperative code that surgically updates the DOM. As a result, you're able to write ambitious applications with excellent performance characteristics.

Personally, I like Svelte because I just find it so easy - jQuery easy - to build applications with. If you already have a good grasp of JavaScript, HTML and CSS then there isn't much more to learn in order to get started.

Have the following installed:

This creates a dotnet-svelte directory then places the Svelte starter template in there. Next thing to do is spin up a .NET Core Web Application within that folder:

This makes things a bit more in line with .NET conventions.

The Svelte starter template uses sirv during development to serve static files. We can switch to using our .NET application by applying the modifications below.

A little further down, also update the directory livereload watches:

On the .NET side we can tell it to serve the static content which Svelte generates.

In the Configure method:

Open your browser at http://localhost:5000 and you should be greeted with: 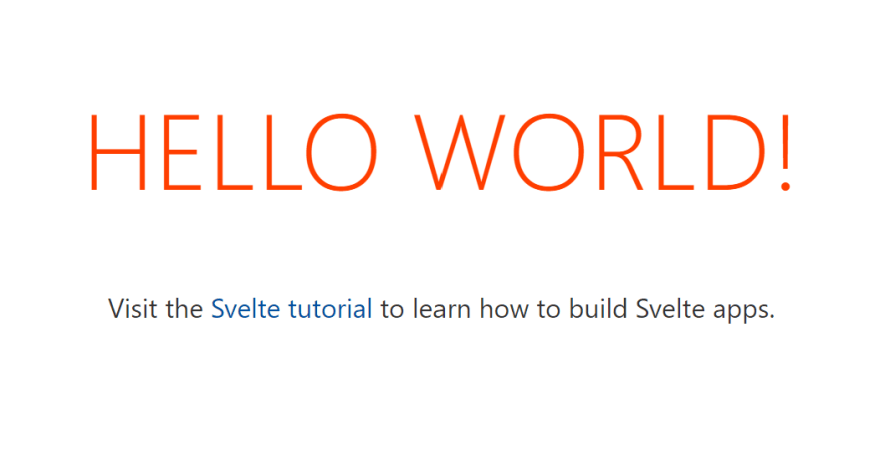 We took the Svelte starter template, tweaked it a little to fit with some .NET Core defaults then quickly set up a .NET Core service to serve the static files built by Svelte.

From here you can start building out your application.

At some point, you will need to deploy this somewhere which will require building both applications separately then combining the results. I'll cover that in a separate post.