Here is what happens during a P2P connection, and all you need to know about Web Real-Time Communication

Everything you need to know about Web RTC in 9 minutes

Today, it is known as the Web RTC that we use every day in Chrome, Mozilla Firefox, Opera, Safari, Edge, iOS, and Android.

WebRTC stands for Web Real-Time Communication, which is a networking technology introduced in 2011 by Google to enable real-time audio, video, and data transmission across the web and native browsers.

"Its mission is to enable rich, high-quality RTC applications to be developed for the browser, mobile platforms, and IoT devices, and allow them all to communicate via a common set of protocols."

WebRTC allows web apps to create Peer-To-Peer communication. WebRTC is a vast topic, so in this post, we'll focus on the following issues of WebRTC:

What happens during the P2P connection

Image by PubNubTo connect two browsers, Web RTC is required to perform five steps to set up a P2P connection. 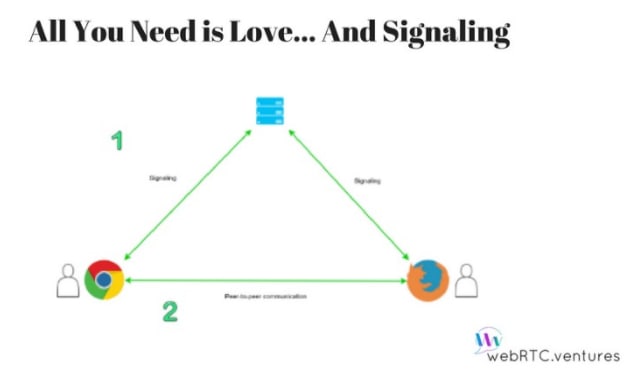 NATs translate a private IP address found on devices like a home router to a public IP address. Firewalls and NATs slow the process by blocking specific protocols or ports. The solution WebRTC uses is a framework called ICE.
ICE establishes a P2P connection over the internet by trying all connections in parallel and selecting the most efficient path. There are two types of connections: STUN & TURN

It first works connecting through a STUN (Session Traversal Utilities for NAT) server to get a direct link through the network address.

A STUN server provides the requestor a public IP address to communicate with others. Its purpose is to help a requestor answer the question, "What's my IP Address?" To set up a connection with other peers, an endpoint is required to know its public IP to share with others.

However, the situation above may sometimes fail, and the PORT and IP number will be changed.

This situation is called "symmetric NAT" as the public IP address of the STUN server does not have enough capability to establish connectivity here, as the port would also need a translation.

Some routers use Symmetric NAT, which is made to add another security layer to the endpoint or avoid many strangers to connect to your device. A Symmetric NAT not only translates the IP address from private to public but also translates ports.

In other words, the router will only accept connections from known peers that the user previously connected to. Hence, another solution is made to ensure that the connection between two peers is successful is through the TURN server.

Why STUN servers are useful

As a protocol, STUN is super fast, lightweight, and straightforward. It allows the media to travel directly to each other in a short time. STUN is beneficial to speed up the connection and get the result faster in real-time.

The scenario is similar when the user is using LAN to download the data, which is faster than downloading from the Wi-fi. Most importantly, it allows the media to travel directly between both endpoints. STUN can be used publicly and free.

A TURN server keeps relaying the media between the WebRTC peers. That is why the term "relay" is used to define TURN. 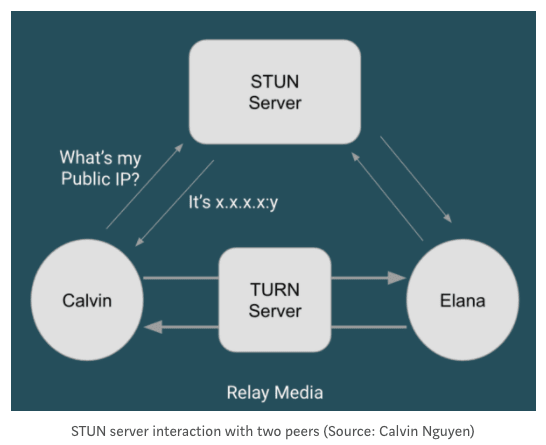 This relay server is used to relay traffic if the STUN server fails, and it also has the STUN's functions.

The TURN server is a STUN server with transmitting capability built-in. More specifically, TURN is used to relay audio/video/data streaming between peers, not signaling data.

One main reason why a STUN server is always used first is that the TURN server is too expensive, and uses massive bandwidth if HD Video is streamed online.

One of the main features, why many people start to use WebRTC, is for video streaming. As live video becomes more mainstream and starts getting higher quality, it requires data transfer to be faster or the packet size to be smaller to be easily transferred.

That is when VP9 Video Codec takes place to compress and decompress the audio or video. It helps stream video quicker and more apparent. By supporting VP8, Safari 12.1 can exchange live video with other peers. 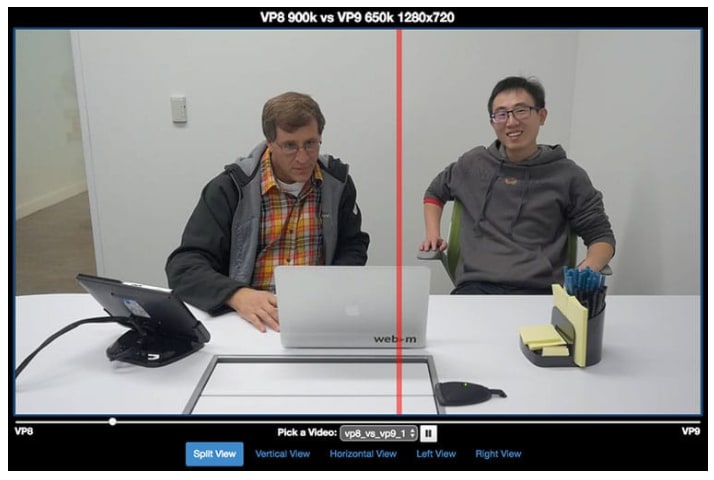 VP9, which is an improvement from VP8, is a video compression format owned by Google and created by On2 Technologies.

The main feature is to conceal packet loss and clean up noisy images, as well as capture and playback capabilities across multiple platforms.

With VP9, users can use WebRTC to stream a 720p video without packet loss or delay. It can also support a 1080p video call at the same bandwidth and helps reduce poor connections and data usage to avoid expensive costs for users.

One of the security risks in any real-time communication application may raise during the transmission of data. Eventually, encryption is a mandatory feature of WebRTC and is enforced on all components.

Steps to secure a link between 2 peers

Applications that use WebRTC

For more, you can check out this link for a list of apps that use WebRTC
http://www.webrtcworld.com/webrtc-list.aspx

Follow me here to get the latest blog posts