This year, I’ll be making 12 projects in 12 months. They’ll mostly involve circuits and coding, maybe costumes and cardboard. Some will be useful, some will be silly, all will be fun. Follow my progress with #12MonthsOfMakes on Twitter, or right here on Dev.to!

When I was a tiny young human, people would ask me what I wanted to become when I grew up. Back then, I thought the only jobs available were firefighter, doctor, lawyer, policeman, or inventor. I would say “I want to be an inventor!” even though I didn’t know what that meant, or if it was even a real job. I just knew that I liked to take toys apart and put them back together, and sometimes I would make something new out of it. Sometimes (ok, most times) I’d also end up breaking it, but that was part of the fun!

But then I became a developer advocate, and my genius coworker had a genius idea:

Genius coworker: “What if we made a hat that lights up whenever you get into an Uber ride?”

This is a hat. A shark hat.

Meet Humphrey the Sharknicorn. It’s a shark with a 3D printed unicorn horn that lights up depending on the state of your Uber ride. It uses the Uber API to get notified if you just ordered a ride, and triggers different light animations depending on whether you just ordered a ride, or when the driver is about to arrive, or when you are in the middle of the ride. It was such a fun project, and I learned a ton about circuits, soldering and 3D printing. Plus, it’s the silliest thing to put on your head! Disclaimer: I did not make the shark hat itself. 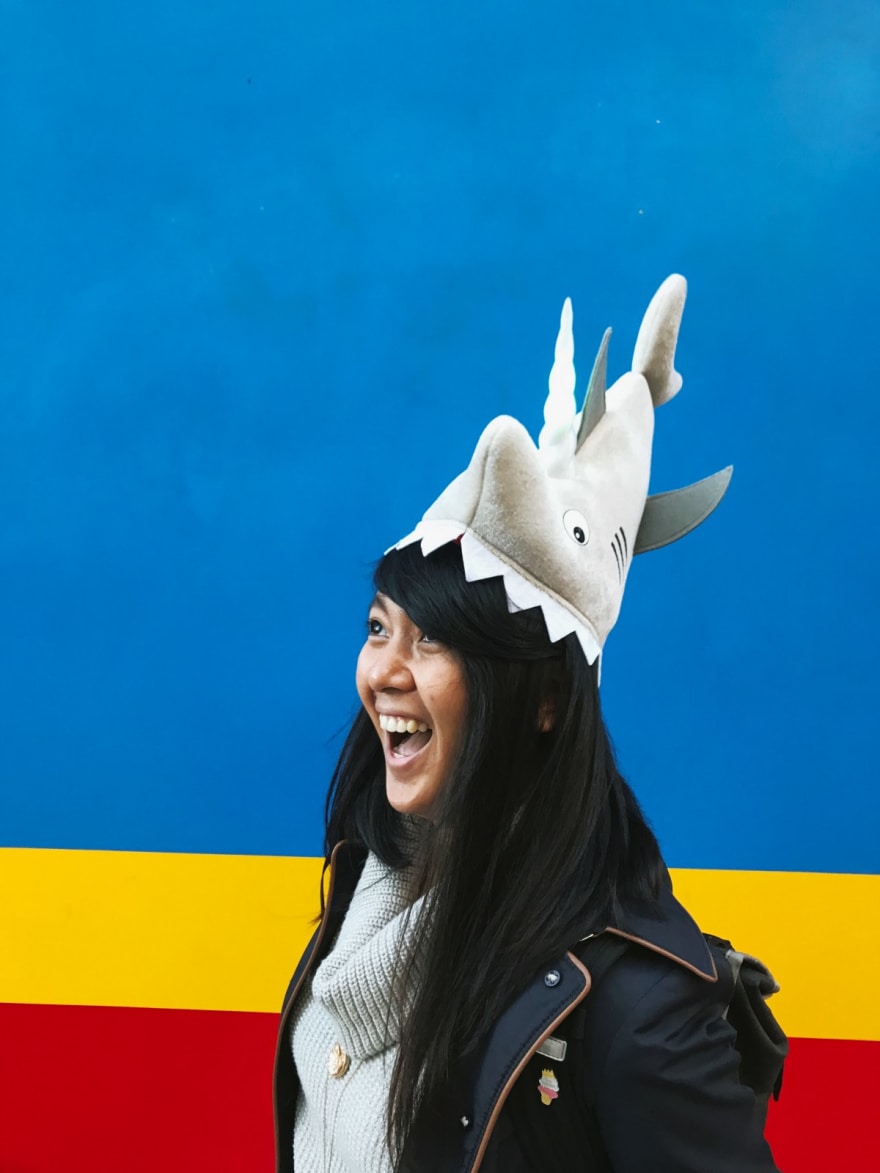 Do not be alarmed! No heads or sharks were harmed in the taking of this photo.

This project really made me remember my forgotten childhood dream of inventing. There’s something so viscerally satisfying about holding something you created with your own hands. I’ve always liked crafting and making things, but to be able to put together my love of coding and my love of tinkering was just so giggle inducing. Look at how ridiculous my smile is in that photo.

And I realized that there are a lot of us out there that want to be creative with our code. I want to find more people who like to make things, and I want to be able to share this awesome bubbly happiness I feel over soldering irons while learning something new.

And there's so much to learn! How do I get the perfect Benchy print? How do I solder wires to an SPDT slide switch without pulling my hair out? Therefore, I decided to make one project per month for the entire year. I’ve never done anything like this before, this is honestly quite daunting, so come with me on this journey. Let’s learn about the world of making together!

This was originally posted on Medium, lightly edited here for your reading pleasure.

Need another side project idea?

Charlyn Gonda
Charlyn Gonda is a coder by day, maker by night. She is part of a group called Day Coders // Night Makers, and is currently in the middle of her year long project 12 Months of Makes.
How to get inspired (about making things!)
#12monthsofmakes #maker #building #inspiration
February Make: Pusheen Heart
#12monthsofmakes #neopixel #particle #valentines

Once suspended, charlyn will not be able to comment or publish posts until their suspension is removed.

Once unsuspended, charlyn will be able to comment and publish posts again.

Once unpublished, all posts by charlyn will become hidden and only accessible to themselves.

If charlyn is not suspended, they can still re-publish their posts from their dashboard.

Once unpublished, this post will become invisible to the public and only accessible to Charlyn Gonda.

Thanks for keeping DEV Community 👩‍💻👨‍💻 safe. Here is what you can do to flag charlyn:

Unflagging charlyn will restore default visibility to their posts.