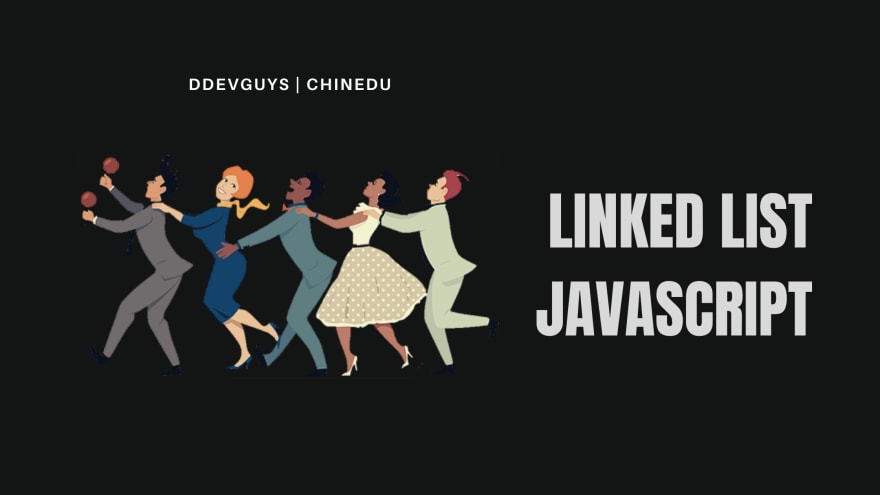 Continuing the series of our data structures and algorithm.

In this article I will be teaching you how to implement a popular data structure called the linked list.

Hey dude…this is going to be a long one grab that cup of coffee, tea or whatever it is you guys drink these days…maybe a bottle of beer. Looooooooooool.

A linked list is a data structure that permits insertion and deletion of items from it and would grow accordingly.

Each element in the linked-list consist of a node that stores the element itself and a reference which is also called a link/pointer to the next element.

Let's look at some examples of a linked list

Let's use a conga line as an example.

The above gif is an example of a conga line. 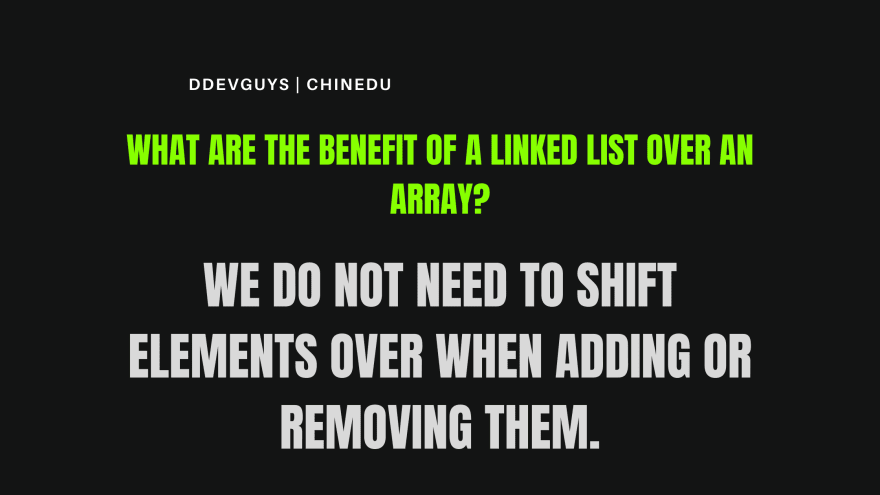 It is worth pointing out that there are 4 types of linked-list.

This is the most commonly used linked list. In a singly linked list, each node contains two parts.

One part is the element and the other is a reference (pointer/link) to the next node.

In the doubly linked list, each node contains three parts.

One part in the doubly linked list contains a link to the next node and the other part has the link to the previous node.

The difference between a circular linked list and a singly linked list is that the last nodes element does not point to null, but instead points to head which is the first element on the list. 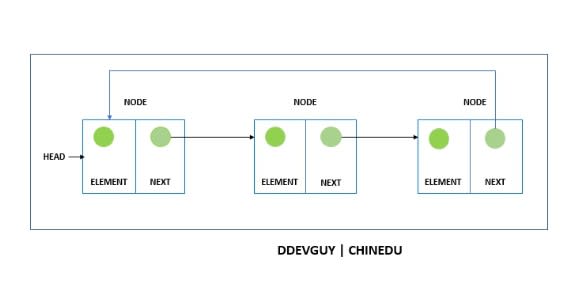 The doubly circular linked is similar to the double linked list because its nodes contain three parts.

It is also similar to the circular linked but with a slight difference being that the last node's elements points to the head while the head previous points to the tail.

Learn how to install node on windows, Mac, and Linux here.

Now you understand the theory behind the types of the linked list.
Let's implement our linked list data structure.

Since we are using classes we would first create our Node class and our linked list skeleton.

Above we have our linked list class with a head property which is where we store the reference to our node.

appendFirst: this method adds a node to the beginning of our linked list.

The insert method takes an element.

Then in this method we instantiate our node and store it in a variable called head, passing in the element which our function received and this.head as the second value of our node class.

Then we set our head variable as the head(this.head) of our linked list.
Then we increment the size.

We put the this.head in our instantiated class, because if there is already a node in the linked list head(this.head), then when adding another node to the list we push the present node to the next, but if the head(this.head) is empty then the node we are adding becomes the only node on the list.

for the sake of this article, I used vscode, and I created a file called index.js(you can name yours with any name of your choice).

Using the vscode integrated terminal would enable us to test and run our codes. 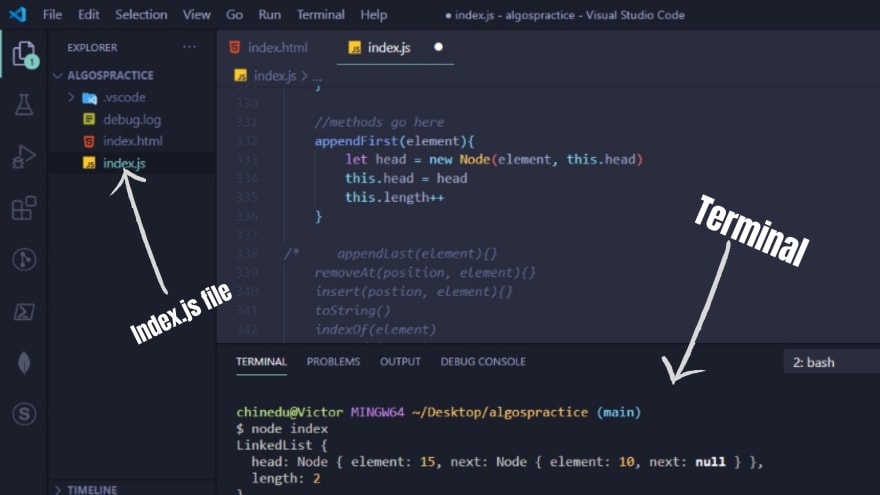 Before continuing the implementation of our linked list methods, let's implement the print method.

Print: this method enables us to log our linked list element more neatly and conveniently to the console.

In our print method, we set a variable of current to represent the head of our node.

Then we loop through all the nodes using the while loop and in the while loop, we log the current element because we just want the element property.

Then we loop through the nodes by setting the current variable to current.next.

By so doing we simply outputting each element in our linked list.

appendLast: This adds a node to the end of the linked list,

For this method, the first thing we do is to create our node instance and pass in our element value.

After that, we define a variable current for internal controls

After this, we want to implement our first case, which is when the list is empty and we want to add an element to the list.

Let's implement the second case when we are adding an element to the list if it's not empty.

So, first in our else block, we create a reference to our head.

When looping the list we know we have reached the last element only when the current.next is null.

So all we have left to do is linking the current element to the node we want to add to the list.

Then finally we want to increment the length of the list so as to keep track of how many elements we have on the list.

Below is the complete code for the appendLast method of our linked list.

removeAt: this method removes an element from the list at a specified position.

The first step is creating a method that would take the position of the element to be removed from the list.

Next using a conditional we want to check that the position we are passing in is valid.

If the position is valid, we would stem from 0 to the length of the list.

Let's handle the first case which is removing the first element on the list.

Before doing that we make reference to the first element on the list using the current variable and also declaring other variables such as previous and index which would initially be 0.

All this would be very helpful for internal controls.

Removing the first element on the list, we use a conditional, saying where the position is 0, we want to set the head to the second element on our list.

So to remove the head element we would point the head to the current.next.

Let's handle the second case where we want to remove an element from the end or middle of the list.

In other to achieve this we have to loop the list until we get the position we are looking for.

Then we set our previous to current and our current to current.next.

Then outside our while block, we can remove the current element from the linked list.

All we do is to link the previous.next to the current.next.

Note: This method works well for removing both the last and middle elements.

Below Is the complete code snippet for our removeAt method.

Insert: this method inserts a new element to a position on the list.

The first step to take is creating a method that takes a position and an element to be inserted.

Next, we need to do what we did for the removeAt method, since our method is taking values for the position, we want to insert the element, we need to make sure these values are not out of bound.

Now, let's handle the first case where we are adding an element to the first position on the list.

But before going ahead with that let's instantiate our node class as well as create some variables for internal controls.

To add an element to the first position of the linked list, we set the node.next to the current.

And simply point the head to the node.

By so doing we have another element on the list.

Handling the second case is inserting an element to the end, or the middle of our list.

The first thing we do Is loop the list until we get to the position where we want to insert an element.

We do this in our else block of code.

When we are out of the loop, the previous would be pointing to the element present before the position we want to insert a new element.

While the current variable would be pointing to the element present after the position where we would insert a new element, which is between the previous and current.

Then we need to link the new node and the current element.

After that we want to point the previous.next to node, by so doing we have successfully change the link between the previous and current.

Then after that, we want to keep track of the length property of our linked list class.

Here we decrement the length and return a string saying "a value has been added to the list".

Below is the complete code for our insert method.

indexOf: this method returns the index of an element on the inked list. If there is no element it returns -1.

First, let's create the method and pass in the element as a value.

Next, in our method we set a variable current to head that would help us iterate the list, and a variable index to increment our count.

Then using a while loop we check if the element, we are looking for is the current one by looping through the list.

If the list is empty or we get to the end of the list we where current = current.next is null we would return -1

Note: Before testing the indexOf method make sure to clear all the instances where we passed in values for our appendFirst and appendLast methods.

This is just to prevent unnecessary confusion, after doing that you can go ahead and append values last to the empty linked list. 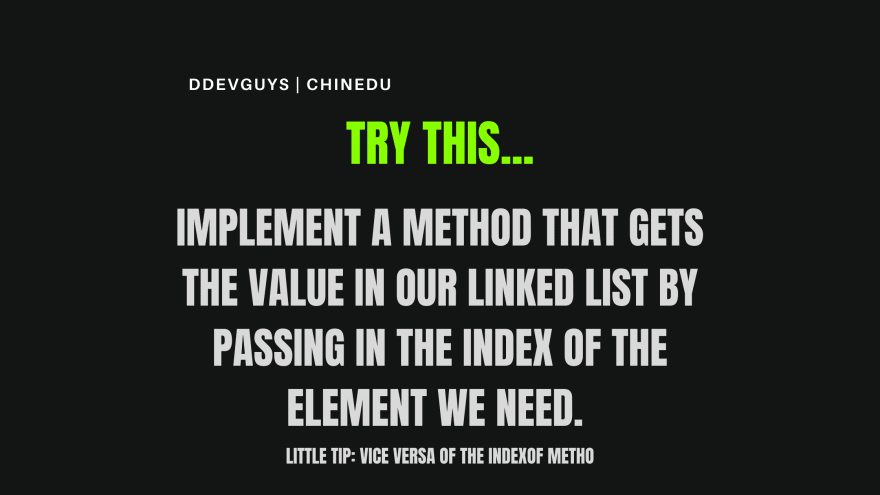 With the index method implemented, we can implement the remove method of our linked list class.

Below is the complete code for our insert method.

Remove: this method removes an element from the list.

Taking a closer look you'd see that we are reusing the index and removeAt method.

So, if we pass an element value to our indexOf method and call the index in our removeAt method this removes the element from the list.

Size: this returns the number of elements that are contained in the linked list.

The length property is controlled internally since the linked list class is built from scratch.

getHead: this returns the heads property of the linked list class.

There you have it we are done with implementing the linked list.

The linked list data structure is one of the most popular data structure and questions like reversing a linked list usually pop up in tech interviews, so it does help to completely understand the intricacies of how it works and how to implement it.

This does help get the word out so that every other person can find value in it.

Once again thank you for sticking this long, with me on this one.