This was originally published on chrisachard.com

Hooks are gaining popularity as a way to add state and effects to function components - but can they go further?

Many people find Redux confusing or verbose - so maybe hooks could serve as simple replacement... so let's find out - Can you replace Redux with hooks?

TL;DR: Hooks do a lot, but only get 3/5 stars from me for replacing Redux: ⭐️⭐️⭐️
But! It really depends on how you use Redux

Before we figure out if we can replace Redux, we first have to understand the problem it solves.

The #1 reason I reach for Redux in a project is to share state between components that are far apart in the component tree. Here's a picture of what I mean: 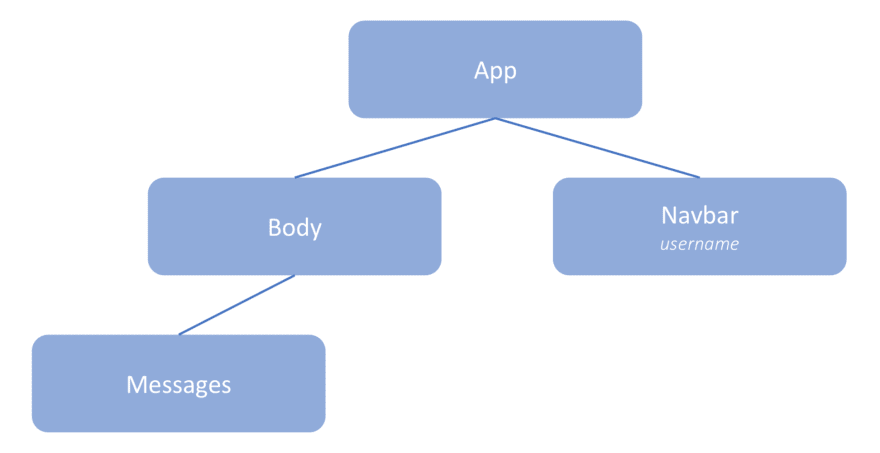 With a regular state/props strategy, if we wanted to get that username into the Messages component - then we'd need to go up through App, down through Body, and into Messages. That kind of prop drilling gets really cumbersome and verbose in large applications - so we need a way to share certain state across multiple components.

Redux fixes that by keeping a global, shared state, and allows us to access that state from any component by connecting to it.

Another major aspect of Redux is that it allows you to centralize and (potentially) reuse your business logic. You can do that in a few different ways:

There are two powerful tools that Redux can give you that help with debugging:

As actions run through a Redux application, the changes they make to the data can be traced. That trace is available in the Redux DevTools (and Redux DevTools Extension), which lets you see all of the actions performed in your app, and how it affected the state in Redux. 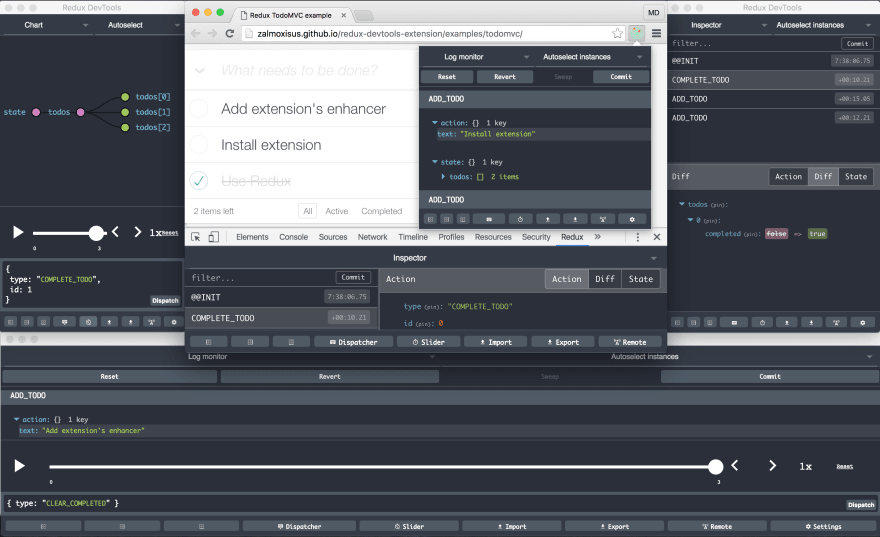 That let's you track everything that happens in your app - and if something isn't happening the way you think it should, you can see exactly why. Neat!

When you take that a step further, then you realize that you can rewind your actions just as easily as playing them forward - and you get time travel!

Going back and forward in "time" with your actions can really help for catching sticky bugs - or for catching bugs that require a lot of setup time to capture.

What do hooks give us?

Hooks were added to React in 16.8 and in particular, there are three hooks that we might be able to combine to give us Redux functionality:

Context existed before the useContext hook did, but now we have a straightforward, easy way to access context from function components.

So if we define a shared context:

and provide it to our app by wrapping the entire app with it:

Then we can consume that context in the child components:

And that works! It let's us share state across our entire application (if we want) - and use that state in any of our components.

When we get down to it, this is the component that had people excited about hooks possibly replacing Redux... after all - it has reducer right in the name! But let's check out what it actually does first.

To use useReducer, first we define a reducer function - that can look exactly like one from Redux:

Then in our component, we use the useReducer hook, passing in that reducer function and a default state. That returns the current state, and a dispatch function (again - just like Redux!)

And finally, we can use that state to show the values inside, and we can use dispatch to change them:

And here's a demo of it all working:

OK - the last thing we need then is reusable logic inside of our actions. To accomplish that, we'll take a look at useEffect, and how we can write custom hooks.

useEffect allows us to run asynchronous actions (like http requests) inside of a function component, and it lets us re-run those actions whenever certain data changes.

Let's take a look at an example:

This is just like a Redux action with redux-thunk installed. We can run an async action, and then do whatever we'd like with the result. For example - here we are loading from an http request, and setting that to some local state:

And here's a demo of that working:

And so we've re-created actions now too!

But: let's take a look at how we've done when we consider what people actually use Redux for:

In terms of shared state, we've done pretty well. We can use context to share a global state (that we keep in a reducer) with multiple components.

However, we should be careful to think that Context is the answer to all of our shared state problems. Here's a tweet from Dan Abromov (the creator of Redux) describing one of the possible downsides: 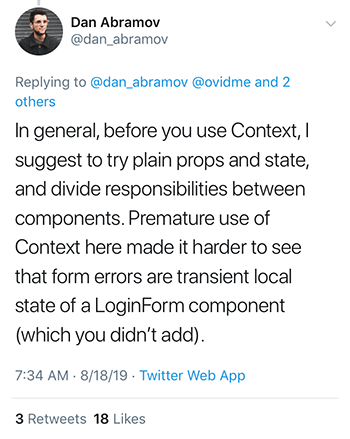 So, while Redux is meant to keep your entire state (or most of it) in a globally accessible, single store - context is really designed to only share state that is really needed to be shared across multiple components across the component tree.

Since it's possible (though perhaps shouldn't be your first choice) to share state with useContext - I'll give hooks a 4/5 stars for sharing state.

The main methods for consolidating business logic in Redux are in the reducers and in actions - which we can achieve with useReducer and useEffect ... hooray!

But we can't forget about Redux middleware, which some people use heavily, and other solutions like Redux Sagas, which can provide advanced asynchronous work flow options.

Since we're missing parts of Redux that some people use a lot, I have to give this a lower score: 3/5 stars.

If you are someone who really likes middleware or sagas though - then your score would be more like 1/5 stars here.

The one thing that hooks don't give us at all is any kind of enhanced debugging like Redux DevTools or time travel debugging.

It's true, there is the useDebugValue hook, so you can get a little bit of debugging for custom hooks - but in general, Redux is far ahead here.

We're missing almost everything here - so this score has to be low: 1/5 stars.

So, can we replace Redux with Hooks?

If you use Redux only to share state across components

If you use middleware or sagas heavily

Then no, unless you rework how to handle your application logic. Hooks just don't have the same control options that Redux does, unless you custom build it.

If you really like Redux DevTools and time travel debugging

Then definitely not, no. Hooks don't have that ability (yet?!) so you're better off sticking with Redux.

Redux hasn't been sitting by and just watching hooks! Check out these docs for hooks in Redux and you can join the hook party, even if you use Redux!

Also, for a more complete answer comparing Redux to other options, there's a post that explains that Redux is not dead yet

For how I use Redux, I give hooks a 3/5 stars for replacing Redux

At least - I'm going to try hooks first on my next project, before just jumping into Redux. However, for complex projects, with multiple developers - I wouldn't rule out Redux just yet.