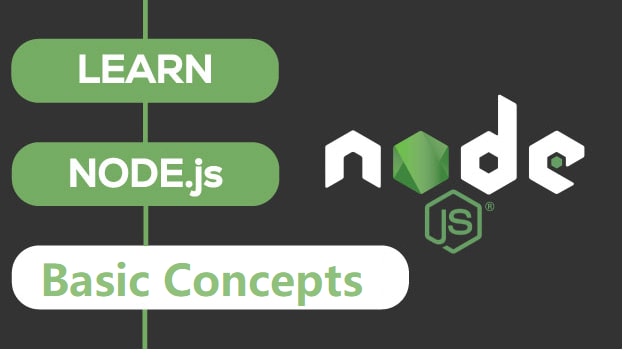 What makes the JavaScript community happy?

A sure answer is a Node.js technology that shines in the world of real-time web application development. The technology is created in 2009 by Ryan Dahl to solve many issues related to app performance.

It is worth choosing node.js as the next technology to learn as it allows you to use JavaScript both at the server and client-side. In this article, we are going to explore technology and its basic concepts every node.js beginner must know.

Well, before that check this out:

You can find more information about Node.js insights here.

What is Node.js and why do we need it?

JavaScript is the only language Node.js supports natively but many languages can be directly compiled to JS.

Why do we need Node.js?

Node.js eliminates the limitations of the multithread approach with its single-threaded characteristic.

Unlike PHP where most functions are blocked until their completion, Node.js functions are nonblocking which means commands are executed concurrently or even in parallel without blocking other commands using callbacks and other advanced mechanisms.

There are build-in modules and multiple libraries built by the developer community that simplifies and speeds up the app development process.

If you are a beginner then you must have a good understanding of following Node.js concepts.

Node.js makes extensive use of events that means the control flow of the server-side platform is driven by occurrences of events. When the application starts, it initializes the variables and functions, and then the event listener calls the Event loop.

There are mainly two-component of event-driven programming:

A Node.js app can deal with multiple events at a time using a single thread(Event loop). However, when you look into its architecture you will find that there are background threads (worker threads) running in the background that carry out CPU-intensive tasks.

The above arrangement allows Node.js to perform non-blocking operations.

(Note: Worker treads were introduced in the Node.js version 11.7.0 and above, if you are using the prior version, enable it using — experimental-worker flag when invoking Node.js)

3. NPM- A package manager for Node.js

In this short article, we have learned about Node.js, why we need it, and its basic concepts. Now, you have a basic understanding of how Node.js works.

The technology is used by many companies and startups because of its ultra-modern features. If you started using Node.js, try DhiWise- A revolutionary platform to build scalable web and mobile apps.

The platform supports popular technologies including Node.js and MongoDB. So, what are you waiting for sign up today!

Once suspended, dhiwise will not be able to comment or publish posts until their suspension is removed.

Once unsuspended, dhiwise will be able to comment and publish posts again.

Once unpublished, all posts by dhiwise will become hidden and only accessible to themselves.

If dhiwise is not suspended, they can still re-publish their posts from their dashboard.

Once unpublished, this post will become invisible to the public and only accessible to DhiWise.

Thanks for keeping DEV Community 👩‍💻👨‍💻 safe. Here is what you can do to flag dhiwise:

Unflagging dhiwise will restore default visibility to their posts.