I found that there was no Chess representation written in Erlang. So, I wrote Binbo. 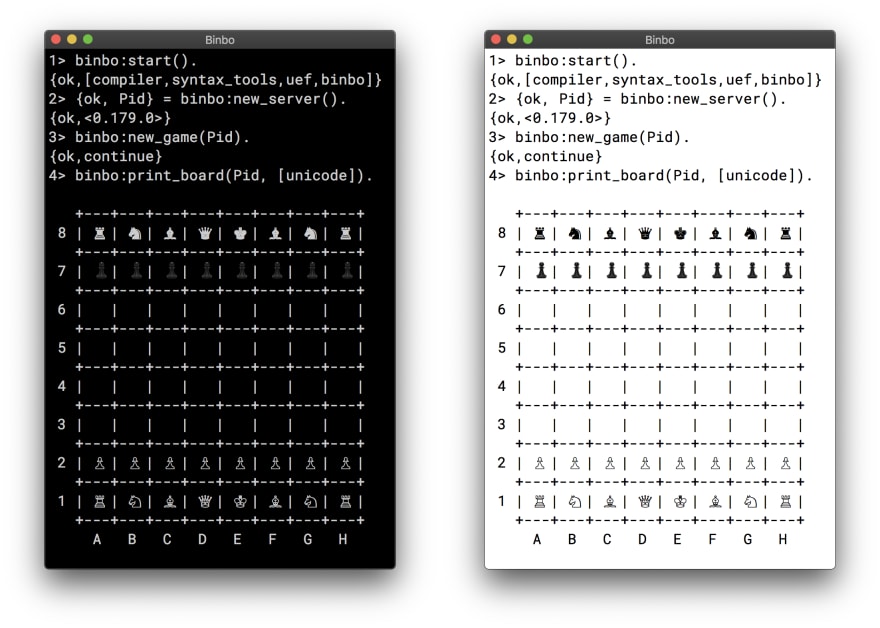 Binbo is a Chess representation written in pure Erlang using Bitboards. It is basically aimed to be used on game servers where people play chess online.

It's called Binbo because its ground is a binary board containing only zeros and ones (0 and 1) since this is the main meaning of Bitboards as an internal chessboard representation.

Note: it's not a chess engine but it could be a good starting point for it. It can play the role of a core (regarding move generation and validation) for multiple chess engines running on distributed Erlang nodes, since Binbo is an OTP application itself.

As mentioned above, Binbo uses Magic Bitboards, the fastest solution for move generation of sliding pieces (rook, bishop, and queen). Good explanations of this approach can also be found here and here.

The main problem is to find the index which is then used to lookup legal moves of sliding pieces in a preinitialized move database. The formula for the index is:

All values for magic numbers and shifts are precalculated before and stored in binbo_magic.hrl.

To be accurate, Binbo uses Fancy Magic Bitboards. It means that all moves are stored in a table of its own (individual) size for each square. In C/C++ such tables are actually two-dimensional arrays and any move can be accessed by a simple lookup:

The size of moves_from table depends on piece and square where it is placed on. For example:

There are no two-dimensional arrays in Erlang, and no global variables which could help us to get the fast access to the move tables from everywhere.

Erlang gives us the power of tuples and maps with their blazing fast lookup of elements/values by their index/key.

Since the number of squares on the chessboard is the constant value (it's always 64, right?), our global_move_table can be constructed as a tuple of 64 elements, and each element of this tuple is a map containing the key-value association as MagicIndex => Moves.

If detailed, for moves:

and then we lookup legal moves from a square, say, E4 (29th element of the tuple):

To calculate magic index we also need the attack mask for a given square. Every attack mask generated is stored in a tuple of 64 elements:

Finally, if we need to get all moves from E4:

Next, no global variables? We make them global!

How do we get the fastest access to the move tables and to the attack masks from everywhere?

ETS? No! Using ETS as a storage for static terms we get the overhead due to extra data copying during lookup.

And now we are coming to the fastest solution.

When Binbo starts up, all move tables are initialized. Once these tables (tuples, actually) initialized, they are "injected" into dynamically generated modules compiled at Binbo start. Then, to get the values, we just call a getter function (binbo_global:get/1) with the argument as the name of the corresponding dynamic module.

Using persistent_term (since OTP 21.2) for storing static data is also a good idea. But it doesn't seem to be a better way for the following reason with respect to dynamic modules. When Binbo stops, it gets them unloaded as they are not necessary anymore. It should do the similar things for persistent_term data, say, delete all unused terms to free memory. In this case we run into the issue regarding scanning the heaps in all processes.

So, using global dynamic modules with large static data seems to be more reasonable in spite of that fact that it significantly slows down the application startup due to the run-time compilation of these modules.

Once suspended, dobro will not be able to comment or publish posts until their suspension is removed.

Once unsuspended, dobro will be able to comment and publish posts again.

Once unpublished, all posts by dobro will become hidden and only accessible to themselves.

If dobro is not suspended, they can still re-publish their posts from their dashboard.

Once unpublished, this post will become invisible to the public and only accessible to Sergei Semichev.

Thanks for keeping DEV Community safe. Here is what you can do to flag dobro:

Unflagging dobro will restore default visibility to their posts.