Post from my blog. If you're enjoying the series, please consider buying me a coffee.

Setting up the database

Now that we have set up a very primitive stateless server, the next step in any regular tutorial would be to store the state in memory and do some interactions with html. That way it looks like you're getting results faster. But no! This is Haskell for madmen, not Python for fools!

We will use a database, which is most likely what you'll want to be doing in a production setting anyway. Docker lets us run a PostgreSQL instance in a container. Create <project root>/db/Dockerfile with the following:

Obviously we wouldn't usually put credentials in our code but we'll do so for now. Going over the right ways to store credentials is boring and out of scope of this tutorial. Generally though, you should consider anything that ever touched the code base to have leaked.

We need to do a few things to use our database and connect to it.

First, we'll need to create a new docker network. Note that you need to be root to call docker.

To remove the network again once you're done with it, use

Then, we'll need to build the database image:

Finally, we run the image once to launch the database and once more to launch psql.

Type in the password you set as environment variable (Why-are-you-putting-credentials-in-your-code?-You-absolute-potato! if you copied the code above verbatim), and you're in!

Manually connecting to PostgreSQL is not what we wanted. So let's go back to Hackage and find a PostgreSQL library. We'll be using hasql, version 1.3.0.6 in my case. Unfortunately Hasql does not follow semver and 1.4 is not compatible with the code below.

You will need to install the postgres development library to use hasql. How you do that will vary between operating system. En Debian-based systems you will need the libpq-dev package. For our CI pipeline we will need to add the following to .gitlab-ci.yml:

You could build and run your entire project inside a docker container and add the library there, much like we're doing in CI. I haven't done so because this is not a docker tutorial and I would like to keep non-Haskell stuff to a minimum.

If you're not going to run your Haskell code in a container, we'll need to expose the port of our database, which requires stopping the container that's already running.

If you already have an application listening on port 5432 you'll need to use a different input port in -p <input port>:5432.

You might want to stack build right after adding the dependency, as this one will take a while.

Finally back to Haskell, let's look in the Connection module and import it:

We find the functions:

So it looks like we're going to have to declare settings before we can make a connection. We know ByteString already, but what is a Word16? The Hasql documentation tells us this should be a port. Clicking through to the documentation of Word16 tells us it's a 16-bit integer that's an instances a bunch of classes. If we search through the classes it implements, we will find Num with the interesting function fromInteger :: Integer -> Word16. We can use that!

You may have realized fromInteger would have a type signature Integer -> a in the class declaration. So how does Haskell know what type we actually want to get? In this case, it knows Hasql.Connection.settings needs a Word16, so it tries to solve the type constraints and manages to do so unambiguously. In some rare cases though, it might not be able to infer what type you actually want to use. For instance, we might write show $ fromInteger 42, but the output of fromInteger and input of show might be any instance of both Num and Show! In such cases, we need to provide the type explicitly: show $ (fromInteger 42 :: Word16)

Now we know enough to put together our connection code (leaving the database field blank for now).

stack run and you should see the message Acquired connection!.

We will need to populate the database to query anything. Create an init file db/docker-entrypoint-initdb.d/init.sql with the following content:

Usually we'd create proper indices, but this will do for our current requirements.

We'll also need to add the init file in our db/Dockerfile:

And stop, remove, rebuild and restart the database container:

The base image we've used for our dockerfile will run any scripts in finds in ./docker-entrypoint-initdb.d/ at startup.

Feel free to use psql to check the content of the database if you wish.

The inner workings of Hasql are a wee bit complicated if you're not used to thinking with functors yet. You could try to figure it out yourself, but I expect this is still a bit too complicated if this tutorial is your first introduction to Haskell's type classes. So here's what we can work with:

Using Hasql.Session.statement we can create a Hasql.Session.Session from a Statement and input parameters for said statement. We can then use Hasql.Session.run with a Connection, which we already got in the code above, to get an IO action.

Think of it like this: a Statement tells us how to make a query, a Session is a query, and using a Connection we can run the query, which is an IO action.

We will need a few imports:

Let's start at the bottom and make a Statement that takes no arguments and returns out todo list of type [Task]. Remember that there's no such thing in Haskell as no arguments, we use () (unit) instead.

The first argument to the Statement constructor is an SQL string, with input parameters replaced by $<number>. The second is an encoder. The encoder will turn out custom types into types that Hasql knows how to place in tables. Then we'll need to pass an encoder, which does the opposite of an encoder. Finally we need to pass whether the statement should be prepared.

Let's postpone the creation of a decoder for a minute, and create our statement and session:

With our mental cache cleared, let's focus entirely on the decoder.
A Result decoder converters the entire result of an SQL query to a certain type. It is defined in terms of Row decoders.
A Row decoder on the other hand will convert a single row. It is defined with Column decoders.
Finally, a Column is a Value decoder with known nullability.

All our decoders are Functors (check the docs under "Instances"). This means that if we have a value of type decoder a and a function a -> b we can get a decoder b by using fmap. That's useful for turning the BOOLEAN in SQL to a TaskStatus in our program:

Similarly, Hasql has a Value Text encoder but not a Value String. The implementation of sting String is now widely considered to have been a mistake, but it's still in the default prelude and many libraries use it, Text is an improvement upon String. To convert Text to String, we'll need the text package. Import Data.Text and use unpack, you should know the procedure by now.

But we still need to apply the Task constructor over the task description and status. Value gives us nothing to do that! Indeed, a Value a only concerns itself with a single column, whereas a Task is stored across multiple columns. So we must create a decoder for a row instead. First we create row decoders from our value decoders:

Now Row is an instance of Applicative! Although functors allow us to use fmap to get

so we can do fmap Task stringDecoder_row <*> taskStatusDecoder_row! We can improve readability using the <$> operator:

Using rowList :: Row a -> Result [a] we can now easily create the result decoder we'd wanted.

Finally, we modify our top level functions to fetch the information from the right database when we connect to the server. I've renamed connectToDB to fetchFromDB. 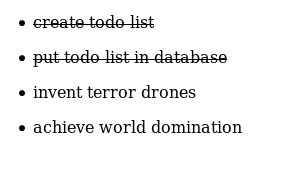 The output does not look like much for the amount of work we put in. I will discuss this issue next chapter, along with some other reflections and cleanup.

Final code for this chapter

The simplest guide to error handling in Rust

Binding multiple values together in Vue.js

Once suspended, drbearhands will not be able to comment or publish posts until their suspension is removed.

Once unsuspended, drbearhands will be able to comment and publish posts again.

Once unpublished, all posts by drbearhands will become hidden and only accessible to themselves.

If drbearhands is not suspended, they can still re-publish their posts from their dashboard.

Once unpublished, this post will become invisible to the public and only accessible to DrBearhands.

Thanks for keeping DEV Community 👩‍💻👨‍💻 safe. Here is what you can do to flag drbearhands:

Unflagging drbearhands will restore default visibility to their posts.