Post from my blog. If you're enjoying the series, please consider buying me a coffee.

Now that we have a very basic webserver, we must decide what it is we actually want to create to proceed any further. On request by David Wickes I decided to make a "todo-mvp" for the purpose of this tutorial. We won't be following the specifications exactly because there are things I want to discuss beyond what makes sense for a todo-mvp.

First, let's create the data-type that will hold the todo list's information. We need a list of tasks, each task must have a state; "done" or "not done". Let's first create a type to differentiate between "done" and "not done". And no, we won't be using a boolean. Haskell lets us be more specific than that.

This creates a type called TaskStatus, which is inhabited by Done and NotDone.
We can use our TaskStatus in the definition of a Task:

The first Task is the type name, the second Task is the constructor name. Done and NotDone are also constructors, they just don't take any arguments. The Task constructor, on the other hand, requires a String and a TaskStatus as an argument. A constructor can be used as a function, so we can create a value of type Task like so:

When defining a type with only one constructor, it is common for the type's name and the constructor name to be the same. Since types and terms can't occur in the same place, the compiler will have no trouble figuring out which one we mean.

We can also create types as records:

this can be useful to name the fields of your type, but I won't go into records yet.

Finally, we want to have a list of tasks:

List is also a monad. We get return by putting a single element in a list, fmap by map and we can get >>= using concatenation concat :: [[a]] -> [a] by doing an fmap followed by a concat. Many other data structures are monads too.

We'll want to send our todo list as HTML, so we must make a function to convert [Task] into HTML. Let's start with a conversion function for a single task:

What's going on here? We're using a case expression. A case expression is similar to a switch in imperative programming; it evaluates a different expression based on the value of a variable. Rather than matching an exact value though, we match on patters. The pattern NotDone matches a TaskStatus created with the NotDone constructor. Similarly, the pattern Task description status matches any value of type Task created with the Task constructor. In that case description and status would bind to the first and second argument of the constructor, and we could use them on the right side of the arrow.

++ is the string concatenation operation.

Oh, and Haskell is indentation-sensitive.

Finally, let's make a function that turns our snippets of HTML into a web page.

Run stack build to ensure you have no type errors.

But there's a problem, the responseLBS function from last chapter only accepts a lazy ByteString, whereas here we have a String. So what is the difference? A String is a list of Chars, whereas a ByteString is an array of bytes. A Char is a representation of unicode code point, a byte is (generally) 8 bits with no meaning attached to it.

So what is the distinction between a lazy and a strict ByteString? Isn't everything in Haskell lazy? Well, this is a different sort of lazy. A strict ByteString is a single vector of bytes. But because Haskell is pure, we cannot mutate it. That means that if we need to change or append 1 byte, we have to deep copy everything else in the ByteString. A lazy ByteString consists of multiple vectors of bytes, so we can copy references to the parts that didn't change.

So, how do we change a list of code points into a sequence of bytes? We have to specify the right encoding. We could use the Data.ByteString.Lazy.Char8 module that comes with the bytestring package, but the documentations tells us "all Chars will be truncated to 8 bits", which is not what we want! HTML supports more than just ASCII characters.

Visit hoogle.haskell.org and search for "String -> ByteString". These are the results I get: 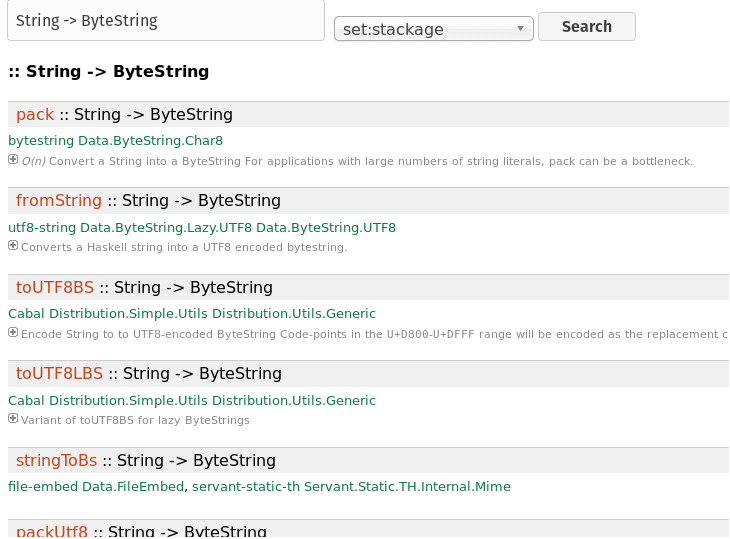 Add the right version of utf8-string under dependencies in package.yaml. My dependencies now look like this (you may have different versions):

Now, we can change our requestHandler to send a task as response:

Now you can stack run to start your server and navigate to http://localhost:8080 to see a rather disappointing website.

Okay, so we can now send a single Task as an HTML element, but we want to send more than just that! We need to be able to at least convert a list of tasks to HTML and possibly other stuff too. We want different types to be able to have similar functions available, and be able to write code based on those functions, rather than for each individual type. Enter typeclasses! A typeclass defines a set of functions that must be available for a type for it to be considered a member of that class.

For instance, for our toHTML function, we might make an HTML class:

Here we create a class HTML, we use a as a placeholder for the yet unknown type, and declare that a member of the class HTML must specify a function called toHTML with type signature a -> String (where a will be replaced by the type in question).

We can declare that Task is an instance of the HTML class:

By providing an implementation of the requirements for being a member of the HTML class, we have essentially proven that Task is a member of HTML.

We can do something similar for lists:

There is a lot of new stuff in there, so let's look at it bit by bit.

What is this weird => arrow? Well it's a sort of restriction to the type signature that comes after it. instance HTML a => HTML [a] is saying that [a] is an instance of the HTML class, but only if the variable type a is as well. So a [Task] is an instance of HTML, because Task is, but [Char] is not, because Char is not an instance of HTML (not yet anyway). This restriction on the type variable a tells us a must follow the rules of the HTML class. Specifically, there must be a function toHTML :: a -> String, and we will be able to use that function when declaring toHTML for [a].

Similarly, in elementToListElement, HTML a tells us this function only works for instances of the HTML class, letting us use the toHTML function.

Finally, we find the functions map - which you're likely familiar with, it creates a new list by applying a function to all elements of another list - and concat, which concatenates a list of Strings into a single String.

Now, you might want to also make a String an instance of HTML. Unfortunately, you cannot do that, because String is defined as being a list of characters [Char]. We already have an instance for [a], and [Char] is also a [a]. If we were to declare:

the compiler would complain, because it is no longer clear which implementation of toHTML to use. Even if we were to remove the instance declaration for [a], it would still be illegal, as we might add it later, potentially changing the behavior of code in a completely different place. We say it violates the open world assumption. We do not know what else there is, so we are only allowed to match instances on data declarations.

But how can a String not be a data declaration? We can create aliases for existing types:

This defines the String type to be a different name for the [Char] type. If we had:

We would not have this problem. It is not a popular opinion, so take it with a grain of salt, but I personally consider type declarations to be bad style: things that are the same should be called by the same name, otherwise we're just obfuscating the types. Aliases can save you some time though, and I have used them myself, but I'm never proud of them.

There is a language extension that will let you have overlapping instances, but I do not recommend it.

We can now also change our toHTMLPage to be defined in terms of the HTML class:

And of course don't forget to change requestHandler to work with our new definition! And let's send the entire list over while we're at it.

Final code for this chapter.

Once suspended, drbearhands will not be able to comment or publish posts until their suspension is removed.

Once unsuspended, drbearhands will be able to comment and publish posts again.

Once unpublished, all posts by drbearhands will become hidden and only accessible to themselves.

If drbearhands is not suspended, they can still re-publish their posts from their dashboard.

Once unpublished, this post will become invisible to the public and only accessible to DrBearhands.

Thanks for keeping DEV Community 👩‍💻👨‍💻 safe. Here is what you can do to flag drbearhands:

Unflagging drbearhands will restore default visibility to their posts.