Abstract: In this post, I experimented with 6 different approaches for caching Docker builds in GitHub Actions to speed up the build process and compared the results. After trying out every approach, 10 times each, the results show that using GitHub Packages’ Docker registry as a build cache, as opposed to GitHub Actions’ built-in cache, yields the highest performance gain.

⚠️ Warning: This article has not been updated since its publication in April 2020. The approaches outlined here are probably out-of-date. Here are more updated takes on this issue:

Sick of waiting for builds on GitHub Actions. 😖

Unlike self-hosted runners like Jenkins, most cloud-hosted build runners are stateless, providing us with a pristine environment each run. We cannot keep files from the previous runs around; anything that needs to be persisted must be externalized.

GitHub Actions has a built-in cache to help do this. But there are many ways of creating that cache (docker save and docker load first comes to mind). Will the performance gains outweight the overhead caused by saving and loading caches? Are there more approaches other than using GitHub Action’s built-in cache? That’s what this research is about.

To conduct this experiment, I first came up with some ideas on how we might cache the built Docker image. I experimented with 8 total approaches.

This is the baseline.

This is another baseline, but with BuildKit.

Note that this method is not compatible with BuildKit as it only supports external caches located on the registry (not pulled/imported images).

Maybe we don’t need to do all that import-export work and can just cache the whole /var/lib/docker directory!

We can run a filesystem-backed Docker registry on localhost, push the built image to that registry, and cache it with actions/cache. On subsequent runs, we can pull the latest image from the localhost registry and use the pulled image with --cache-from arg.

Same as above, but with BuildKit.

There is a minor difference in the setup: With BuildKit we do not have to run docker pull. BuildKit already expects the cached image to be located on a registry. While this may seem like a limitation, but it also comes with a performance gain: if a cache turns out to be not applicable, BuildKit will skip pulling the image.

GitHub provides a package registry already, so we might not need to run our own filesystem-backed registry at all!

Same as above, but with BuildKit.

When optimizing builds, although we can reduce the time to run docker build 🤩, but unfortunately some overhead will be introduced 😞.

For this experiment, we want to have an image that’s large enough, such that both the build time and overhead become apparent in our measurements.

This resulted in this Dockerfile which generates a somewhat bloated image 🤪:

I created a GitHub Actions workflow which runs all the approaches. I ran them 20 times.

After that, the results for each approach and scenario will be averaged together.

There are few exceptions:

After all the builds are run, I used the GitHub Actions API to retrieve the timing for each step. I threw the results into Google Sheets, ran some PivotTable, and summarized the results.

You can see that just using BuildKit without any cache gives some performance gain. One whole minute saved.

The cache size is 846 MB. It turns out that docker save is very slow. So, uploading that tarball into the cache also takes a long time. 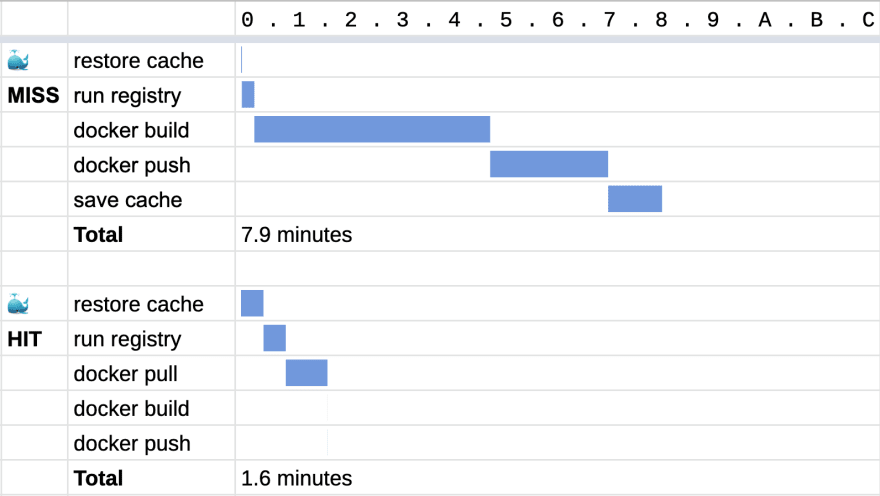 The cache size is 855 MB. It turns out that doing a docker push to a filesystem-backed registry, running in localhost, inside Docker, turned out to be faster than docker save. The same is true for docker pull vs docker load.

🐋 The local registry, with BuildKit 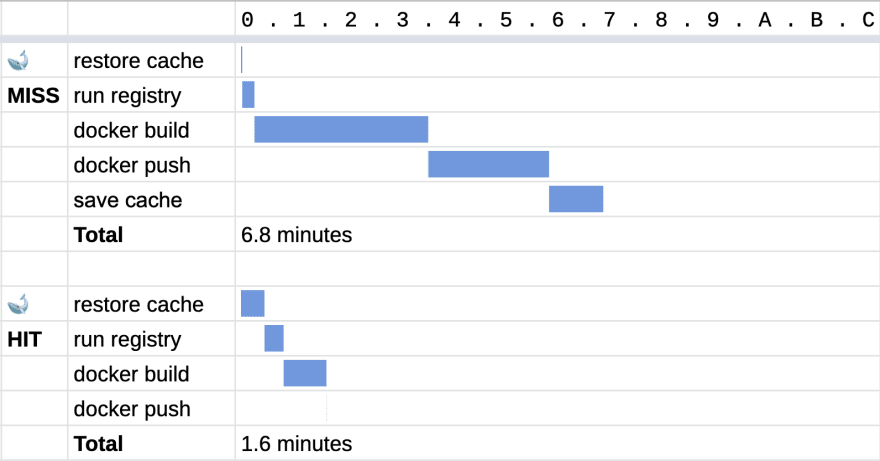 The cache size is 855 MB. When you run docker build, BuildKit pulls the image from the local registry, so there is no separate docker pull step, compared to the approach 🐳.

Although we cannot take advantage of BuildKit, using an external registry means that builds can be cached on a layer-by-layer basis. Out of all approaches I’ve tried, this approach gives the best result. 🏆

However, you also get a “build-cache” package listed in your repository’s published packages. 😂

An example closer to real world

To test out the potential gain, I tried running docker-compose build on DEV Community’s repository. Without any caching, building the web image took 9 minutes and 5 seconds. Using GitHub Package Registry as a cache, the time to build the image has reduced to 37 seconds.

You can find the code implementing each of these approaches here:

When it comes to build performance improvement, there are many articles, each recommending different approaches using different examples. It’s hard to see how each approach fares against one another.

While working on this, I also noticed trying other different approaches together gives way to more novel approaches being discovered. For example, had I not tried out Approach 🐳 (local Docker registry), I wouldn’t have thought “Oh! GitHub Package Registry is a thing! Can I use that and skip Action’s cache entirely? Let’s try!” and came up with Approach 🐙.

So, I’d say this is the kind of article I wish existed when I wanted to set up a CI workflow with Docker. I wish we have more showdowns for more approaches and more tools.