Yesterday, annoyed by the hundredth message telling me there was an update available for my mac.

I hate so much the notification numbers in my dock, and even more, the box that keeps appearing on the right top corner asking me when it should update: 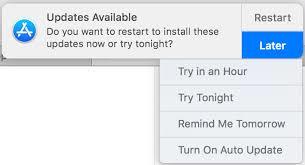 Where is the option "Stop annoying me, I will update whenever the fuck I want"?

So, I decided to update to Catalina. I did that already for my Mac at home, and the one in office, so I decided to do that for the laptop I was given for remote work.
Of course, it took more than half an hour, but I planned that in the evening so everything went smoothly.

What I forgot was that after the update, I got errors with GIT and had to run a bunch of commands to fix them.
Since I found myself googling the solution every time, I leave them here for reference.

Basically, your IDE will inform you the path to git is invalid, and if you try using git from command line you will get this error:

To fix it, you just have to update Xcode toolkit, therefore, just run

( If that does not work, you probably have to update/remove-reinstall a Xcode at all - now that I am writing, I remember I struggled a bit more few months ago with the old mac at work)

After that Git will work.
But now every time you try to git push/pull you are requested the passphrase for key. Pretty annoying.

To save it in your KeyChain and avoid having to type your SSH Key passphrase all the times, or every time you restart ( Iterm or the Mac) run: