In a few months, I will have been a professional software developer for four years. It has been fun, challenging, marvelous, exhausting, and an incredible learning journey. It has contained much that I wouldn't have chosen and an astonishing amount of positive surprises.

In Finland, of software developers, about 10% are women. (Source: Yle.fi, unfortunately only in Finnish). The exact amount of female developers, of course, varies from company to company, but in the big picture, we are a minority. Important programs, such as Mimmit Koodaa, are working to change that, but it takes time to improve these numbers.

In this blog post, I will share some learnings from the perspective of a female developer. These opinions are my own and are my experience. I'm happy if you haven't encountered anything negative in your career, but please, do respect the fact that not all of us are so lucky.

In 2018, Dan Abramov, one of the core developers in React, tweeted a blog post he had written about things he doesn't know:

📝 New on Overreacted: Things I Don’t Know as of 2018. We can admit our knowledge gaps without devaluing our expertise. overreacted.io/things-i-dont-…

It was circulating in my networks, and many felt that it was a reassuring piece of knowledge. Someone, who's been seen as a great expert, admits that he does not know some things that others might think of as very simple!

This realization has helped me in the evergoing fight with impostor syndrome. I don't know everything, but I don't even have to. I keep learning every day.

In Interviews Everybody Lies - Usually Unintentionally

During these years, I have gone through many interview processes. I've realized that interviewers give a more rosy picture of the company than it actually is. This is about selling the company to the candidate. In most cases, this is done purely unintentionally and without any evil purposes.

It is possible interviewers don't have a truthful image of the company's situation. They may be selling an idea they would like the company to be like. This can be about the work environment, the clients, the projects, or any other thing.

So, a piece of advice: Always be skeptical about what the company promises. Ask questions, ask for proof if the thing they promise is significant for you.

Of course, something unforeseen can happen. Last year alone has proven that. Some things that were promised can change when something unexpected happens. But then again, those unexpected situations reveal a lot about how much the company respects its employees. By this, I mean that hard times uncover the company's true values.

There is Always Someone with a Gender-Bias

I have been lucky to work with people who don't underestimate me because I'm not a man. I would say that most of the colleagues have been incredible in this matter.

However, as you might have guessed from the title, there have been people who see me as being less competent because I'm a woman. I think nobody has said this straight to my face, but the bias has been pretty evident from how they talk.

Example: There was a group conversation in which the topic was something I was really good at, and everybody knew it. Next to me was standing another developer, let's call him developer A. Third developer, B, needed help with the subject. The fourth developer, C, instantly said that A is the best one for this. The truth was that I knew the most about that subject (and the fourth developer knew this), but his bias made him forget about my experience.

I have to give credits to developer A in that case - he brought up that he's not actually the expert here, but I am. It was essential for me that someone called this out. You might think that this is nothing, but let me tell you, it is. Seeing someone as being less competent because of some characteristic instead of the actual competence is the core of discrimination.

The funny thing is that I've heard the words "I have no bias towards women in tech" only from people who have, with their actions, made it clear that they do.

As said before, I've been in many interview processes. I've noticed about the technical interviews that they are as far from the actual job as they ever could be. Let's take the example of whiteboard code solving puzzles. Do you ever do that in your daily job? I haven't.

Some say that it is a good test for how the candidate performs under pressure. I don't think so. This approach feels a bit like dropping someone in the middle of woods without any tools and then saying "good luck." Jobs I've had have not been like that. 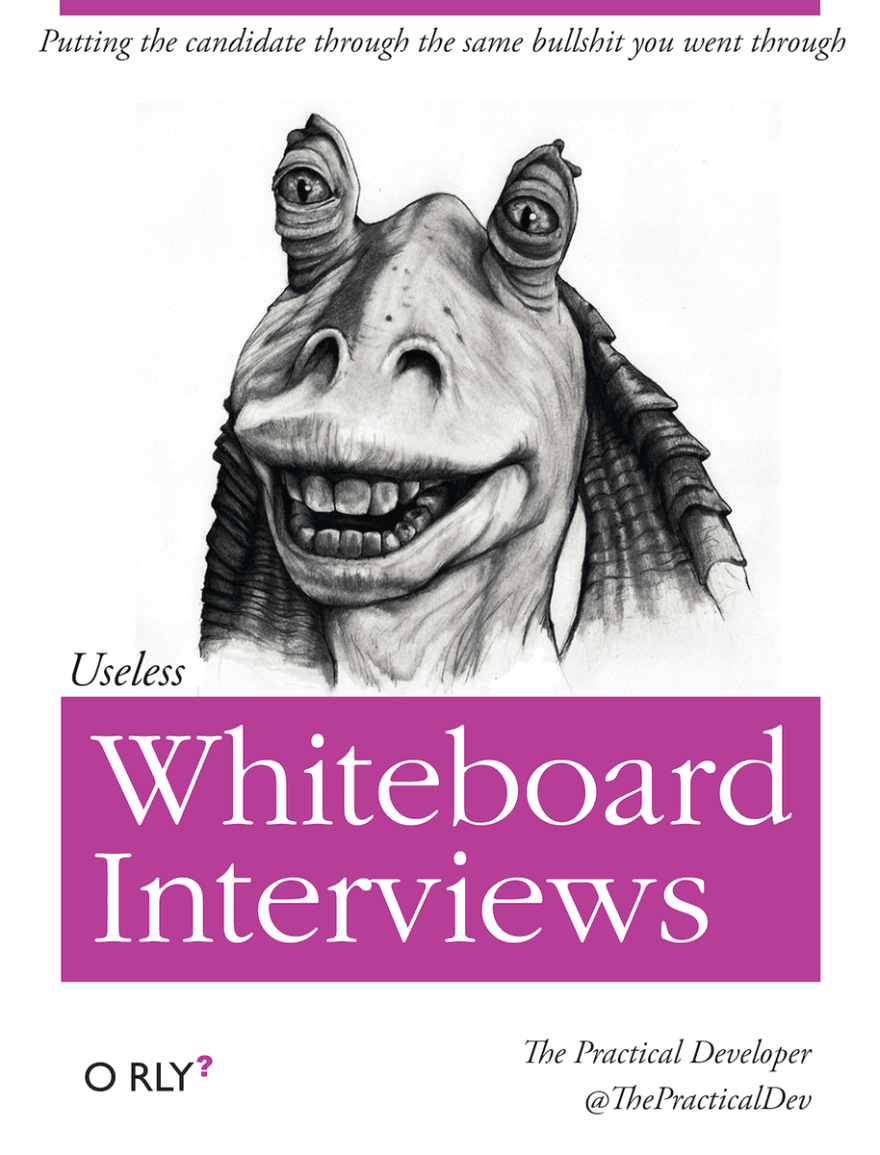 How to make the hiring process as arbitrary and subject to bias as possible.

Also, putting the candidate through a tech grill is not a good approach. Again, you could say something about the stress test and that people know their stuff even when grilled if they're professionals. Well, how many times those interviewers use search engines throughout the day? Shouldn't they know their stuff, right?

Stressful situations make many people freeze, and they can't show how good they actually are. In the actual job, it is a rare occasion when someone asks questions in the same way as in those tech grill interviews.

My favorite kind of technical interview has been one where I showed some code I had written. That was some free time code, so not a task for the interview process. It was a starting point for conversations, and interviewers asked me questions based on that. I knew the code inside out, and it was so much easier to just have a conversation without all the time fearing that I might answer wrong.

When I started learning to code, I was alone. I lived in a city where there were no developer communities. The closest town with meetups was something like 100 km away. The communities online (like Stack Overflow) felt hostile, so I didn't feel like being part of them either. So when I moved to Helsinki because of my first developer job, I was thrilled about all the possible meetups and other events.

In these four years, I've gotten to know quite a few people from various workplaces I've been in. Another critical community for me has been LevelUp Koodarit - a Facebook group and Slack-space for women and gender minorities.

People I've gotten to know through these communities are fantastic, and I'm super happy about the connections I've made. They've also been a support group and door opener for many things - be it public speaking, blogging, or hosting a study group about accessibility. And for job opportunities.

So, the last almost four years have been a journey. There have been ups, and there have been downs. I've seen a lot and learned even more. There is still a lot of work to do for equal treatment in the tech industry, especially for those who are more in the margins than I am.

I hope you learned something from these points, and if you have any similar experiences, I'd love to hear them! 😊

Were you ever fired as a junior developer? What’s your story?

The Most Fun We've Ever Had Coding! 🎙