While I'm developing (or just while I'm commuting to work) I usually love to hear some rock music.

I created some playlists on Spotify, but lately I'm stick to the same playlist, containing my favorite "Indie Rock" songs.
This playlist is made up of more or less 45 songs I discovered through the years in several ways.

Since I was starting to get bored about always listening to the same songs, last weekend I decided to analyze my playlist using Spotify APIs in order to discover insights and hopefully to find some new tunes I could add.

Here's what I did in more or less 300 lines of Python 3 code (boilerplate included).
You can find on github a Jupyter notebook with the code I used.

For my analysis I set up a Python 3 virtual environment with the following libraries:

In order to access the Spotify APIs I registered my app and then I provided the spotipy library with the client_id, the client_secret and a redirect url.

After a first API call to get my playlist id, I got all the tracks of my playlist with another API call along with some basic information like: song id, song name, artist id, artist name, album name, song popularity.

With another API call I got some extra information about the artists in my playlist, like genres and artist_popularity.

Finally with another API call I got some insightful information about my tracks:

The results of all these calls have been put inside Pandas dataframes in order to simplify the data analysis and then merged in a single dataframe using artist IDs and track IDs.
Some values (like song/artist popularity and tempo) have been normalized.

After ensuring that the artists in my playlist all contain "Indie Rock" as genre, I saw (using shape, info and describe of the full dataframe) that my playlist consisted of 46 entries, containing all non-null values with these statistics:

Then I created some charts (distplot, countplot, boxplot) using Seaborn:

All these graphs show that I like songs with low acousticness/instrumentalness/speechiness, high energy/loudness/tempo, high artist popularity and duration of more or less 200 seconds.
Valence and song popularity span on a wide range, meaning that I have in my playlist both well-known and unknown songs, and both positive and negative ones.

But how my playlist compare against the Indie Rock genre?

Comparing my playlist with a sample of the genre

I used some calls to the search API with 'genre:"Indie Rock"' as a keyword and 'type=tracks' to get a sample of the Indie Rock genre (5000 songs in total).
This API offers also some nice keywords like 'tag:hipster' (to get only albums with the lowest 10% popularity) or 'year:1980-2020' (to get only tracks released in a specific year range).

Then I repeated the same analysis on both my current playlist and the Indie Rock sample and I got the following charts: 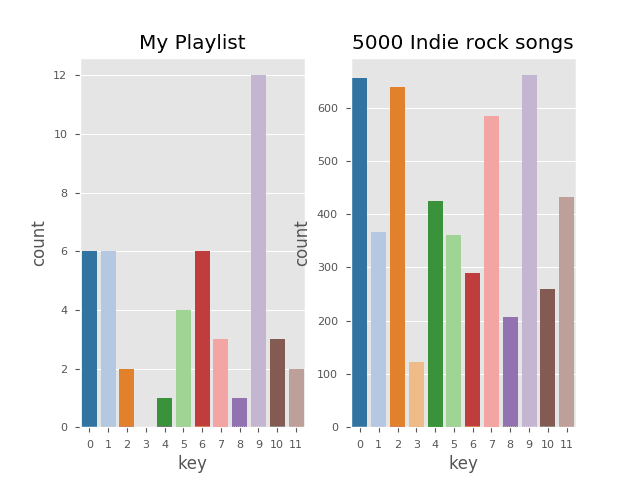 The graphs show that my playlist differs from the 5000 Indie Rock songs because:

The boxplot confirms the same insights and I agree with the outcome of this analysis.

Creating a new playlist with songs I potentially like

Using these insights, I applied some filters to the 5000 songs dataframe in order to keep only tracks I potentially like; for each step I logged the dropped songs to double check the filter behavior.

The first filter I applied was removing songs I already had in my original playlist, obviously.

The other filters were:

After a few days listening to the new playlist, I'm quite happy with the results and I'm already promoting some tracks to my original playlist.

This "recommendation" method is really simple and probably works well only in this specific use case (i.e. it's a well definable subset of a specific genre).
The standard recommendation method of Spotify is obviously much better because, apart from audio analysis, it uses also a mix of Collaborative Filtering models (analyzing your behavior and others’ behavior) and Natural Language Processing (NLP) models (analyzing text of the songs).

decoding html. (the pony he comes)