Starting from this, I decided to analyze some tweets from pretty popular Python devs in order to understand a priori how they use Twitter, what they tweet about and what I can gather using data from Twitter APIs only.
Obviously you can apply the same analysis on a different list of Twitter accounts.

For my analysis I set up a Python 3.6 virtual environment with the following main libraries:

Some extra libraries will be introduced later on, along with the explanation of the steps I did.

In order to access the Twitter APIs I registered my app and then I provided the tweepy library with the consumer_key, access_token, access_token_secret and consumer_secret.

We're now ready to get some real data from Twitter!

First of all, I chose a list of 8 popular Python devs, starting from the top 360 most-downloaded packages on PyPI and selecting some libraries I know or use daily.

I got all the data with two endpoints only:

I saved the results from the two calls in two Pandas dataframes in order to ease the data processing and then into CSV files to be used as starting point for the next steps without re-calling each time the Twitter API.

The users dataframe contained all the information I needed; I just created three more columns:

The tweets dataframe on the contrary needed some extra preprocessing.

First of all, I discovered an annoying limitation about the Twitter user timeline API: there's a maximum number of tweets that can be returned (more or less 3200 including retweets and replies). Therefore I decided to group the tweets by username and to get the oldest tweet date for each user:

Then I filtered out all the tweets before the maximum value between the first dates (2017-08-26 20:48:35).
Starting from these data, @kennethreitz is influencing the cut date because he's tweeting a lot more than some other users; but in this way we can at least get the same timeframe for all the users and compare tweets from the same period.

I finally created a new column containing the "tweet type" (standard, reply or retweet) and another column with the tweet length.

Here are some columns from the final tweets dataframe (first 5 rows):

The users dataframe itself already shows some insights:

The tweets dataframe needs instead some manipulation before we can gather some good insights.

First of all let's check the tweet "style" of each account. From the following chart we can see for example that @cournape is retweeting a lot, while @mitsuhiko is replying a lot: 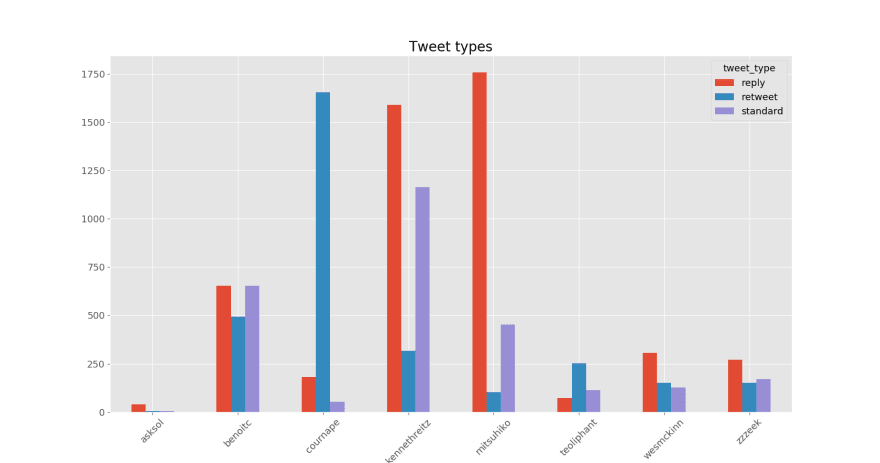 We can also group by username and tweet type, and show a chart with the mean tweet length. @kennethreitz for example writes replies shorter than standard tweets, while @teoliphant writes tweets longer than the other guys (exceeding the 140 chars limit): 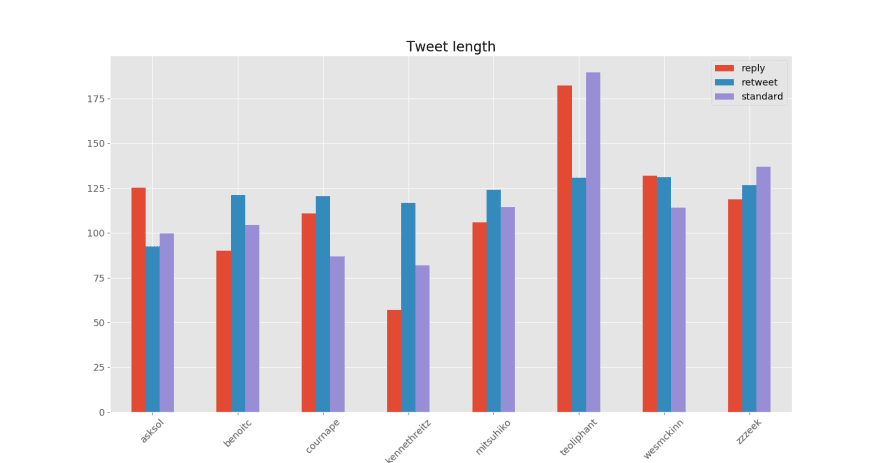 Ok, now let's filter out the retweets and let's focus on the machine-detected language used in standard tweets and replies. The five most common languages are: English, German, French, undefined and a rather weird "tagalog" (ISO 639-1 code "tl", maybe an error in auto-detection?). Most of the tweets are in English; @mitsuhiko tweets a lot in German, while @benoitrc in French: 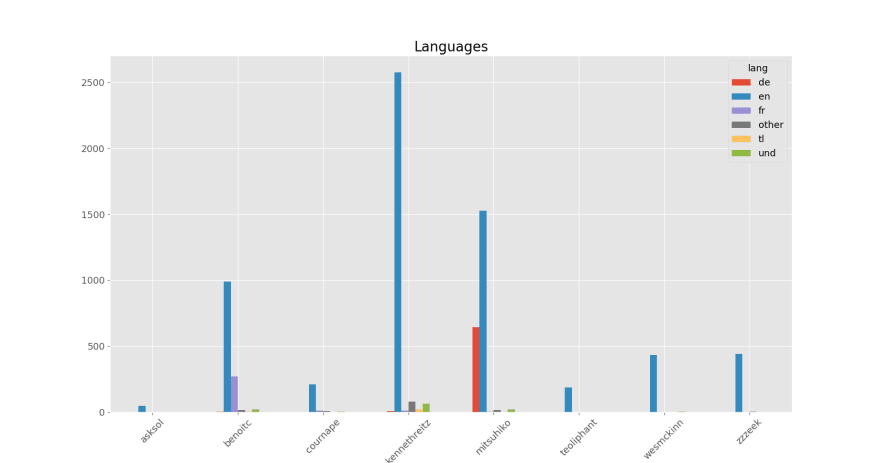 So, let's just select tweets in English or undefined: all the next charts are just considering tweets and replies in English (but obviously you can tune differently your analysis).
Let's group by username and get statistics about the number of favorites/retweets per user:

From this table we can see that:

After the normalization we can see that @cournape and @teoliphant are getting higher mean values, in terms of retweets and favorites.

We can also see how the monthly number of tweets changes over time, per user. From the following chart we can see for example that @kennethreitz tweeted a lot in september 2017 (more than 800 tweets): 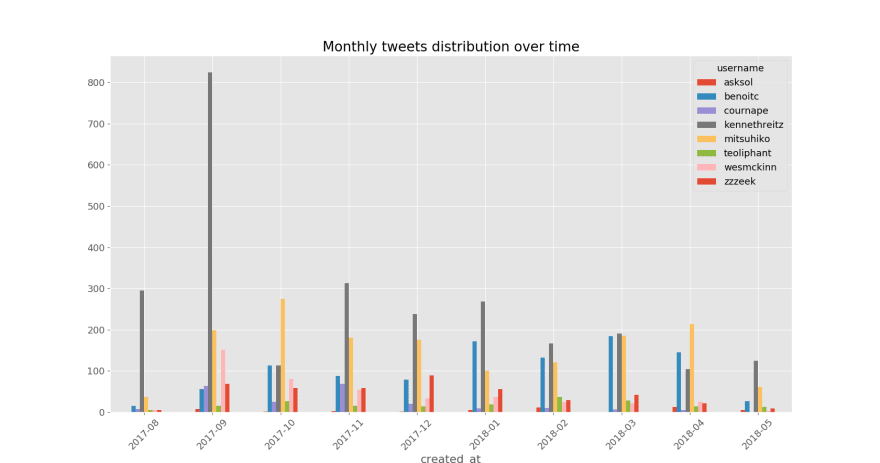 Or we can even see which tools are used the most to tweet, per user: 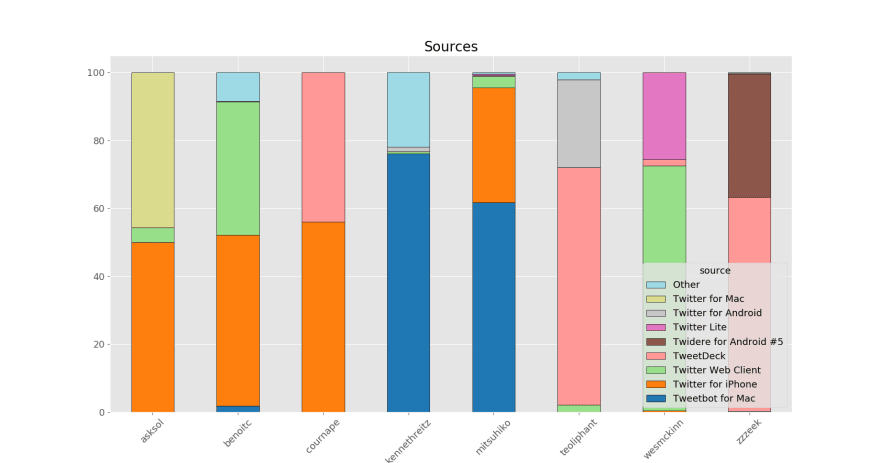 Finally, we can build a kind of punchcard chart for each user, showing an aggregation of tweets dates by day of the week and hours of the day: 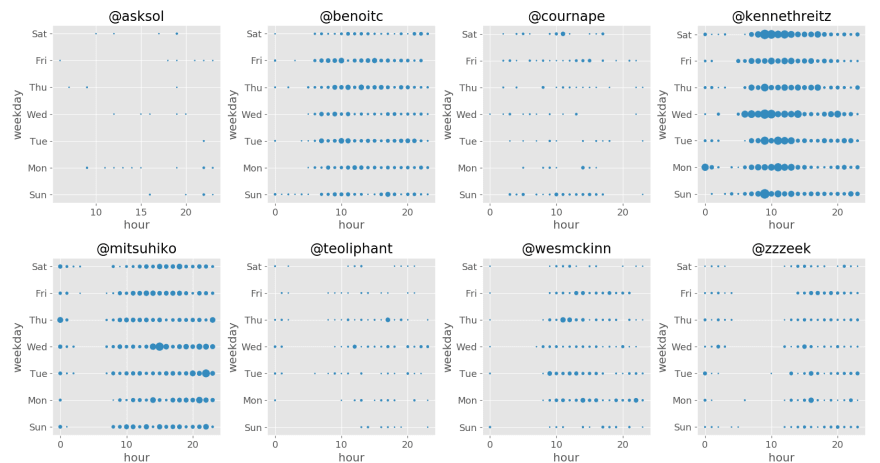 But what are the devs in the list talking about?

Let's start with a simple visualization, a word cloud.
After some basic preprocessing of the text from standard tweets only (tokenization, pos tagging, stopwords removal, bigrams, etc), I grouped the tweets by username and got the most common words for each one:

Then I created a word cloud for each username using word_cloud. All the guys are talking about Python or their libraries (like pipenv, pandas, sqlalchemy, etc); we can also spot some other programming languages like erlang and rust. 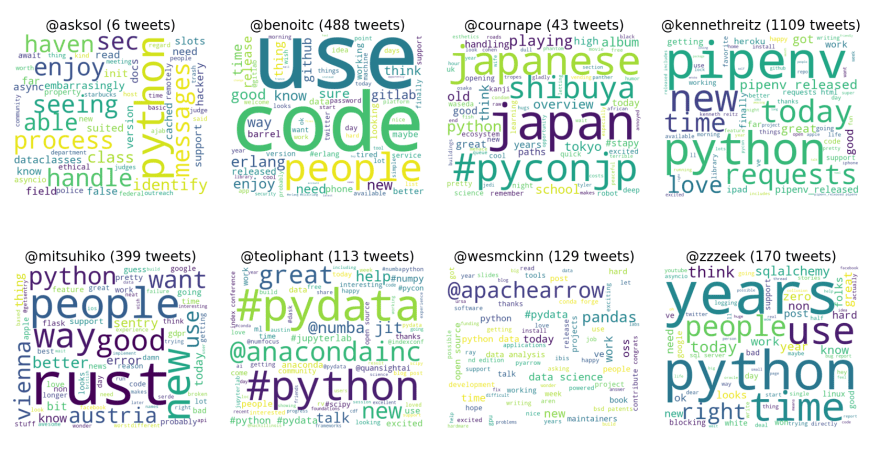 The next step is to identify real topics, using an LDAmodel from Gensim. I still used standard tweets from the two accounts with the higher number of tweets (@kennethreitz and @mitsuhiko) and I performed the same preprocessing used for wordclouds generation.
I run the model using two dynamic values:

Here are the topics:

We can check the intertopic distance map and the most relevant terms for each topic using pyLDAvis: you can explore the interactive data in the jupyter notebook in my github account. 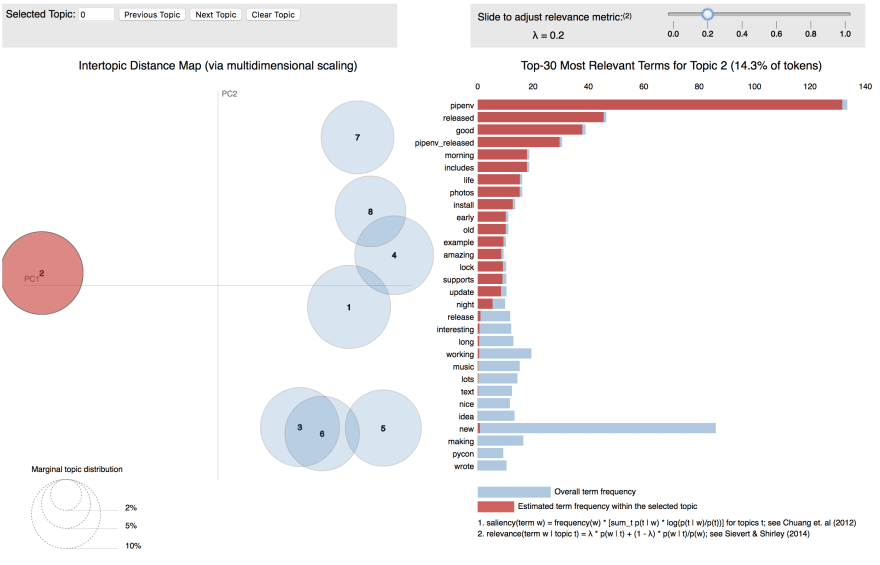 In this post I showed how to get data from Twitter APIs and how to perform some simple analysis in order to know in advance some features about an account (e.g. tweet style, statistics about tweets, topics).
Your mileage may vary depending on the initial account list and the configuration of the algorithms (especially in topics detection).

I uploaded a jupyter notebook on my github, with some snippets I used in order to create this blog post.

Use Python in your Browser Now!

Once suspended, ericbonfadini will not be able to comment or publish posts until their suspension is removed.

Once unsuspended, ericbonfadini will be able to comment and publish posts again.

Once unpublished, all posts by ericbonfadini will become hidden and only accessible to themselves.

If ericbonfadini is not suspended, they can still re-publish their posts from their dashboard.