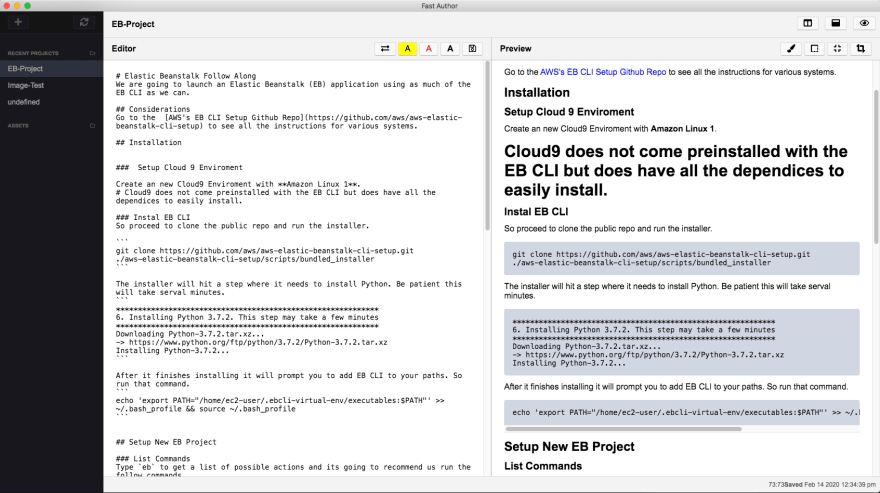 P.S I wrote this article in this editor.

I've been working on a new version of my AWS Certified Developer course which I am publishing free-to-watch on freeCodeCamp and I had finished recording all my lecture videos with only the follow alongs remaining.

Follow Alongs (some may call them labs) is where I make a video where you follow along with me to get hands-on skills with AWS.

However, producing these videos has been a bottleneck on my production because I have to back-track as I discover things on the fly which could result in me re-recording 3-4 video sections back.

So it makes sense for me to tutorialize them along the way in written format which is easier to modify.

I am feeling the pain hard here because the Developer Associate is heavy hands-on and these follow alongs need more attention and complexity than any other Certification.

Existing Editors and My Use Case

There are many markdown editors out there, but none are designed for power-users or optimized for my use case which are:

What did I build it in and how long did it take?

I built in 3 days. 2 days building, and 1 day QA with my co-founder Bayko. Today I am using it for its intended use and I already know I am going to get a 500% increase in productivity.

I already build an open-source video game called Swap-N-Pop so it was a simple as reviewing what I had done before.

Typescript would have been a better choice if I had multiple collaborators but I wanted to get this done as fast as possible and Coffeescript gives speed like no other.

This was the same path as Swap-N-Pop where when I needed test code, and more collabs I converted it from Coffeescript from Typescript.

I was going to use Svelte but I wanted to get this done, so I just rolled back to leveraging Mithril where I have solved lots of javascript *hard parts and I didn't want to tack on two extra days to development.

I hate working with ImageMagick so I opted for SharpJS which is much easier to install, but we had considerable pain getting this work with Electron. I had to find the right version of both Electron and SharpJS.

The Preview and Export

Since this is an Electron app I should be able to add my Grammarly extension to better improve my writing.

A Project of Distraction or Procrastination?

So far its been worth the detour. If I worked for another company and I proposed I could try to build a tool in a few days to save weeks they probably wouldn't let me do it since most people would see it as a distraction.

I could have completed my course in the days I built this but it's so easy to focus on the short term, and knowing when to put the time, in the long run, is a skill that requires lots of attempts at failed distractions.

I thought I pull out some code which was interesting:

I borrowed the online function to get the relative coordinates for a Canvas.

I would overlay a canvas on an image. Then I can capture the canvas as an image using the toDataURL() and the replacing the start of the string replace(/^data:image\/png;base64,/, "")

SharpJS can composite two files on top of each other which is how I am saving images.

I set global hotkeys and just watch on keydown.

All the data is stored in a Singleton. No reactive nonsense.

We are AWS Obsessed and create both free and paid learning material.
We have study material for all 10 AWS Certifications on our custom LMS platform with flashcards, white paper summaries, journey paths and exam simulator.

Once suspended, exampro will not be able to comment or publish posts until their suspension is removed.

Once unsuspended, exampro will be able to comment and publish posts again.

Once unpublished, all posts by exampro will become hidden and only accessible to themselves.

If exampro is not suspended, they can still re-publish their posts from their dashboard.

Thanks for keeping DEV Community 👩‍💻👨‍💻 safe. Here is what you can do to flag exampro:

Unflagging exampro will restore default visibility to their posts.