In the last post of code your own vue we have seen how to define reactive states and render every time a state is updated.

When I started using vue I was confused about the differences between mounted and created, if you don't know either then it is a good opportunity to show what is the difference between both hooks.

Before explaining the differences between methods, we need to know that each component or vue instance has a lifecycle.

A lifecycle in vue can be defined in different steps that initialize some functionalities, from create to mount and from mount to destroy. In the official vue's documentation we can find the next diagram about the lifecycle.

Are methods defined by the coder that are called at certain moment in the lifecycle.

These are the lifecycle hooks:

In the diagram we can see that the created hook is called after the initialization of reactivity and the render function isn't called yet.

In the constructor I added a comment of where should be called the created method.

Note: I did some changes since the last post. walkDataProps function define the reactivity of our states in this.$data and this but the implementation is almost the same of defineReactivity function of the last post. You may will see that I can write this.msg instead of this.$data.msg but I still can write the second one.

The method can be undefined so I'm using optional chaining (?.) to avoid errors, and I uses bind for pass the lost reference of Vue.

Why created should be called before of the declaration of render?

When you want append a html element through created like:

Then the render function should read that new element an replaced it to our defined state:

In Vue if you append that element after the render using mounted the append element going to not be replaced.

In practical terms that is the main different from created and mounted.

The implementation of renderVue that we have done in the last post read the Vue.$el and do a copy of that element, so when we call renderVue before calling created the appended element is going to not be copied.

The mounted hook is called after the first rendering.
In vue you can call this.$mount() to run it when you need, I implemented that method too. This is how looks my constructor after calling all those hooks.

As I explained before, appending a element with this hook is going to not be rendered, the renderVue implementation doesn't keep the appended element.

In the original Vue their implementation handle the appended element to keep in the page but will not be replaced to a state in a re-render.

so looks like in vue with the following code: 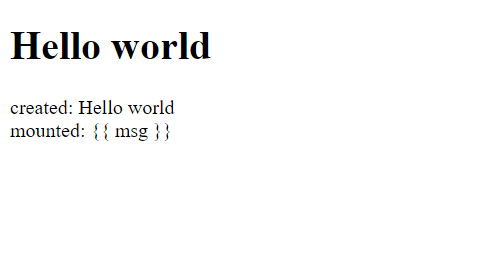 The same code but using our vue: 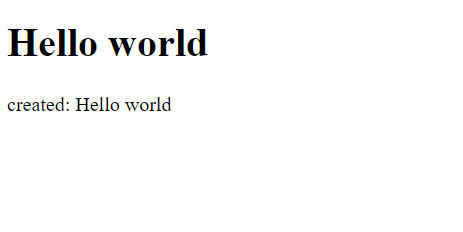 mounted: {{ msg }} dissapears after the re-render.

Now we know what is the differences of both hooks, vue have more lifecycle hooks that we can see in a future post but I think those hooks are enough for now, and after understanding this article is easy to implement others hooks.

Thats all for this post, have a happy coding.

Once suspended, ghaerdi will not be able to comment or publish posts until their suspension is removed.

Once unsuspended, ghaerdi will be able to comment and publish posts again.

Once unpublished, all posts by ghaerdi will become hidden and only accessible to themselves.

If ghaerdi is not suspended, they can still re-publish their posts from their dashboard.

Once unpublished, this post will become invisible to the public and only accessible to Gil Rudolf Härdi.

Thanks for keeping DEV Community 👩‍💻👨‍💻 safe. Here is what you can do to flag ghaerdi:

Unflagging ghaerdi will restore default visibility to their posts.