Docker is an ecosystem of services that are used to create, run and administrate containers.

In simple terms, a container is an isolated environment just for running a particular application. A container essentially contains the application along with all the dependencies and configuration files that it needs for running.

More on that later. First, let's see why do we need docker or containerization in particular.

The era of cloud computing sprung up a challenge of managing and maintaining the application over various cloud and development environments. Regardless of the underlying platform the application should remain stable and operational. But because of the 'unknown' associated with running the application on a foreign platform, possibility of environment-specific bug increases. A solution to this is to pack and ship the application along with the dependencies, configuration files and libraries that the application needs to run and operate efficiently. This process is called containerization. Which docker does brilliantly.

What is an image and a container?

More formally, an image is like a blueprint for creating a docker container.

Before we jump on to containers, let me quickly throw in some operating system related stuff.

Every running process has a bunch of hardware/software resources associated with it. When a process is running, it communicates with the kernel (core of OS that controls all the tasks of the system) to access those resources.

Each process may have different requirements for running (for instance, one app maybe using python2 and the other python3.) and because of this reasons, containers are used to isolate the environments.

A container is an isolated running instance of a process with it's own set of resources, file system and what not.

Continuing the analogy, if an image is a blueprint to create a container than in OOP reference, an image is a class and a container is an instance of that class. So essentially you can create as many containers as you want from a single image.

Getting started with docker

You'll be needing docker desktop for the tutorial down below. Docker Desktop 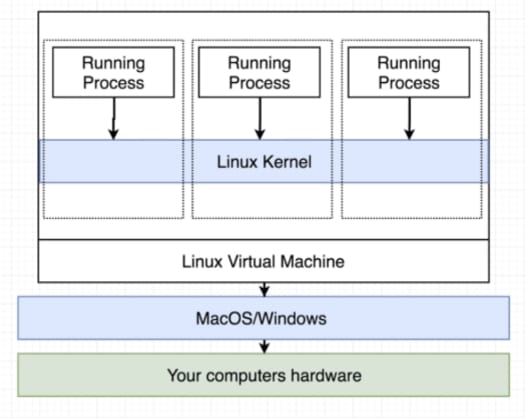 When you install docker desktop (For Mac and Windows(pro)), docker runs a Linux virtual machine behind the scenes to run something called as a 'docker server'

When the docker server is up. You can communicate with it using docker cli

docker: reference to the docker client

run: Try to create or run a container

<image_name>: Name of image to use for this container

Here are some of the commands I daily get to use.

-t → Does the formatting of the input/output in the terminal

All the docker commands

Would love to hear your thoughts.

Once suspended, holdmypotion will not be able to comment or publish posts until their suspension is removed.

Once unsuspended, holdmypotion will be able to comment and publish posts again.

Once unpublished, all posts by holdmypotion will become hidden and only accessible to themselves.

If holdmypotion is not suspended, they can still re-publish their posts from their dashboard.

Once unpublished, this post will become invisible to the public and only accessible to Rahul .

Thanks for keeping DEV Community 👩‍💻👨‍💻 safe. Here is what you can do to flag holdmypotion:

Unflagging holdmypotion will restore default visibility to their posts.