Svelte, I kept hearing the name more and more.

It's supposed to change everything

For real I said, another SPA framework?

Yea yea, this one is IT. It might topple one of the big three Angular, React, Svelte.

Of course, I'm a bit doubtful. Sure it might pick up over time or are we already there?

So what would make us throw out the framework we currently work with or add to our toolbelt?
Well, one of the first things I do is to look at GitHub and see how popular is this thing?

Did this thing come out of nothing?

Well doing some research shows it was created in 2016 and is currently on version 3. So it's been around, that's good.

Let's say we choose Svelte for our next project though, just to try things out. What should we expect from it to take it seriously?

Ok, we got a list of requirements/features that we want to investigate. But first, let's talk about how Svelte does things.

Ok, so a lot of things happen on compile. What else can you tell me?

Instead of using techniques like virtual DOM diffing, Svelte writes code that surgically updates the DOM when the state of your app changes.

Ok, so NO virtual DOM. But surgical updates, sounds exotic.

Svelte is a component framework, like React, Vue and Angular.

Ok good, we got components

There is a difference though. The mentioned frameworks use declarative state-driven code that needs to be converted into DOM operations. This comes with a cost on framerate and garbage collection.

and I guess Svelte avoids that somehow?

Svelte is different, Svelte runs at build time. Their components are turned into imperative code which gives it excellent performance.

Svelte is currently on version 3 has gone through significant change to ensure the developer experience is great and purged of most of the boilerplate code.

Developer experience, yup got to have that.

Here are some resources I think you should check out at some point, either while reading this or after.

Svelte is like the three big SPAs, Vue, React, Angular, component-oriented. So let's talk about components in Svelte.

A component in Svelte is stored in a separate file with the file ending with .svelte. It has a script part, containing your code, a style part for your styles and a markup part.

Yea, not much at all. However, looking at the resulting code this tells a different story:

That's a lot. The good news is that we DON'T have to write the above.

Note how we use interpolation with {}.

This can be used on HTML attributes as well, like so:

Additionally to placing our code in a script tag - we place our styles in a style tag, like so:

and the best part is that it's scoped to the component - it won't leak out.

You import a component by using the import keyword like so:

Wasn't that easy? You barely see that there's a framework there, just HTML, CSS and JS.

Enough of all this theory. Let's get started and build something. The easiest way to build anything with Svelte is to scaffold out a new Svelte project using the following command:

and you should see the following: 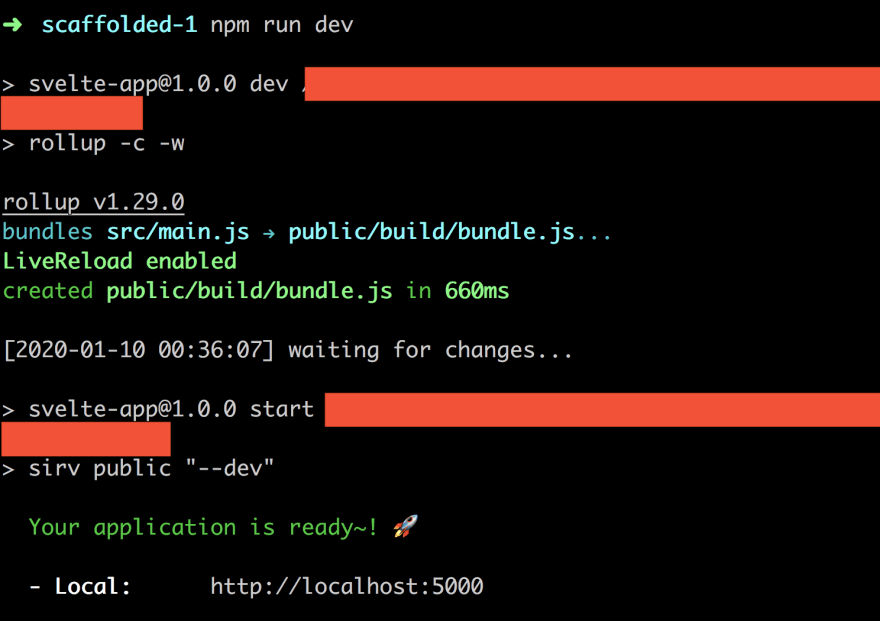 We seem to have LiveReload, nice!. 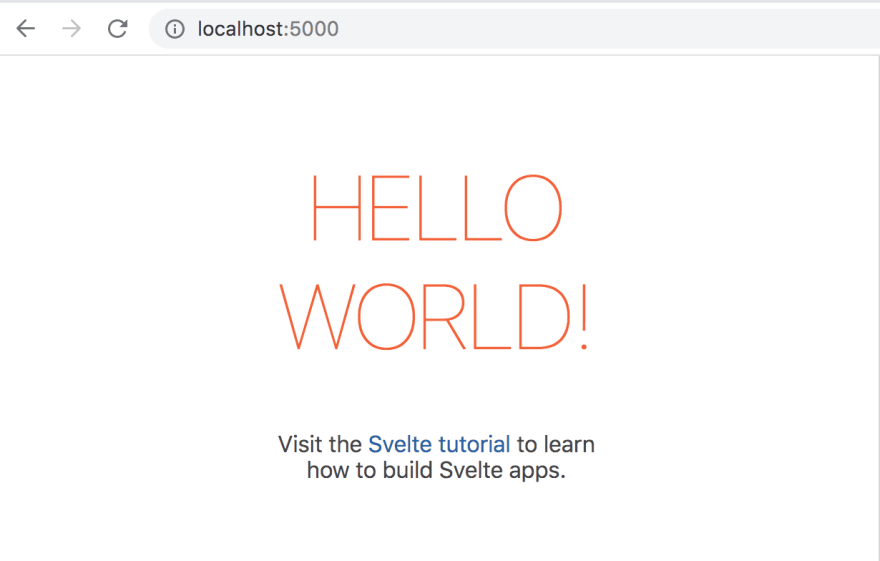 There we have it. Hello Svelte.

What about that Live Reloading? We should be able to go into our code and change a variable and see it reflected in the Browser with no start/stop of the app. 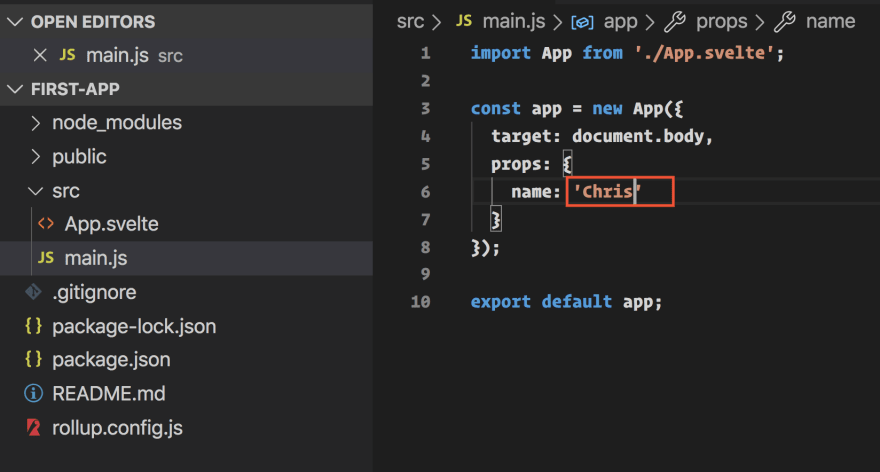 and the browser now shows: 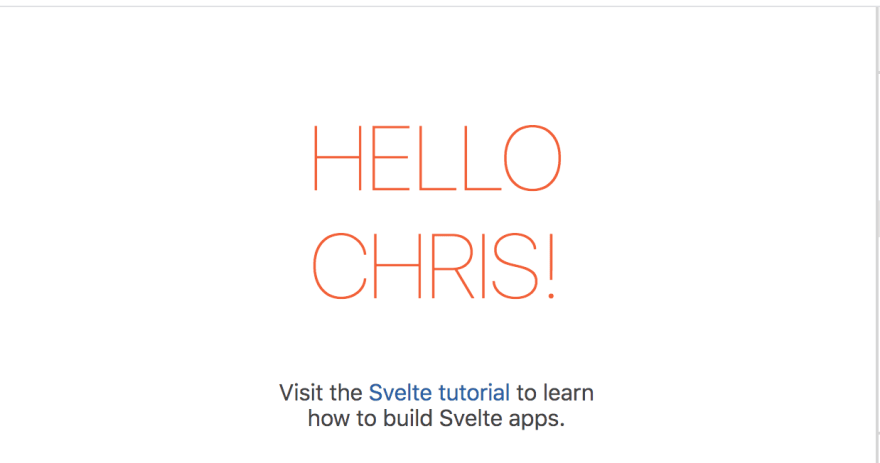 Great. That works. Yea I feel a little spoiled wanting live reload to work. I remember starting out with JS and not having this.

Good thing it's a must nowadays :)

Ok, we have a project, let's keep working with it by creating our first component and learn a few tricks like how to render data and how to work with properties or props as they are called.

Let's create a CV component by creating the file CV.svelte and give it the following content:

Now open up App.svelte cause we need to use this component by :

You need the following row for the import, place it within the script tag:

To use it we need to place it in the markup like so:

You should now see this in the browser:

Next we want to learn how to send data to our component. We do that using properties or props as they are called in Svelte. So how to use them?

Simple, use the keyword export.

Go back to your CV.svelte file and add the keyword export like so:

Now we can actively set title property from the outside. Let's open up our App.svelte file and do just that.

We define a new object in the script section:

Then we refer to it in the markup section like so:

That still seems to work in our browser, great :)

Of course we want to be able to render more complex data than a string or number. How bout a list? We can easily do that by using a construct that looks like so:

skills above is a list and skill is the name we give a specific item on the list. We need to do the following to get all this to work:

Let's start with App.svelte and update our data object to look like so:

Now let's send the entire object instead of just the title. So we change the markup in App.svelte to:

Now we open up CV.svelte and we change it to the following:

Ok, it's looking better but we should learn how to use IF, ELSE and those kinds of statements. Let's work on the skills data and render it differently depending on the level.

Let's say we want to output REALLY GOOD if the level is on 5
and GOOD if level is on 4. We can solve that using the conditional constructs in Svelte that looks like so:

An example of this is the following login component:

We can improve the above by using ELSE. The syntax for that is {:else} inside of a {#if}. Here's an example:

We can additionally use ELSE IF to express even more boolean switch logic. Just like ELSE it's using a : like so {:else if condition}. A longer example looks like so:

Let's add an entry to our skills list { name: 'Photoshop', level: 3 } and adjust our component CV.svelte to look like this:

Ok, good, we know how to work with conditionals as well.

One really cool thing in Svelte is how easy it is to work with HTTP endpoints and render the result. For this, we will use a template construct called await.

Let's talk to one of my favorite endpoints SWAPI, the Star Wars API. To be able to use our await construct we need to go about it in the following way:

Let's define a function in our component like so:

As you can see above we have pointed out our promise variable as the thing to wait for. We have also specified {:then data} as where our fetched data should be rendered and that we also give that data the name data. Finally, we specify where we render any errors with {:catch error}.

Let's add all of this to a separate component HttpDemo.svelte and have it look like so:

Running the app you should have something looking like so: 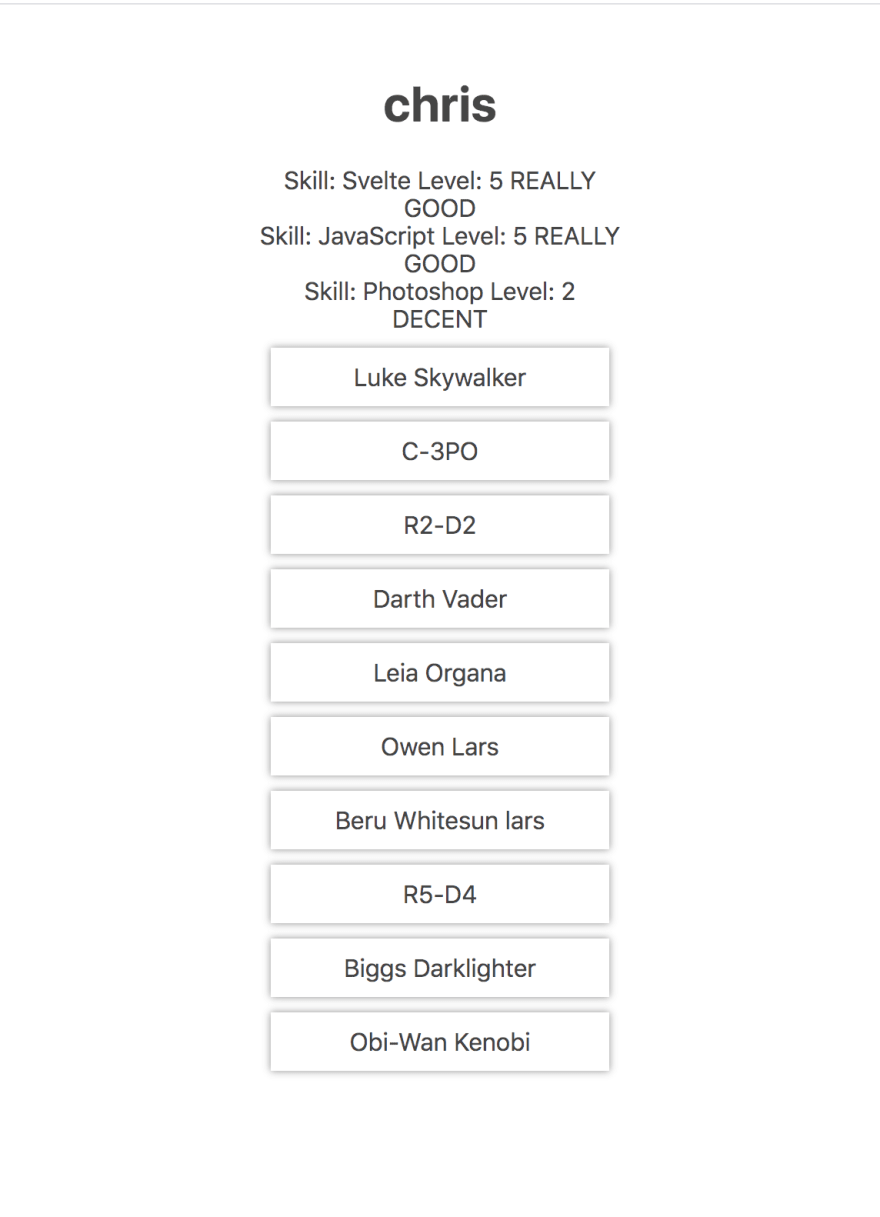 Ok, now we know a bit more how to work with different directives, how to render out data, work with HTTP and so on. What about events? Well, there are two types of events that are interesting to us:

So how do we learn these event types in the context of our app? Let's try to make our CV better by allowing data to be added to it.

Ok, to be able to add a skill we need two things

Now we need to add the following code in the script section:

Now we need to implement the method saveSkill(). It needs to raise a custom event that the parent component can listen to. We raise custom events in Svelte using createEventDispatcher like so:

Let's apply that to our current code:

Ok we know how to send a message upwards, how do we capture it?

Simple, we use the on:<nameOfCustomMessage> and assign a handler to it. Now open up the App.svelte and let's add the following code to our markup and script section:

and for our script section:

When running this you should get the following in the console: 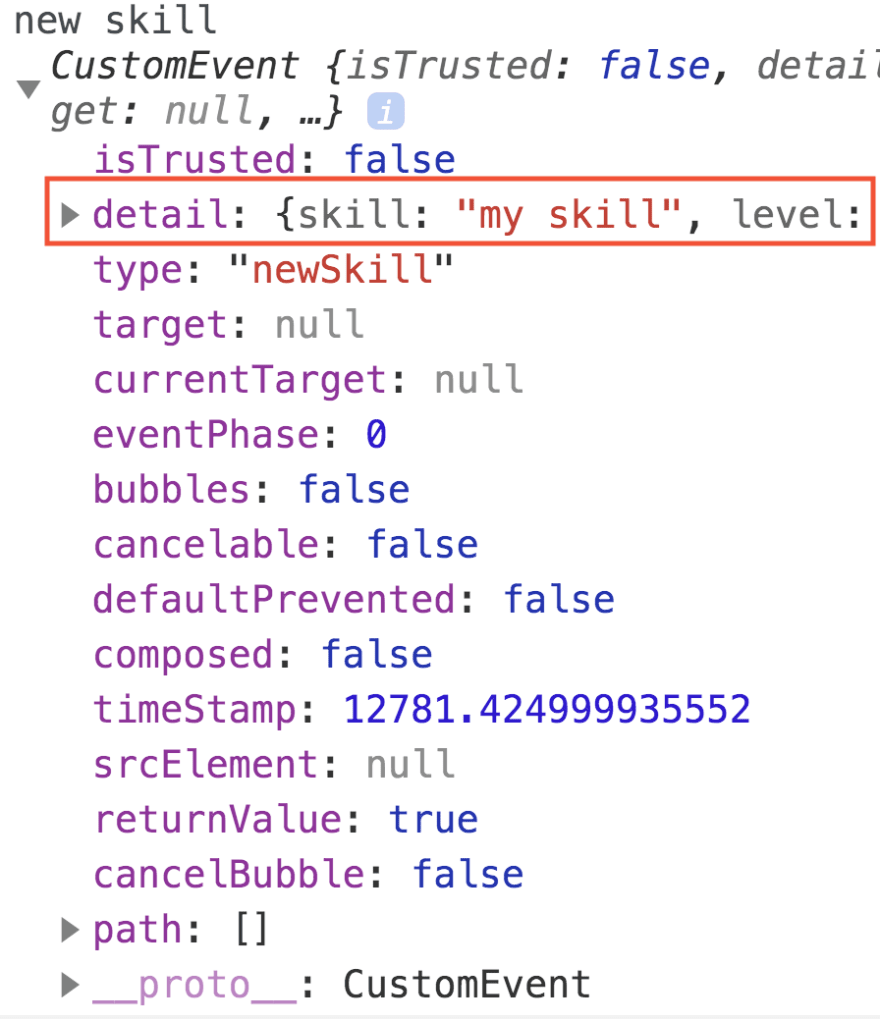 Note above how our message is in the detail property.

Let's finish up the code so we assign our new skill to our person property and ensure that are UI works as intended. 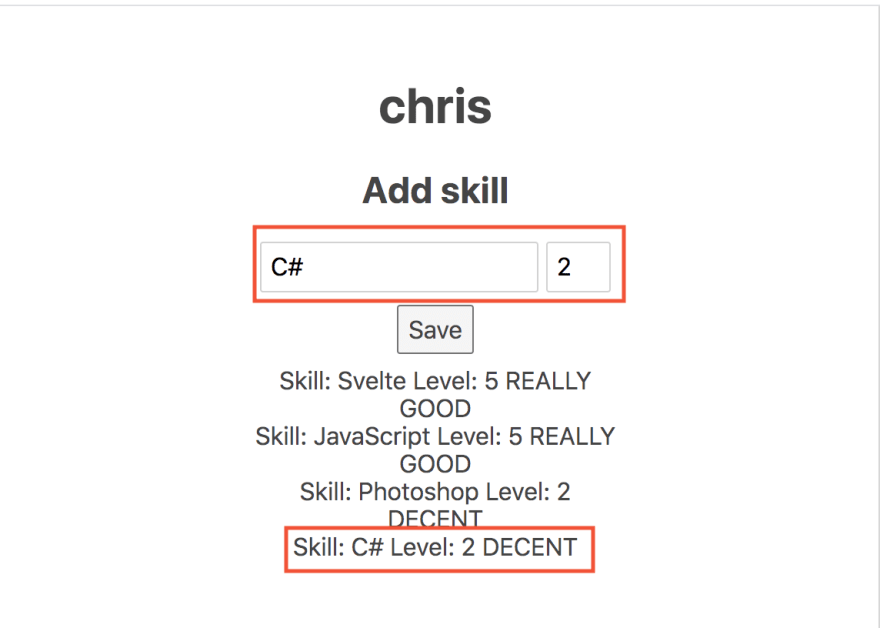 I thought I would stop here. This article is already long enough. I plan many more parts on Svelte and this is how much I think you can digest in one go. In the next part let's how to work with routing and tests, cause we have those as well.