I spend a good part of my free time working on open-source software (OSS) on GitHub, and I do it (mostly) for fun and learning new things. But one thing that I can tell you is no fun, is losing time hunting bugs that I cannot reproduce... Or fighting with tools supposed to help you, like your continuous integration (CI) system.

Did you ever wonder on which CI/CD solution you should invest your time? You've come to the right place!

Mandatory disclosure: I now work for Microsoft, but I started thinking about CI migration way before switching job and I was NOT forced to do this in any way. My experience with OSS projects goes back far before my current job, and I tried to put my honest feedback as an OSS maintainer in this article.

Based on this, I found that Azure Pipelines currently offers the best time investment/benefits ratio in my opinion.

That may probably change once GitHub Actions CI/CD solution becomes available for everyone (planned for November, 13th). But until then I will stick with a tried & tested solution that allows me spending more time with my loved ones than fighting with build issues 🍸

What will you learn here?

If you don't care for the back story, you can jump straight into action.

It has been a few years now that I have been maintaining multiple open-source projects on GitHub, and through the years I have come to this conclusion:

Jokes aside, the last point is easy to overlook and I fell into it too many times by not adding proper tests or CI, like:

"I'm doing this mostly for myself, but I'll share it in case it can be useful to others"

Oops, did not plan for that 😱

BIG MISTAKE. Once issues and PRs come, it's too late.
Reviewing, testing and deploying fixes and new features from your contributors becomes a black hole of time lost.

After a few projects though, it's probable that you don't make this mistake anymore and that you put in place a minimal CI pipeline as I did 😎

Then it was fine. Somehow.

A few years ago, there was not so much choice if you wanted a free hosted CI solution for an open-source project. I was happy some solutions existed, given that it was, well... free.

That's how I ended up using most popular solutions such as Travis CI, AppVeyor and CircleCI. Each one meets a specific need, but not any of these are perfect, unfortunately.

For most simple projects using any of these solutions might be just enough. But over time I ran into a bunch of problems, growing with the complexities of my projects.

First comes the problem of the environment: I develop on Mac OS, the CI runs on Linux... and issues appear on Windows. That's how I ended up using a combo of Travis CI + AppVeyor, like many projects.

Then there's the issue of being compatible with multiple platform versions. For example, a project supporting Node.js >= 8 would be wise to test on all LTS version along with the latest stable version: that would mean at this time 8.x, 10.x and 12.x.

Nearly all CI services support a build matrix definition for these use cases, so that's fine.

But when you start having many projects and each one have multiple builds, total build time starts to become an issue: I already had to wait for days (!) to be able to merge some PRs because many came at the same time on different projects (and all were sharing the same worker limit). When your pipeline is already quite long (like 1h for a PR build), it can get problematic really fast.

Uncertainty is not welcome

Finally, there's the most dreaded issue that took countless hours of my life for nothing: flaky builds 😱. 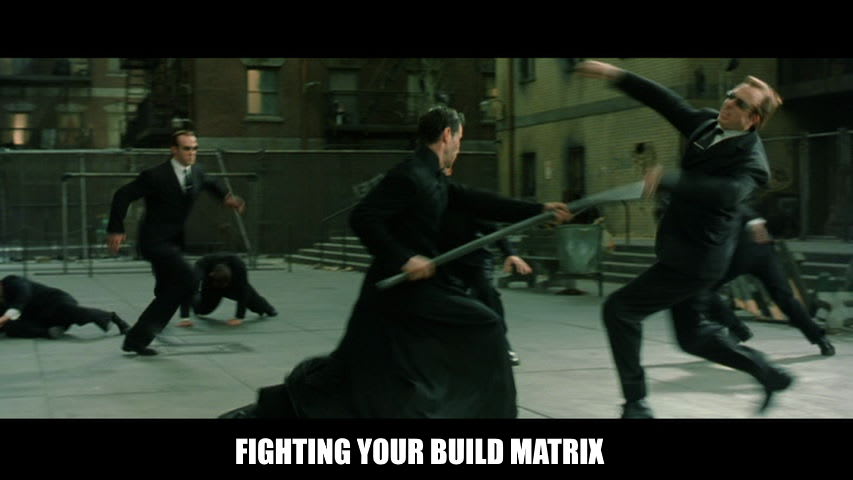 Sometimes, for no good reasons, one or many of your builds fail. And you (or your contributors) lose time investigating the issue, discovering that the CI service is the problem, not the code.

If it's only once in the while and you're suspicious, you just restart the build and it passes. But sometimes not, making you spending precious time trying to fix the CI because:

And over time this makes you wary of your own CI, which is not a good thing.

I know I may have been asking too much and most OSS projects are just fine using these solutions. And to be completely fair, given that all these services are provided for free it's hard to complain.

Some time ago I discovered that JHipster had migrated all its CI to Azure Pipelines. I knew this project for a long time and its CI complexity is nothing to laugh at, with a lot of combination paths and huge build times. So this got me interested and I tried to migrate some projects of my own to test it out.

Well, I was surprised to see that Azure Pipelines gives you quite a lot for free compared to other solutions:

I started by migrating the tests of a simple Node.js project of mine. The existing Travis/AppVeyor combo was replaced with a single Azure Pipeline to test on Windows/Mac/Linux, as done in this PR. I had to disable git autocrlf option for Prettier check to be happy on Windows, but besides that the migration was trivial.

After this first success I moved on to migrate the much more complex and demanding CI of generator-ngx-rocket, and here is the result.

The migration was not trivial this time as I had to use a template to generate the combinations matrix, but the result is great:

After this experience, I can say that I'm all for Azure Pipeline now and I will continue to migrate my other repositories 👍

Hey wait, but what about the new GitHub Actions for CI/CD?!

I give you that it looks AWESOME, especially the OSS tier 😍
Once it becomes available for everyone on November 13th, it will probably become the best solution out there (and this article will be updated in that case 😉).

At this point, you may want to try it out for yourself. We will go through the steps to put in place an Azure Pipeline CI for your Node.js project (don't go away if you use another stack, it's not much different and I will give some pointers 😉).

You can see an example result on this repository.

First, you have to prepare your test scripts for the CI.

For a Node.js project, it's usually done by adding a test script in your package.json file:

In this example, Jest will be used to run the unit tests.

You can test your script by running npm test, to make sure everything works fine.

In your Azure DevOps account, create a new project and give it a name:

After that, go to the Pipelines section on the left: 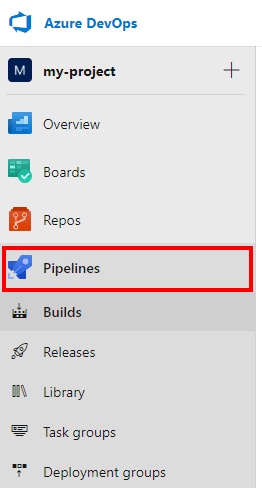 Then click New pipeline to start the setup process: 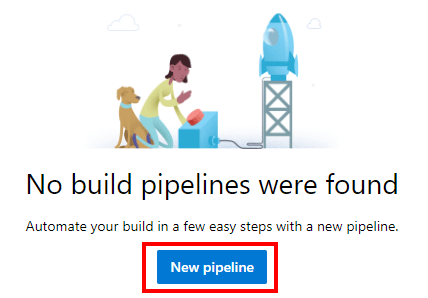 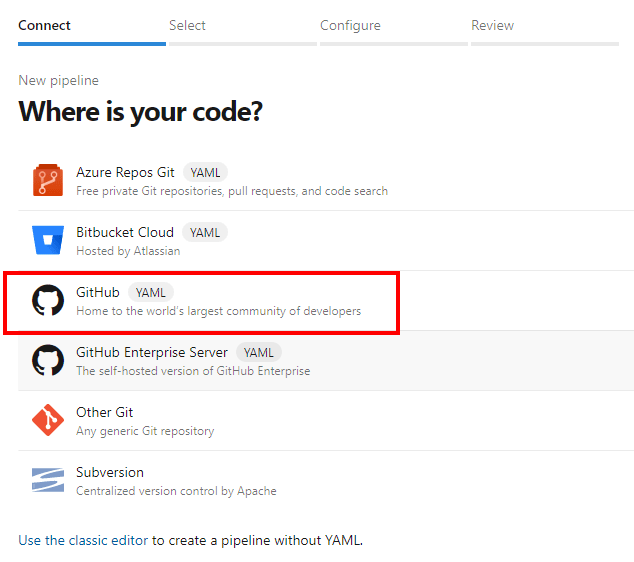 Select your repository, then authorize the app on GitHub.

After that, choose the first Node.js option (or any other relevant option for your tech stack):

For other stacks and languages like C#, Java, Go, Python and so on you should take a look at the appropriate page in the ecosystem section of the docs. You will get specific hints at how you can set up your build with your favorite tech.

You can find a lot of examples YAML files in this repository.

You will then be presented with this YAML file in the editor:

For now, you only need to change the last part to run the command npm test instead of npm run build:

Click Save and run, then choose whether to commit directly on master or create a new branch with a PR.

I suggest you create a new branch with a PR at this stage so that you can experiment with the build configuration before merging it in your repository.

After that click Save and run again, then check that everything runs fine.

Now you already have a working CI, but one of the benefits of using Azure Pipelines is that you can easily add cross-platform builds so let's do that.

Choose Edit pipeline in the menu to go back to the YAML editor: 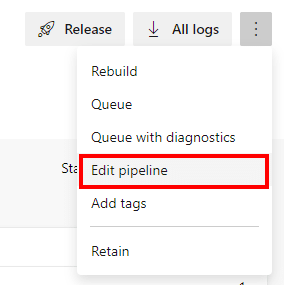 First add this matrix at the top of your file:

This will allow your tests to run on Windows, Linux and Mac OS using 2 different Node.js versions each time, for a total of 6 builds.

Then update the pool section to use the image name of the current build:

Finally update the node task to do the same for the Node.js version:

Click Save, then Run to test the updated pipeline and you're done.

If you created a branch with a PR when saving the pipeline configuration the first time, you also need to go on GitHub and merge this PR first to activate the pipeline for new commits and PRs.

Don't forget to take a look at the full documentation, to see all the tasks and features available.

I highly recommend that you add a status badge on your GitHub repository so that people get a positive signal on your project:

To do so, go back to your pipelines builds and click Status badge on the menu:

Then copy the markdown code using the button, and paste it at the top of your readme.md file at the root of your repository: 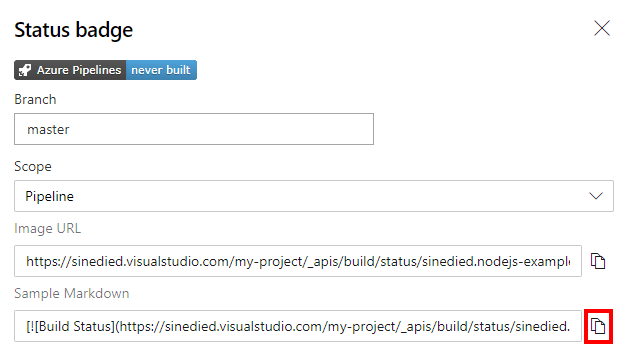 Once it's committed to the master branch it will become visible on the GitHub documentation of your project. The badge status will be updated automatically according to the last commit pushed on master.

To complete this status badge with some others, take a look at https://shields.io.
You can even build your own:

Once a new commit or PR will be pushed to your repository, the CI will take care of it and show the result directly on GitHub: 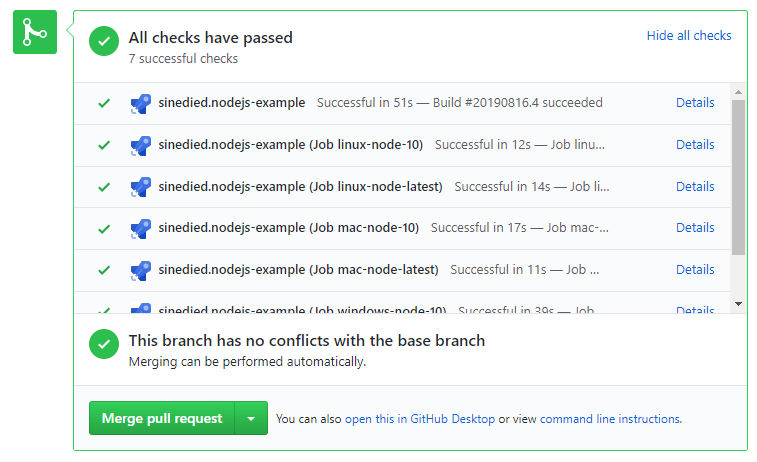 Now you can relax and enjoy your free time again 🍻.

For additional peace of mind, I suggest you enable required status check with your new CI so only PRs passing the selected checks are allowed to be merged.

Don't forget to share your feedback and experience in comments!

Of course, there are many more things that you can do to simplify your life as a maintainer and I will share them in later posts. But I think CI is one of the first things you should put in place in any project.

There's also much more that you can do with Azure Pipelines (did I mention CD somewhere?) but let's keep that for later 😉.

Contribute to Codename One during Hacktoberfest

ITNEXT on Medium.com
How to Speed Up Your Website with Azure CDN
#azure #cdn #security #seo
Learn how to setup data pipeline from PostgreSQL to Cassandra using Kafka Connect
#postgres #kafka #cassandra #azure
Yet another TODO app! With Redis and Go [Part 1]
#redis #go #showdev #azure