DEV Community is a community of 643,475 amazing developers

When you start to focus on the performance and security of your backend alongside the other features, you know that you're growing and maturing as a developer. It goes without saying but having some sort of security measure against common attacks is essential, even if it's just a hobby project.

If you're new to security or want to quickly get started with some basic protection, these 5 NPM packages will help you get started in just a few minutes. The best part about these packages is that all you have to do is just install them and use them as middleware. It's that easy!

In a hurry or just need the list of packages? Here are the 5 NPM packages that I'll be going over:

What it does: Sets security-related HTTP response headers to protect against some well-known web vulnerabilities.

What does it protect against: Cross-site scripting attacks, cross-site injections, clickjacking, MIME sniffing and targeted attacks towards Express servers by disabling the X-Powered-By header.

Helmet helps you secure your Express apps by setting various HTTP headers. It's not a silver bullet, but it can help!

First, run npm install helmet --save for your app. Then, in an Express app:

Helmet is Connect-style middleware, which is compatible with frameworks like Express. (If you need support for other frameworks or languages, see this list.)

The top-level helmet function is a wrapper around 15 smaller middlewares, 11 of which are enabled by default.

In other words, these two things are equivalent:

What it does: Sanitizes user input coming from POST request body (req.body), GET request query (req.query) and URL parameters (req.params).

What does it protect against: Cross-site scripting / XSS attacks.

Node.js Connect middleware to sanitize user input coming from POST body, GET queries, and url params. Works with Express, Restify, or any other Connect app.

This will sanitize any data in req.body, req.query, and req.params. You can also access the API directly if you don't want to use as middleware.

What it does: Puts the array parameters in req.query and/or req.body asides and just selects the last parameter value to avoid HTTP Parameter Pollution attacks.

What does it protect against: Bypassing input validations and denial of service (DoS) attacks by uncaught TypeError in async code, leading to server crash. 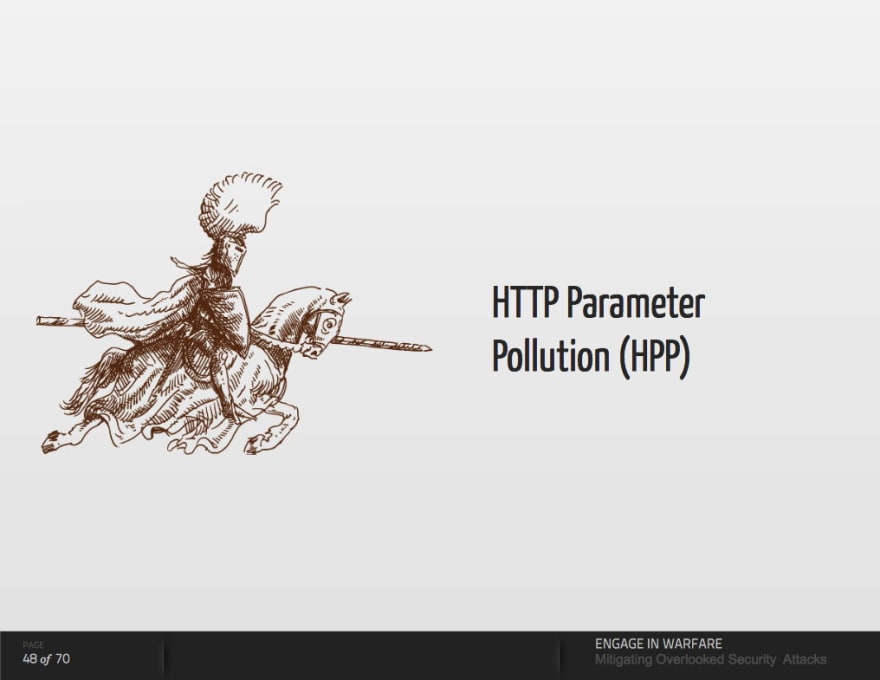 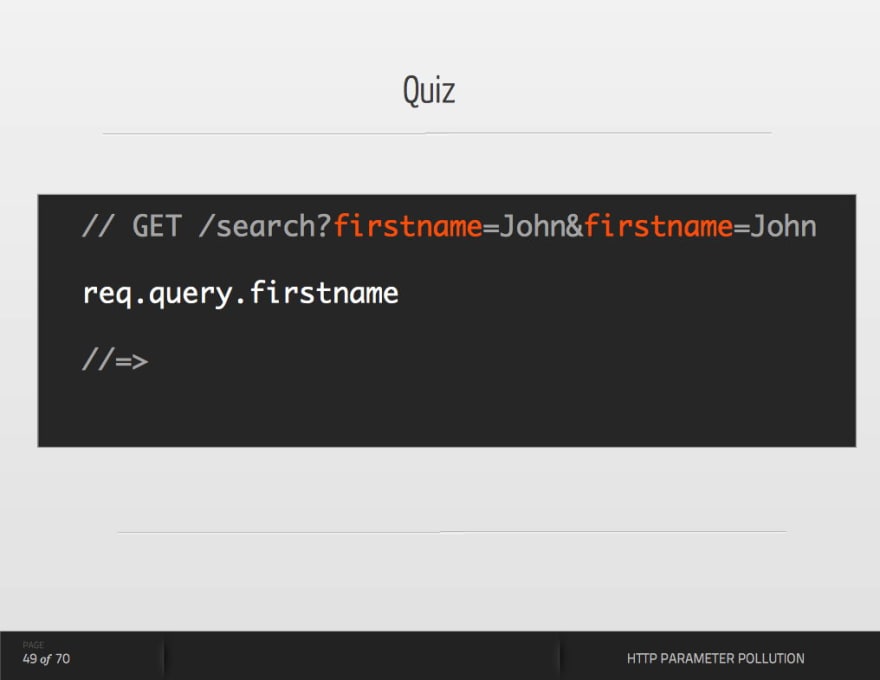 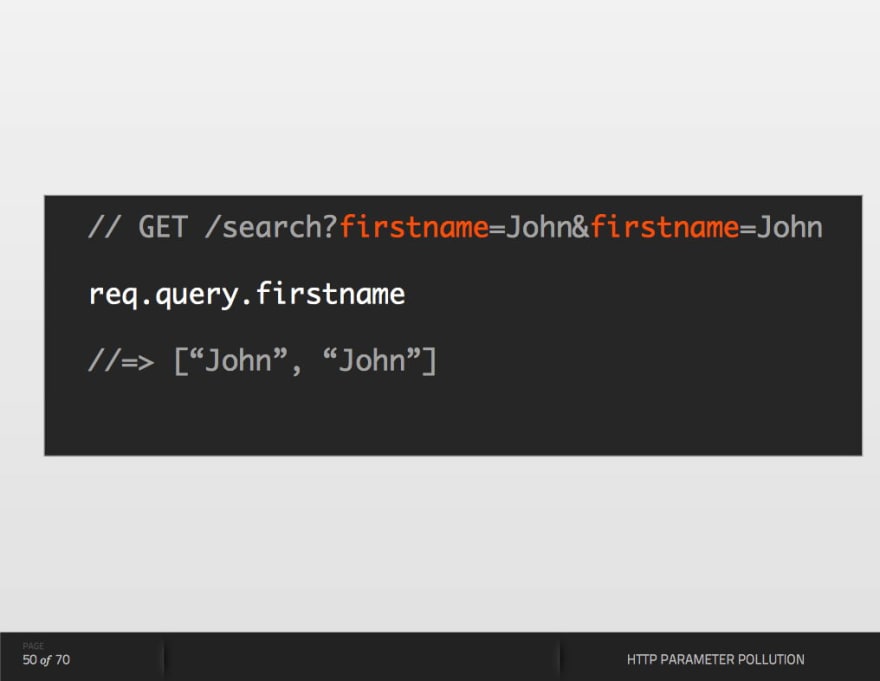 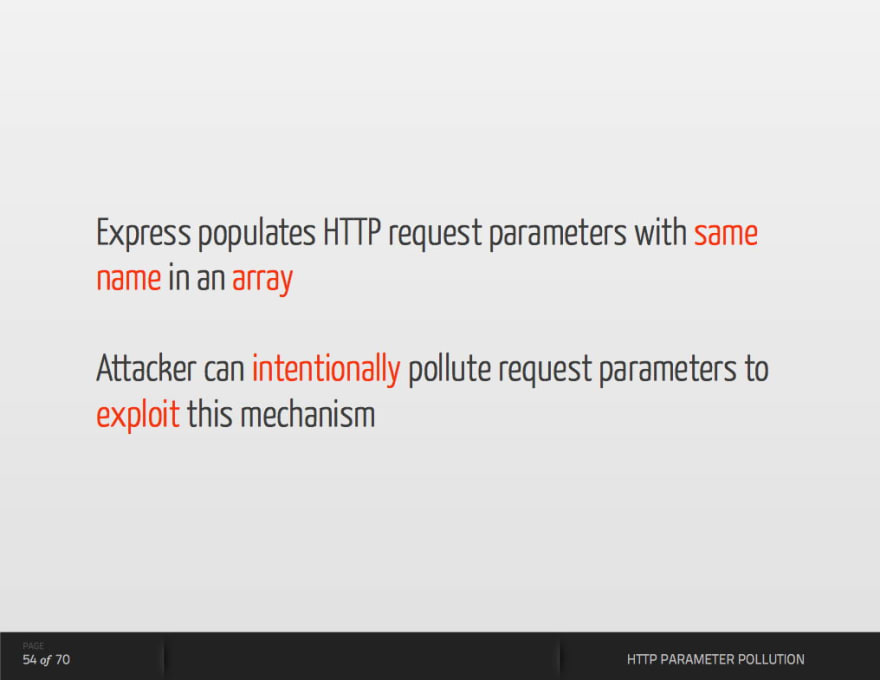 ...and exploits may allow bypassing the input validation or even result in denial of service.

And HPP solves this how exactly?

HPP puts array parameters in req.query and/or req.body aside and just selects the last parameter value. You add the middleware and you are done.

This is a module for node.js and io.js and is installed via npm:

What it does: Searches for any keys in objects that begin with a $ sign or contain a . from req.body, req.query or req.params and either removes such keys and data or replaces the prohibited characters with another allowed character.

What does it protect against: MongoDB Operator Injection. Malicious users could send an object containing a $ operator, or including a ., which could change the context of a database operation.

Add as a piece of express middleware, before defining your routes.

onSanitize callback is called after the request's value was sanitized.

What does it do: Used to limit IP addresses from making repeated requests to API endpoints. An example would be to rate limit an endpoint that is responsible for sending password reset emails, which can incur additional fees.

Basic rate-limiting middleware for Express. Use to limit repeated requests to public APIs and/or endpoints such as password reset.

Note: this module does not share state with other processes/servers by default. It also buckets all requests to an internal clock rather than starting a new timer for each end-user. It's fine for abuse-prevention but might not produce the desired effect when attempting to strictly enforce API rate-limits or similar. If you need a more robust solution, I recommend using an external store:

This module was designed to only handle the basics and didn't even support external stores initially. These other options…

With these 5 NPM packages, you can make your Node.js + Express.js application much more secure in just 5 minutes. All of the packages above are extremely easy to use, just export and use as a middleware.

What security precautions do you take? Or did I miss any of your favorite packages? Let me know in the discussion below and I'll be happy to hear your thoughts.

You have never seen this text animation before