Securing you containers is massively important and the consequences of not
doing so will put your customers at risk. However it is really difficult to do with out paying top dollar or having an experienced DevOps team to constantly monitor your images and apply patches.

As developers we want to build our products and build them fast, so if we can automate this process so that we're only notified when they're issues then great!

So today we're going to secure our images using Github actions and Phonito.io for free!

What are Github actions?

Pretty awesome huh! and you don't have to manage infrastructure like that nasty Jenkins!

Phonito.io is a vulnerability scanning tool for the everyday developer, it scans numerous databases and informs you of the latest vulnerabilities and for CI integrations its FREE to use!

So let's get started

Next time you push to your repo this scanner will run and check for any vulnerabilities that you have. Its as simple as that and FREE so there is no excuse to release software which is insecure!! :) 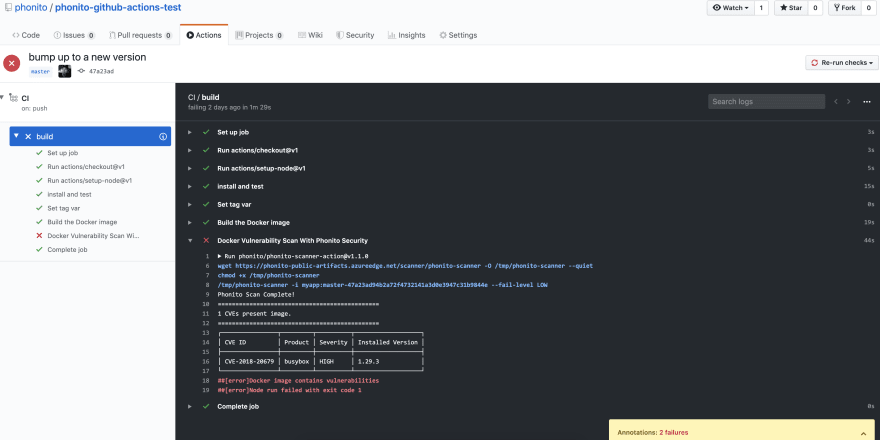 If you're stuck look at this example repo or raise an issue here.

Git at a Glance: A Cheatsheet of 30 Must-know Commands

Jake Lacey
What was your win this week?
#discuss #weeklyretro
A Step-by-Step Guide to Continuous Integration for Your Node.js Application
#javascript #devops #node #tutorial
Who likes stickers more? Software developers/computing professionals or five-year-olds? And why?
#discuss #watercooler #hacktoberfest #meta

Once suspended, jake0lacey will not be able to comment or publish posts until their suspension is removed.

Once unsuspended, jake0lacey will be able to comment and publish posts again.

Once unpublished, all posts by jake0lacey will become hidden and only accessible to themselves.

If jake0lacey is not suspended, they can still re-publish their posts from their dashboard.

Once unpublished, this post will become invisible to the public and only accessible to Jake Lacey.

Thanks for keeping DEV Community 👩‍💻👨‍💻 safe. Here is what you can do to flag jake0lacey:

Unflagging jake0lacey will restore default visibility to their posts.