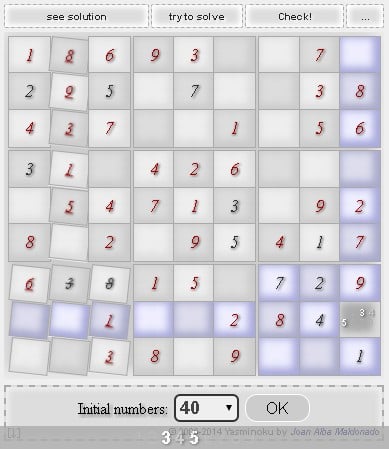 The game will generate sudokus and the player will have to solve them. But it is not only a normal sudoku game but also a sudoku solver, allowing users to introduce their own sudoku in order to solve it.

You can also change the game behaviour easily by editing many of the configuration variables which are at the beginning of the script.

This game doesn’t use any image at all, just pure HTML and CSS.

The game has been quite successful and famous, included for instance in a famous Spanish online newspaper called “Libertad Digital”.

Official languages are Spanish and English. You can find a lot of translations in other languages over the Internet, including German, French, Portuguese, Czech, Hungarian and Chinese.

Other modified and adapted versions of this game can be found on the Internet, including one Opera widget and several translations.

The new improved version (0.75a) comes with some bug fixes, using some CSS3 effects and HTML5, a better mobile devices support, autosave (using Web Storage and falling back to cookies if not supported), it is printer-friendly, it adapts automatically to any screen resolution (200 x 180 is the minimum), improves browser integration (can be included easily in any web site with an IFRAME, for example), is available for and ported to many platforms and can be ported to many more (it is compatible with Apache Cordova, PhoneGap Build, PhoneGap, Intel XDK, BlackBerry WebWorks, virtually any browser extension guidelines and so on), and is now multilingual with language auto-detection (main version includes Chinese, English, Catalan and Spanish languages and it is very easy to add new ones).

It can be controlled by mouse (or finger on mobile devices) and/or keyboard (gamepads on some devices as Wii or some remote control on some TV devices should also work).

Through the new configuration menu, you can choose language (in the case you are not happy with the auto-detected one), disable autosave, change the way the game helps you, set the number of seconds the on-the-fly calculated solution is displayed and disable some visual effects (in order to improve performance).

The game is specially designed to allow to be used inside any other web site (by using an IFRAME, for example). We just need to get the URL (which will be used in the SRC parameter of the IFRAME tag) generated by the “Share” option (inside the configuration menu). If we want to configure it even more, we can set or edit some parameters included in the generated URL (you can read more about it in the game’s website). You could even use another sudoku generator and send the generated sudoku to the game through a parameter of its URL.

Since you can choose the initial numbers, from 0 to 81, keep in mind that sometimes the game can generate sudokus with more than one solution.

Native ports that have been tested should work properly. Browser version will work virtually everywhere, in modern browsers as well as in old ones (including Internet Explorer 5.0).

To read more about how to use it in your web site, port it to other platforms, translate it to other languages, etc. please, refer to its official site below.

The repository can be found on GitHub: https://github.com/jalbam/yasminoku

Once suspended, jalbam will not be able to comment or publish posts until their suspension is removed.

Once unsuspended, jalbam will be able to comment and publish posts again.

Once unpublished, all posts by jalbam will become hidden and only accessible to themselves.

If jalbam is not suspended, they can still re-publish their posts from their dashboard.

Once unpublished, this post will become invisible to the public and only accessible to Joan Alba Maldonado.

Thanks for keeping DEV Community 👩‍💻👨‍💻 safe. Here is what you can do to flag jalbam:

Unflagging jalbam will restore default visibility to their posts.