DEV Community is a community of 637,812 amazing developers

I have been trying to learn Japanese for about 2 years now. I decided back in 2019 to learn Japanese because I was tired of reading subtitles in anime. There was always someone saying that the dubbed version is not the same as the Japanese version. Then most of the anime I watch is subbed so why not learn a language so that I can understand what’s going on when there is no subtitles.

So far, I have learned Hiragana and Katakana, how to count to 100 and days of the month. So I have not gotten far in the 2 years. But I have gotten somewhere. I would always forget the Hiragana and Katakana that I had learned. Some are engraved in my mind but some look like others that I just can’t remember. 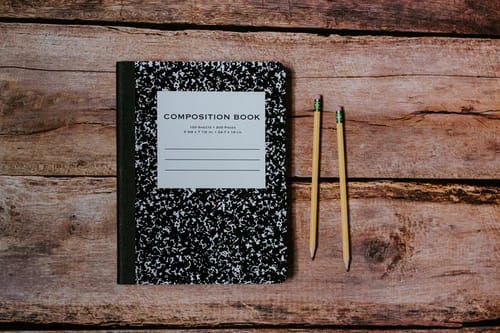 So I had to find ways to keep track of the things I learned and how to review those lessons. In the beginning, I had an OneNote notebook setup. I used this to be able use on my iPad with a stylus to handwrite Hiragana and Katakana to learn how to write them. But this did not work because I could not figure out to type Hiragana characters on the keyboard. Overall it started out as a good tool starting out. Then I was trying to organize the notebook into different subjects.

I have two notebooks for learning Japanese, one for practice and the other for note taking. I have a graph composition notebook to practice writing and to review notes by writing words that I have learned over time.

I recently watched a video on setting on a digital notebook in Notion. I have thought about using Notion for notes but I wanted to write the Kanji by hand. Then I stopped using One Note for Japanese by this time so why not give Notion a try.

I set up the notebook in the way the video had and made a template to save time on making new pages. Each lesson lives in a database, so that I can track where I am and what I’ve done.

Then another life changing video was released. This video was the ultimate task manager. The important part of this is that all tasks and are filtered into projects, all within one database. The thing that made this so important was having the ability to have recurring tasks. What better way to keep track of lessons and bring them back to review at a later date. I could do a lesson, learn some new words and set it up as recurring with X amount of days. So everything I learn come back depending on how well I know it.

This brings me back to paper and pen. In my composition notebook, I can write the words over and learn to recognize them and how to read Hiragana by not relying on the Romaji. Then for another review session, I can rewrite the notes that I took in the other notebook.

When I first started off, the first thing that I needed to learn was Hiragana and Katakana. So this was the only thing that I focused on. I am still learning this after 2 years. I know them, but I not as fast at it as I want to be. I want to recognize them they way I recognize the alphabet in English. I want it to be automatic.

There are other YouTube channels that I have came across that helped me understand what to think about when learning a new language. But those are not language based like the ones above.

I started out in this book learning greetings and making notes in One Note. Then I stopped using this for a while. I wanted to stop using Romaji to identify Japanese sounds. So this is where my focus is now.

RealKana is a website to practice Hiragana and Katakana. It is similar to the Kana app for iOS.

If you want to use the database to track your tasks and projects, here is the link to duplicate it: