...so just give me all your data and I will quickly use one of those boosting ensemble libraries like XGBoost or LightGBM or probably Catboost and then do some stacking and give you a very high performing model! That's how we roll! - hmmm, You Wish! 😆

If you really want to be a great AI engineer, you need to first understand your data and build intuition about your data and this is where Exploratory Data Analysis (EDA) comes in!

The ability to dig into data and derive trends or patterns or relationships is a superpower! 😊. EDA helps you get a better understanding of your data, validate your hypothesis, derive insights and new features in order to get the best performing model.

So, from lines 1 to 11, some python packages are imported; and then some display options and styling are set up:

Then, from lines 14 - 20, the data is read in and the process of data exploration begins:

Now, at this point, we really need to understand what each feature actually represents because it will determine the data type which informs how that feature is preprocessed - and feature preprocessing plays a role in deciding the model to be used in order to gain optimal performance. Also, understanding each feature helps feature generation. You see how all these ties in now right?

So, we have to do some research (in this case, get some domain knowledge about ship transport as regards the titanic) to know what each feature entails. Here, we explain some features and see that -

Now, let's take a look at the concise summary of the dataset produced by train_df.info() below: 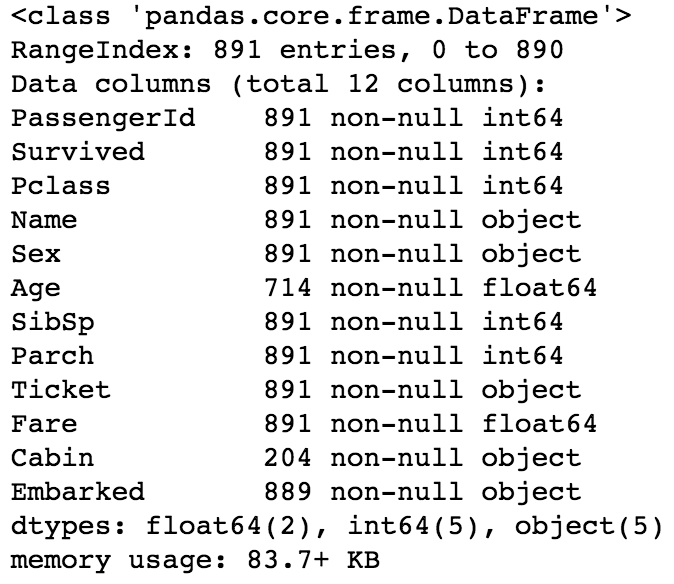 Looking at the summary of our dataset above, getting some kind of domain knowledge via research on the data would help us in a number of ways -

So, this is just a tiny little bit of the process involved when you are starting out the exploration of your datasets! Stay tuned for the next parts on this topic, on this same series, where we look at what statisticians call the Five-number summary, then we will start ** analyzing each individual feature** and then go ahead to understand feature relationships and more in order to squeeze out all the insights from our data! Now, you make sure you have an amazing week ahead! 😉